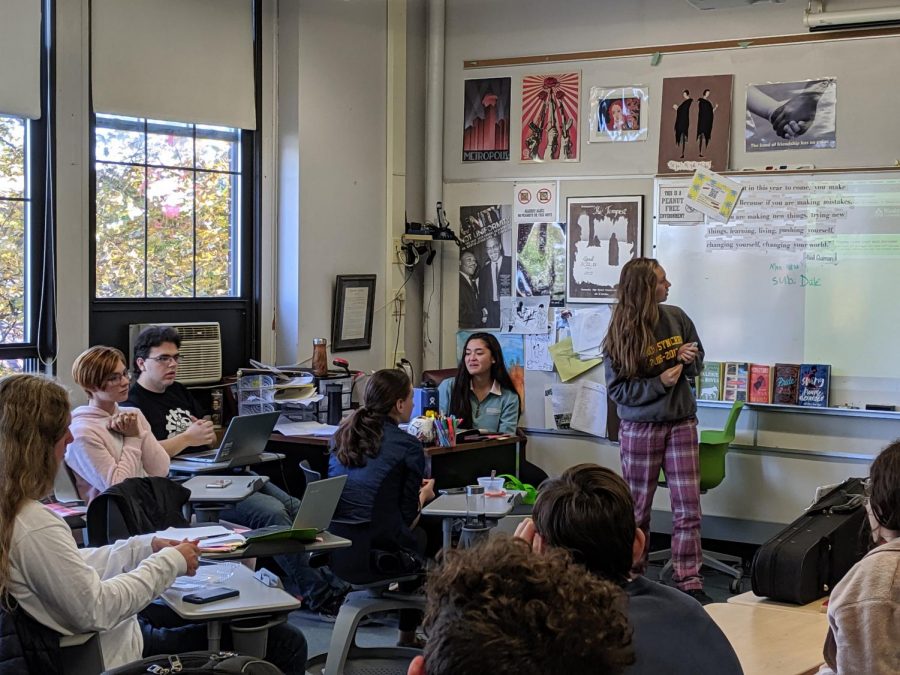 On Monday Oct. 28 (pajama day at Community High), Forum Council (FoCo) started its meeting by moving the club photo to the end of the meeting, and voting to see if the meeting notes should go on the school website. After that came a quick check in with representatives. No forum reported finding any issues in the guidelines and all felt their forum was progressing well in the choice of Multi-Culti topics.

Multi-Culti is an annual celebration at Community which takes place directly before thanksgiving break. The day includes both a ceremony celebrating the money the school has raised for Food Gatherers, and a time for student to circulate the school eating and learning about the culture, or aspects of a culture, each forum has researched. In the past there have been multiple issues with the second piece and forums misrepresenting or appropriating culture, and simplifying and minimizing cultures. In an attempt to avoid these issues, FoCo must approve each forum’s plan for what they are learning about and how.

The main goal of the day’s meeting was to approve all received MultiCulti plans. The DeWoskin Forum plan to cover Chinese New Year was approved because they showed good planning and connections to China. The Root Forum plans to cover Yule, it was approved as they showed a lot of preparation and knew which specific Yule tradition they were covering. The Coron Forum was approved for the Basant festival. They were approved because they have a forum member who has volunteered to help direct research, and a good idea of especial focus points.

The M. Johnson Forum’s plan to learn about tea ceremonies from around the world and tea’s historical importance and spread was approved. Kiley Forum’s Sage Iwashyna, brought in their plan to look at dumplings and similar foods (like pierouges) around the world at the end, which was similarly approved given a history of each dumpling like dish would be provided.

West Forum’s plan to learn about the “Art of Bob Ross” was left “under review” until next Monday. The main worries that Forum Council voiced about the Forum’s idea included: making sure learning happened, keeping culture involved, and not letting it devolve into a biography or happy trees. Both J. Johnson and Anderson Forum’s were also left under review pending more complete plans.

Next Monday, FoCo will look at all the remaining forum plans (which need to be in by Nov. 3) and given time, look deeper into how much middle school recruitment should change after a fairly drastic change for the better last year.