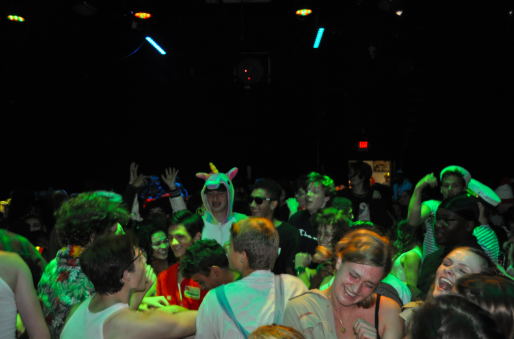 The annual Dewoskin Forum Halloween Dance took place at CHS on Oct. 25 from 8-11 p.m. The event is run by the Dewoskin (DWOW) Forum, and has been for over 25 years. Forum members spent time before the dance decorating the halls with spider webs, pumpkins, skeleton posters, and various other Halloween decorations. Community Ensemble Theatre (CET) students also helped prepare the speakers and lights. CHS student Even Ash served as the main DJ for the event, along with assistants from the DWOW Forum.

Anxiously waiting students were let into the building at 8 o’clock sharp. The black box of the Craft theater was illuminated by flashing, multicolored lights hanging from above. Many students dressed up in costumes. CHS junior Meri Orosz dressed as Squirrel Girl from the Marvel universe. For her costume, Orosz spent nearly two days of work on just the tail alone.

“I just like to make things,” Orosz said. “I’m an artistic person, and I’m passionate about the character I’m dressing up as.” Of all the costumes she saw, Orosz’s favorites were a glittery She-Ra costume, a Tony Stark costume, and her friend Siennah Duchateau’s Scarecrow costume.

“I think that the reason so many people dress up is that it lets us get into our creative side,” Orosz said.

Evan Ash, the DJ for the dance, thought it went really well. “I like making people happy, so having that opportunity to get on stage and try to get people excited was just fun,” Ash said. “I love Judith. I think what she does is really cool.” Ash thought the job of DJ was also a very stressful one.

“Everyone only wanted me to play rap songs, which is fine because I love rap songs, but I did feel bad for people who didn’t like that kind of music. But we’re teenagers, we don’t like all the same forms of music. I think that was the one thing I learned… it’s hard to please everyone.” Overall though, Ash enjoyed his time as a DJ.

“I know one kid even hurt his ankle dancing. So I made the dance hype enough that bones were breaking,” Ash said.
“I would give an A+,” said DWOW Forum leader Judith Dewoksin. “And I would give it an A+ because of the participation of all my forum students, the wonderful DJ, the people who worked on the lights, the deans and Kevin who were very supportive, and 300 plus students who just danced and had a great time.”