Voters Head to the Polls on Tuesday 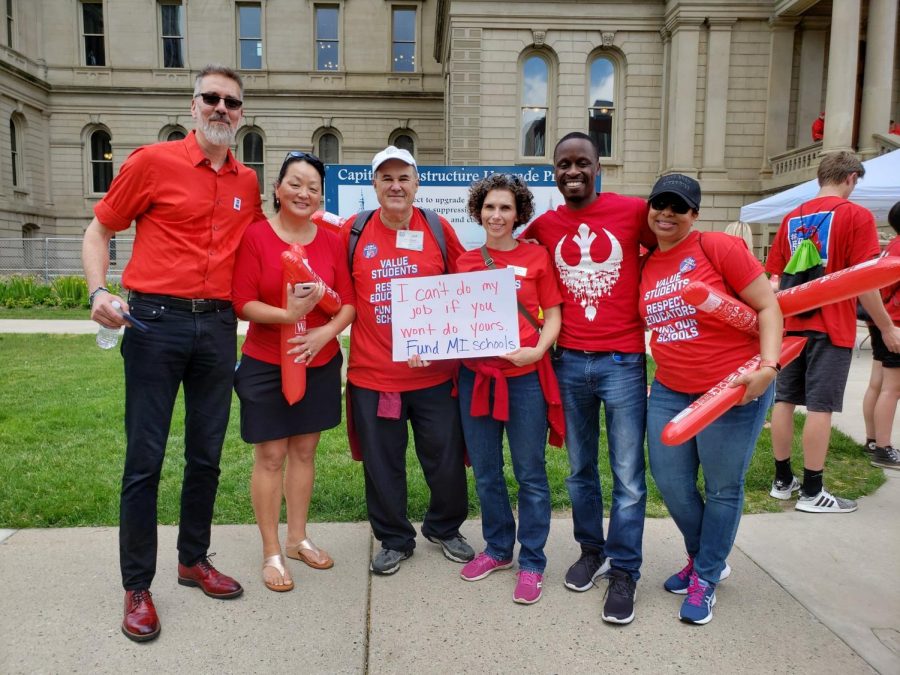 In 2019, AAPS board members gathered in Lansing to rally for changes at the state level.

On Nov. 5, students in AAPS have the day off from school. While students are frolicking and enjoying their day off, registered voters will be voting on a one billion dollar bond.
The money will be used to “upgrade school facilities and sites, enhance existing building security, and provide upgraded and sustainable learning environments throughout our district,” according to the AAPS site.

Of the five teachers contacted, none of them were willing to go on record. In an article on MLive, there were two main concerns for residents who are voting no. The first was the daunting amount of one billion. The second was that voters felt that the AAPS needed to form a more detailed report before asking for the bond.

In an article by Michigan Radio, elementary teacher Anita Ringo expressed her concern with excuses that teachers can not be paid more until funding is changed at the state level.
This is something that is starting to swell up in districts like Ann Arbor because we cannot handle it anymore. We have to pay our teachers more, and the only way school districts can do that: we have to work with our legislators to make sure they fund our schools properly,” Ringo said.

The AAPS argues that the repairs are needed as the average building is about 63 years old and five buildings are about to turn 100 (including Community.) Two years ago, a commercial real-estate inspector was hired by the AAPS and found that while the schools are currently in good to fair condition, without development they will fall into the poor raking (Community was projected to need 4.8 million dollars of repairs in the next two years.) They also argue that temperature, lighting, air quality and noise make it hard to learn and negatively impact classroom experience. The bond would fund upgrades in all AAPS schools over the next six years, including air conditioning, solar power, LED lighting and more. Two new schools are also planning to be built to accommodate rising populations.

The bond would also raise taxes. On average, according to AAPS, there would be about 19 dollars a month average (228 dollars annually) added to taxes. The AAPS argues that even with this increase, homeowners within the AAPS district would have the lowest school debt millage rate in Washtenaw County.

What AAPS board members are saying:

Jessica Kelly, Trustee
“The general fund money that we’re legally allowed to use to pay teachers/staff is separate from the bond money we use to take care of buildings, musical instruments, buses, computers, etc…unless we don’t have bond money. If we don’t have bond money, then we have to use general fund money to do those things, which leaves less for wages. It’s illegal for us to have a bond or millage for wages, so we ask for bonds and millages for the other things so we can protect the wage money. Passing a bond is one way that we prioritize teachers/staff, even if it looks indirect.”

Harmony Mitchell, President
“This board is looking for options to better compensate our staff often. Almost 90% of our general fund is used towards salaries and benefits. Our goal with this bond is an attempt to protect that general fund as much as possible. Michigan is failing at adequately funding it’s public education. Districts are being forced to choose between safe buildings and books. I find it appalling that school infrastructure isn’t funded through the state.”

“The school district, similarly, has experienced cuts in state funding, the primary source for operating funds, including salaries, over the last decade. In fact, the per pupil foundation allowance that AAPS receives is less than it was a decade ago. This has restricted the district’s ability to provide teachers with the increases they had traditionally been receiving in the past. I would add that while the lack of funding from the state is in part due to the recession of 2008, it is also due to their attack on traditional public education.

Another fundamental aspect of school funding is that while operating funds are distributed by the state, infrastructure must be funded locally through bonds, sinking funds, etc. In essence, they are independent of each other. Local millages can not fund salaries and other operating expenses. In fact, teacher salaries are affected by local millages only in so far as, if millages were not passed, then operating funds would have to be spent on repairs and other infrastructure needs, further diminishing the amount that’s available for salaries.”