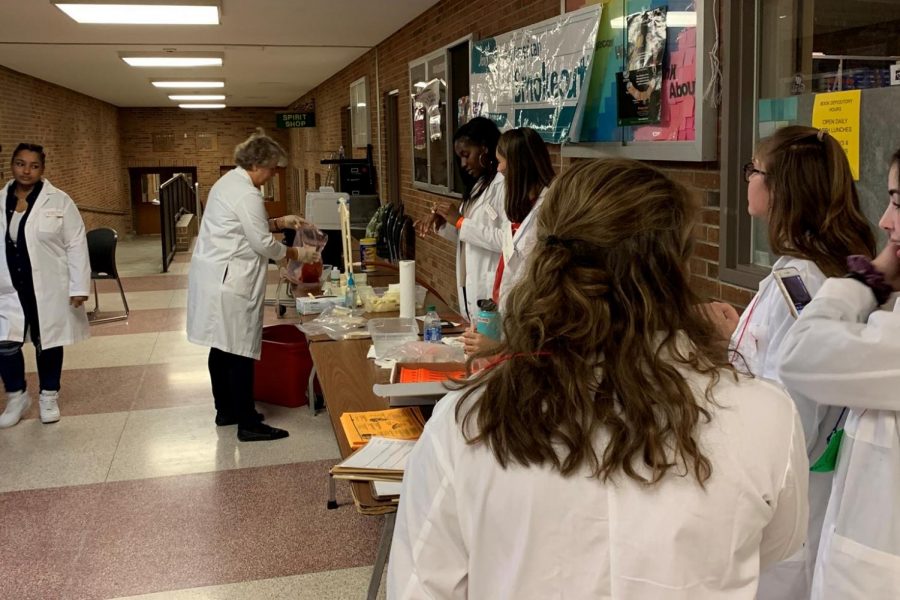 Health Sciences students stand at the tables preparing for the next group of their peers to come through. They took shifts between the two classes working at the different stations.

There were various interactive stations positioned throughout the halls near Huron’s cafeteria. Teachers brought down their classes to the stations to be educated on smoking.

One station included two sets of pig lungs, one healthy and one treated with the harmful chemicals in cigarettes. Students had the option to put on a glove and feel the difference in the two sets of lungs.

Another station allowed students to test their blood oxidation levels, run up and down some stairs, then test them again. The second time around they were asked to breathe through a straw and pinch their nose to simulate how it would feel to breathe with emphysema, a disease caused by smoking.

Khanna walked through the halls asking students if they know the truths about smoking and vaping. If they knew the statistics, she would give them a piece of candy.

“I had a lot of fun questioning kids about what they knew,” Khanna said. “It was interesting to see how little they actually knew about cigarettes and smoking.”

Leading up to the event, the class spent a week learning about the dangers of smoking cigarettes and using vapes and hookahs.

“I had no idea the kind of long term effects JUULing could have on the young brain,” Khanna said. “It was very eye-opening.”