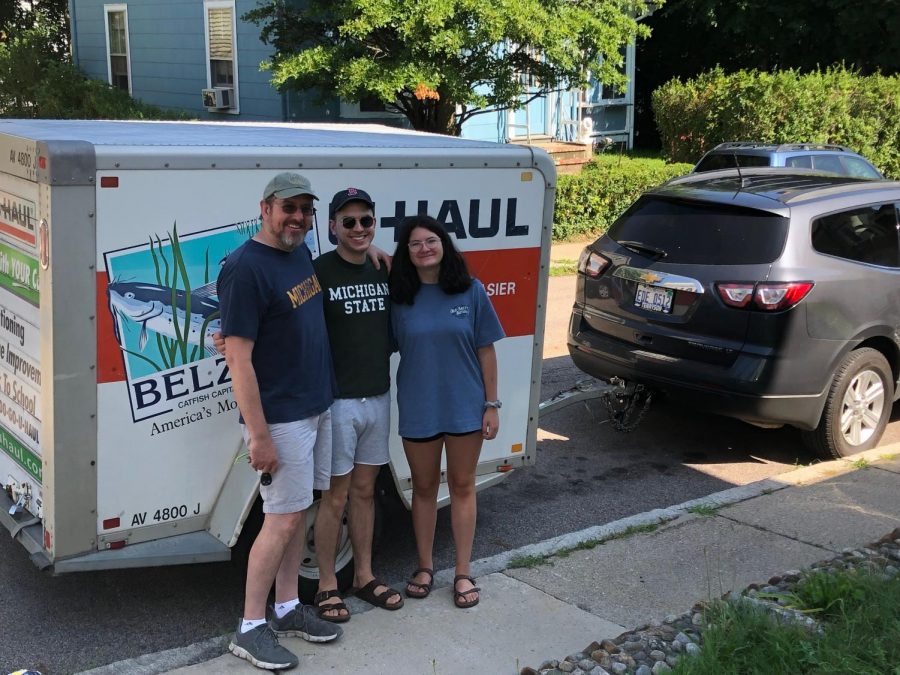 My brother didn’t think he would be accepted into any of the graduate schools he applied to. Out of the 11 schools he got into Dom choose to go to Harvard. Although now it’s hard to live up to a brother who goes to Harvard, I like to remind people that it isn’t the best graduate program for what he does. The night before we left for Boston to move my brother into his apartment, my dad and I packed up the u-haul trailer. As we sorted through the many boxes in the garage, my dad said, “Does Dom really need 15 coffee cups?”

“Obviously he does.” I mocked.

I woke up at 4:30am the next morning and we loaded our luggage into the car. The snacks were packed near the front along with the chargers and computers. In the car, falling asleep almost immediately, I woke up just in time to see the pink and orange sunset.

“You’ve been asleep for 3 hours.” My brother said with envy. I pointed out that we woke up several hours before anyone should. The first stop we made was for gas and breakfast. We chose McDonald’s, but only because that’s what my Dad wanted. We arrived at our family friends house after a second stop for McDonald’s and many rounds of MindTrap.

The drive to Cambridge was filled with weird turns and, “Are you sure this is the right way?” It was still cool outside and you could see the dew on the grass of the lawns of the people who lived in townhouses. My dad had to park almost a block away, even though we had to carry all Dom’s stuff into his apartment.

“Do we really have to park this far away?” I complained. My dad rolled his eyes. He was parked  illegally already and had no patience for my whining. We started with the boxes, loading them onto a trolley and pushed it all the way down the block. People wearing Harvard t-shirts or a patriots hat watched as we walked. My brother was not far off from the apparent dress code, wearing a red sox world series shirt. The bodega we past wafted out smells of fresh sandwiches and chips. We went up the elevator to the third floor and dropped the boxes off, then went back for more. When the trailer was completely empty, we started to unpack and build furniture.

“This is nice,” my dad said as we walked in. It had mostly white walls and details that reminded me of an antique store. It was small, but not too small for two graduate students. The kitchen was exactly how you would picture an apartment kitchen to look. Kind of dingy and the dishwasher doesn’t work very well, but it has just enough counter space to make up for it. Dom had brought all the Michigan decor he could fit without having to leave some of his pots and pans in Ann Arbor. Pictures of the Big House and block M’s made it impossible to walk in and not know where he was from.

“Is your roommate going to be okay with this?” My dad questioned gesturing to the decor.

“He better be,” Dom replied.

By the time we were almost finished with unpacking, the heat was almost unbearable. We decided to leave it and Dom would unpack the rest after he came back from our Grandparents house.

I had another week before I had to say goodbye to my brother. My mom and other brother were flying out to help us clean the house. Some days were spent at the beach, some loading trash into a dumpster and others eating our weight in seafood. The beaches in Rhode Island At the end of the week, we had to say goodbye to my brother. He was taking a train from Kingston, Rhode Island, down to Cambridge. The whole family woke up early so we could have one last breakfast with Dom before he left. We all sat around the brown table, coffee creamer and jelly packets as the centerpiece, talking about the good, exciting, and sad times we had when Dom lived in Ann Arbor.

We sat and waited for my brother’s train, stomachs full of eggs and hash browns. My mom had her almost opaque sunglasses on to hide her puffy eyes as she watched her firstborn get ready to move away from home for the first time. The train pulled up and I let out a breath of air before I stood up to hug my brother goodbye. I knew that I would see him in a couple of months and that this goodbye wasn’t forever, but it still felt that he would be moving on and doing bigger things that I wouldn’t be there to see. He stepped on the train waving goodbye one last time before he found a seat to settle in for the hour long ride. My mom turned to seek comfort from my dad as the train speed away and I thought about the football game he promised we’d see when he came to visit.