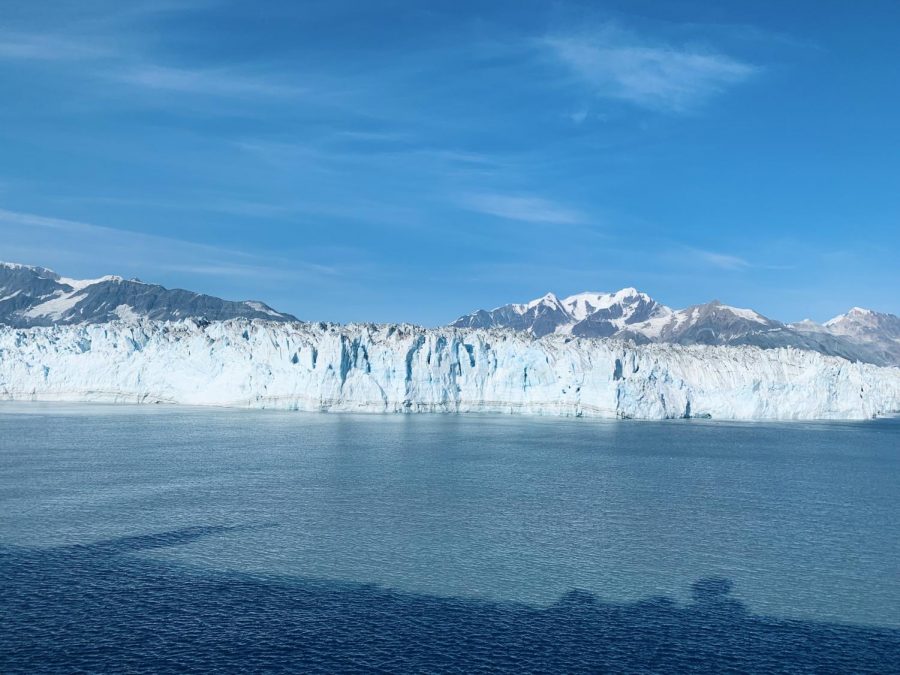 When they found the quietest part of the bay, the whale-watchers cut the engine. We watched and waited in silence, searching — willing — for a whale to grace us with her presence. A few minutes passed. Nothing. I leaned a little closer to the large open window, scanning the water for anything that moved. I thought about how amazing our Alaskan journey had been so far, but how it would seem incomplete if we left having not seen a whale. Our stops at Whittier, Anchorage and Ketchikan had been a preface to this stop in Juneau. This stop was where we would see the whales.

“There!” My cousin suddenly gasps. I spun around to where he was pointing and saw three small brown humps bobbing in the water. The guides told us they were porpoises, and although they were not the animal we had come to see, they were captivating. They circled our boat and we watched in amazement as they played. I envied them, as they freely chased each other and frolicked about without a care in the world.

We heard the engine starting and turned our attention back to the guides. We had been so distracted watching the porpoises that we hadn’t noticed a fountain of water spraying up from the ocean in the distance.

We were about to see our first whale.

As the boat came to a stop, a huge, grey mound came into view on the right side of our small boat. This was the moment I had been waiting for since the day I found out we were going to Alaska. For a while, the mound sat so still that it resembled a dune you could climb to get a view of the surrounding water, glaciers and snow-capped mountains. But then, the mound started to move. In slow motion, we saw its fin rotate 180 degrees across the surface of the water, and as it dove back down into the dark world beneath the waves, its tail rose as a grand finale.

I was transfixed. Nobody in the boat said a word. I couldn’t understand how an animal that massive could exist on Earth. But there it was, in the freezing waters of Southeastern Alaska. One second we could see it on the surface of the water. The next, it was gone. We could only imagine that it was still down there, somewhere.

That mound was named Sasha. The next mounds we saw were named Flame, Bunsen, Juneauite, and a few that hadn’t been identified yet. We saw eleven whales that morning.

At the end of our journey, we thanked the guides and headed back to our cruise ship. The rest of the night felt like a return to normalcy. The staff offered us dinner and we watched TV. With the same Friends episode we had watched earlier playing like background noise, my mind began wandering back to that small, seemingly insignificant boat. I know I will never forget how I felt watching those whales. Those huge, carefree creatures really gave me some perspective.

I suddenly imagined myself as a whale. I watched myself playfully diving into my own world, only worrying about where I would find my next meal. Then, when I broke the surface, I changed the lives of anyone who was lucky enough to see me. I imagined myself not worrying about friends, family and school, but instead, being a light that brought happiness to those around me. This became my new idea of how I wanted to live my life. To feel as free as a humpback whale.