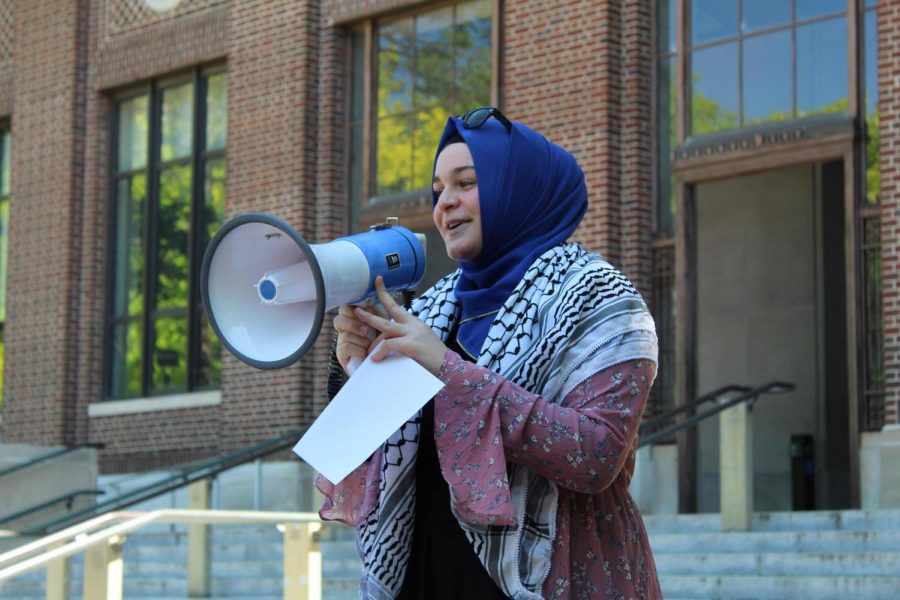 Zaynab Elkolaly is an 18-year-old activist from Ann Arbor, Michigan. She played a significant role in the Washtenaw county climate strike on Sept. 20, 2019, and is planning even more significant events.

“I am very proud of my Arab and Muslim identity. I got introduced to activism when I was ten and realized that my existence was provocative,” Elkolaly said. Elkolaly co-founded the Washtenaw County Climate Strike, believing her love for arguing could be a force for productive change.

The media covers white activists like Swedish teen Greta Thunberg but rarely covers activists fighting for minorities and their relationship with climate change. For hundreds of years, indigenous groups and black communities have been fighting for the same thing.

“I find it ridiculous,” Elkolaly said. “Indigenous and black people have been fighting this for decades, literally decades. Getting killed, being forcefully moved, but now this white girl protest in front of the Swedish parliament, and everybody is hailing her as a savior.”

Elkolaly does not hate activists like Greta Thunberg; she believes the white faces of youth-led movements are just too familiar.

“It is always the white girl,” Elkolaly said. “Alternatively, just white people instead are put in the faces of youth-led movements to make them seem more marketable in a way that makes them more familiarized. That’s unacceptable. What people do not talk about is the imperialism and colonialism that sort of instigated climate change. It’s European powers entering middle eastern countries and stealing the resources, mainly their petroleum, and starting the industrial revolution which we now know is the start of all this crap.”

To combat this, Elkolaly believes the easiest way to make sure that we have a diverse and intersectional movement is to put diverse people in leadership positions.

“I guess you have to be within like the organization, but you’ll find that the white organizers are given all of the media and PR opportunities, or they will take them for themselves,” Elkolaly said. “They do not know how to take space and give space. We will have these POC doing the brunt of the work, whereas the leaders of the organizations are getting all the attention.”

However, to shine a light on these activists is something we can all work towards to achieve. Elkolaly’s organization is working with both POC and white people to create an excellent and diverse scene.

“What my group is doing is incredible,” Elkolaly said. “We have Logan. She’s a white girl, and she’s very involved in the group, but she never takes PR opportunity. She always passes it along to us. Thus, this form of Aliship from white members of an organization is incredibly important.

Environmental racism is affecting students close to home in Flint, Michigan. Flint still does not have clean water, causing many to believe that if Flint were rich and mostly white, then the issue would have been solved. Indigenous populations are struggling with changing environments. Glacier melting in higher regions, lack of resources in the arctic regions, and loss of vegetation, to name a few. The work of many black, brown, and indigenous climate activists is overlooked.

“We really just need media to be cooperating with these organizations making sure that POC is the face of the movement rather than white girls,” said Elkolaly. “I try to get the media to pay attention to these voices that aren’t being heard.  We have put in these spaces where we want to do it, but we don’t want to offend anybody. So what needs to be done is that these opportunities need to be specifically designated for POC and in terms of journalism, cover POC.”

Activism is an excellent way for students to get involved with their communities while also supporting great causes. However, what many do not realize, is just how long people of color and other groups have been fighting for set issues.

The Trace.org states that “African-American children and teens are more than eight times more likely to die from firearm homicide than their white counterparts.” White people’s involvement with these movements is covered far more than the groups who are severely affected.

“The climate movement young people have been fighting for their lives,” Elkolaly said. “It is a matter of getting affluence sort of blind people involved what’s there to gain. And you’re seeing this trend right now. People using it for college applications, using activism to make themselves look good in an appalling way. Why are they doing it? You know. It theoretically doesn’t matter why they are doing it so long as they’re doing it. All these different questions. But for people that do genuinely have good intentions, they need to understand that they do have the power they have more power than they believe that they do because this is going to be our planet.”

The Climate Strike group is planning an even bigger strike for Earth Day, one that will be a lot less comfortable.

The University of Michigan has billion-dollar investments in the fossil fuel industry.

“The university invests billions of dollars into carbon and energy, and it is so bad, and we have been hounding the president of U of M for so long, and she is still to meet with us,” said Elkolaly. It is not surprising that the president will not take Elkolaly and her fellow young leaders seriously.

“You have a lot of high rolls,” Elkolaly said. “A lot of “oh, you just have youthful optimism,” It’s quite annoying to be treated that way from middle-aged adults. Nevertheless, what can you do? You can just rise above it. So I show them results. The best revenge is a success. If it gets a little aggressive, I like to combat them with, ‘What were you doing when you were 17? Getting high?’ You are criticizing me for doing outstanding work at a young age.”

As long as an activist is like Elkolaly, the POC activists will have a more significant role in the movement. The media needs to cover groups who are fighting for change, not just white-European girls. It is essential to realize the threat climate change has on all of us, and working together is the only way change can occur.