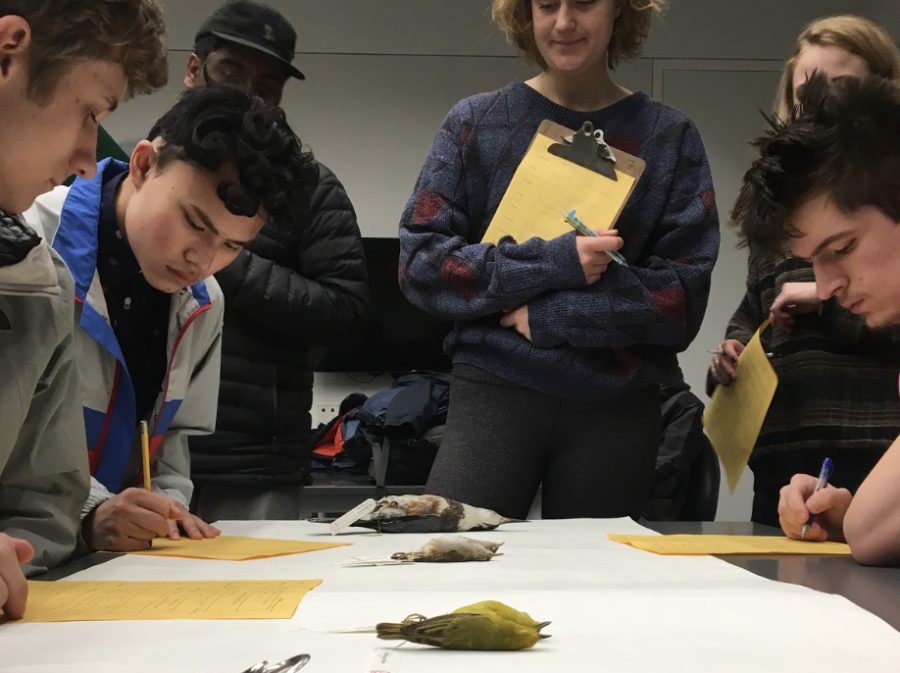 Ecology students take notes on the birds — they'd been warned not to touch them, as some of the birds may have had residual arsenic on them.

Bird bodies lay spread out on the tables, tagged and stuffed with cotton. They were there to be observed, and observed they were. Students were spread all around the room taking notes on the specimens, some going so far as to pose with them for pictures. The room was full of the dead, but was somehow bustling with life.

The class was granted early access to the University of Michigan’s newly-renovated Natural History Museum and their extensive taxidermied bird collection. The field trip was in conjunction with the class’s current unit on the birds of wetlands; most of the birds were ones students had already studied. While it may seem like an off putting way to spend a morning, many of the students were more curious than queasy.

“It didn’t faze me,” said Community senior Max Steiger. “It was extremely valuable [to see the birds in real life].”

“It was crazy to see what they looked like in real life, cause we just see pictures.”

White also learned a lot from the guide, Brett.

“We talked to him about the common loon. He showed us the patterns and . . . the same general area on their neck where they usually have white spots.”

Upon being asked what he felt he gained from the trip, White responded: “Just getting to see that there is something like that in our community is kinda sweet… That’s definitely an advantage of living in a big college town… It made me feel grateful.”

Courtney’s Ecology class has been visiting the Natural History Museum for years now. Judging by student reactions, it seems safe to deem this year’s trip yet another success.