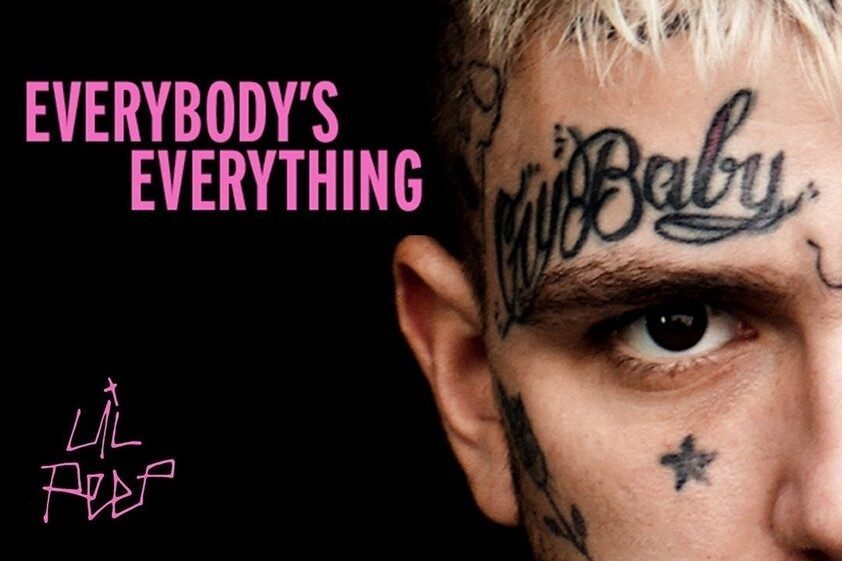 Artist Gustav Åhr, better known by his stage name ‘Lil Peep,’ died on Nov. 15, 2017. Exactly two years later, an album called “EVERYBODY’S EVERYTHING” was released by his coworkers and loved ones.

The album title is a tribute to one of the final captions Lil Peep posted on Instagram before his death:

“I just wanna be everybody’s everything I want too much from people but then I don’t want anything from them at the same time u feel me I don’t let people help me but I need help but not when I have my pills but that’s temporary one day maybe I won’t die young and I’ll be happy? What is happy I always have happiness for like 10 seconds and then it’s gone. I’m getting so tired of this.”

“EVERYBODY’S EVERYTHING” was also the name of his documentary to which the album is the soundtrack of. The movie was released on Nov. 14, the day before the album.

“Fangirl” was one of the main songs previewed for the new album they leaked the beginning of the song for advertising. It was one of the songs that stuck for people and excited them for more music. “Fangirl” is one of the best songs on the album because it starts strong and is able to keep an upbeat tempo.

The song starts with a soft guitar melody and the taglines of the producers, Fish Narc and BetterOffDead. Suddenly, the music stops: interrupted by the ringing of Apple’s ringtone “Opening.” This is an incredibly creative tactic, and something I have personally never heard in a song before. In all honesty, the first time I heard it I thought my own phone was ringing.

The phone ring followed by the lyrics, “Callin’ shawty callin’, why you call girl? / She can’t understand me she a fangirl.” Lil Peep then proceeds to sing about getting money and all the “bullshit” that comes with it.

Gab3 is featured on the track, rapping about jewelry and expensive clothes. The two recorded “Fangirl” along with “LA to London” and “Rockstarz” all in the same week in Spring 2017. However, due to the death of Lil Peep, it was not released until now.

The song switches up and fades out with no lyrics for the last 20 seconds. It keeps a strong bass, which is not uncommon for Lil Peep, but ending the song this way is pretty unique for him and a job well done.

Starting with an energetic melody, “PRINCESS” describes Lil Peep missing a girl who he refers to as his “Princess”. Unlike many of his songs, this track is written to a happier melody. It’s hard to know if this was due to Lil Peep himself, or the producer Cold Hart, as many of his songs were altered after his passing.

Personally, this song reminds me of the soundtrack to a cartoon or videogame at the begging, until the beat drops along with him starting to sing.

The lyrics, “Lonely sunsets without my Princess / Send me one text, so I can get some rest” contrasts the upbeat music in the background, a technique used in previous Lil Peep songs.

“How could I forget about you / I don’t know what I would do without you”  In the end, this is a love song to a girl he doesn’t want to be without.

walk away as the door slams – acoustic

This track is unlike a lot of the other work by Lil Peep. Where most of his music is accompanied by a beat electronic-sounding music, this song is acoustic. His voice is accompanied by the strums of an acoustic guitar, something you will never see in his previous songs or albums.

He sings about fighting with his girl in a nightclub, and how he wants to change that. She storms out, the door slamming behind her. This is all described fairly clearly in the first verse, but the chorus is more up for interpretation.

After the first chorus, the track features Lil Peep’s long-time friend, Lil Tracy. The two have made many songs together, including songs on this album, and I typically feel like they make good music together. However, I am not a fan of Lil Tracy’s verse in this song. He sings at a melody that doesn’t really seem to fit the rest of the music. Additionally, I feel like his lyrics are slightly off-topic and almost ruin the mood of the song.

“I know you wanna FaceTime, baby, I have Samsung / When I met your mom, she told me I was handsome / You told me I’m sexy, do you still think that? / You told me you loved me, do you still think that?” Lil Tracy sings in his verse. Not only does this not seem to fit with the song, but the lyrics also are simply not great. To be frank, it appears thrown together and unfinished.

Despite my personal dislike for the part of the song featuring Lil Tracy, I do like the song overall. The song ends with Lil Peep singing the chorus until the background music stops.

To conclude, this album was definitely unique in comparison to Lil Peep’s other works of art. It is always fascinating to me to see the work released by artists postmortem. He has all of these lyrics and songs that we, his fans, never knew about.

This album is something that can be appreciated for many years, especially considering it may be Lil Peep’s last. Though some songs were released before and re-released on this album, the overall sound was fresh and new. I would definitely recommend listening to this song when you have the chance.

Songs on this Album: