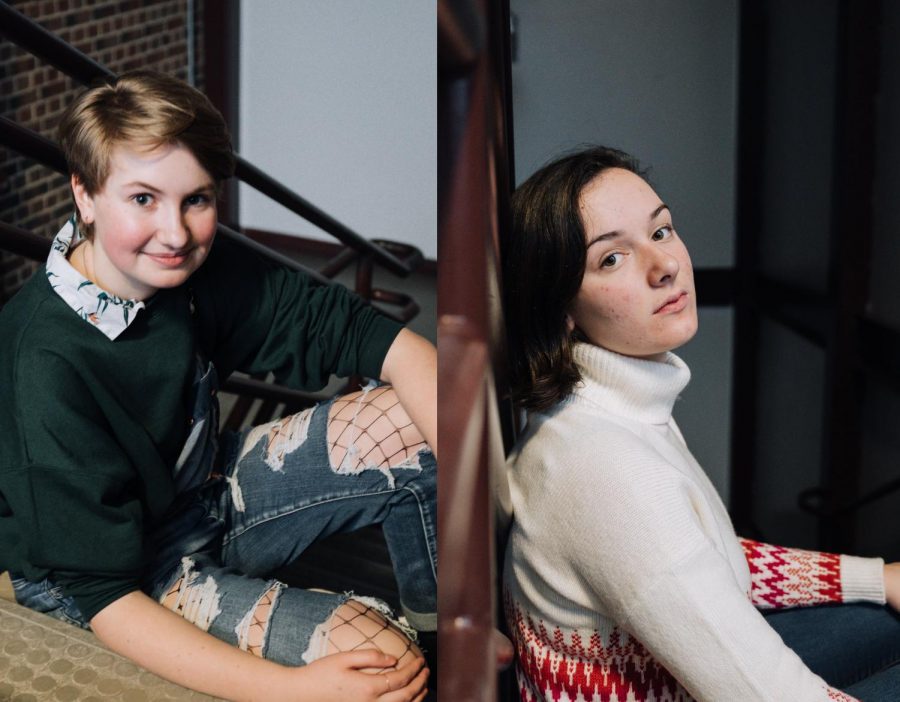 Junior Sage Iwashyna has gone through many changes in the past five years. In 2015, when Iwashyna was in 7th grade, he started to question his sexuality and gender. Since then, Iwashyna has changed his pronouns twice, from she/her to they/them during freshman year and then to he/his sophomore year.

Although it was a year of positive change, Iwashyna does not look fondly on his freshman year.

“I was so annoying,” Iwashyna said. “I was so obnoxious. People are like, ‘oh my god I hate freshman me,’ but freshman me was an actual disaster.”

Big personality changes did not come without hardship. He was dropped by three separate friend groups in just 8th grade but came into freshman year with “a solid group of friends.” Almost none of whom are current friends today. However, Iwashyna only has respect and love for all old friends.

“Friends come and go but I’m glad to have met a lot of the people that were in my life,” Iwashyna said.

Iwashyna entered CHS distrustful of authority figures, but he was surprised by the warmth of CHS teachers. Iwashyna has developed relationships with Quinn Strassel, Marcy McCormick, and most of all, Courtney Kiley. Kiley is Iwashyna’s forum leader as well as favorite teacher and has been a sympathetic listener to Iwashyna’s ramblings. Special relationships with teachers at CHS have helped Iwashyna get through tougher years.

“When I was in middle school, I was reading teen novels and they [the character] would have that teacher that they have this really special relationship with, and I was like, ‘oh I’m never gonna have that’, and now some of my teachers are my mentors and are just extremely valuable people in my life,” Iwashyna said.

Iwashyna joined CHS’ Queer Straight Alliance (QSA) freshman year, and he is now the president. The club helped teach Iwashyna how to be a queer activist.

Iwashyna views his periods of change, although hard, as extremely positive in the end.

Iwashyna tells students scared of both personal and social change to stick with it and know everything will work out. He says everyone will eventually find their people.

“I think that experiences should change a person and that high school is the time to change and figure out how to be the best version of yourself,” Iwashyna said.

During senior Molly Maloy’s time at CHS, she has expanded her interests while also growing as a person. In Maloy’s freshman year, she joined the Pioneer crew team.

“My mom was always trying to convince me to join lacrosse,” Maloy said. “And so she said, ‘Molly, I found the perfect sport for you.’ And I said, ‘Mom, for the last time, I’m not joining the lacrosse team’. And she said, ‘No, no, it’s crew. It’s a different sport.’”
She is now a team captain and has grown to become one of the best rowers on the team.

Becoming the best rower someone can be requires a tremendous time commitment and commitment to the team. One particularly significant memory in her rowing career was the winter of her freshman year.

“I just remember during finals week, one day, and there were only three people there,” Maloy said. “That’s the time I started to get a lot better. When I started rowing, I was not great. I was not in the A boat [the top boat on a team in a category]. I think those experiences where you pick up more skills, like on a day when there’s only three people there, you’re able to have more coaching and I think that really helps.”

Rowing and being part of a team has given her everyday skills, such as working hard to get to her goals.

“I think that putting yourself out there for experiences that you’re unsure about [is important],” Maloy said. Encouraged by this, Maloy went to her first Students for the Exploration and Development of Space (SEDS) club meeting her junior year. At first, she was unsure about joining because she didn’t know anyone in the club, but decided to stick with it. Now Maloy is a leader of the club and runs the SEDS Instagram page.

Maloy went to Slauson Middle School; when she was about 12 years old, the school required her to do some volunteer service hours. She went to a Youth Volunteer Corps camp to fulfill those hours and ended up falling in love with it.

Sophomore year, Maloy applied to the Youth Advisory Council and is still on the council as a senior. “We bring together a really diverse group of youth from all over Washtenaw County,” Maloy said. Currently, she is working with Chinese high school students in Ann Arbor to host a lantern festival.

“My favorite thing about it is making connections in the community that there’s no way I would have otherwise made,” Maloy said.

Throughout her years at CHS, Maloy’s experiences have challenged her to become the confident person and shape who she is today. “I was really shy when I came to Community and I didn’t have any friends who came here, but I have gained a lot of confidence and I am a lot more sure about myself and what I want to do in the world than I thought I would be when I was a freshman,” Maloy said.