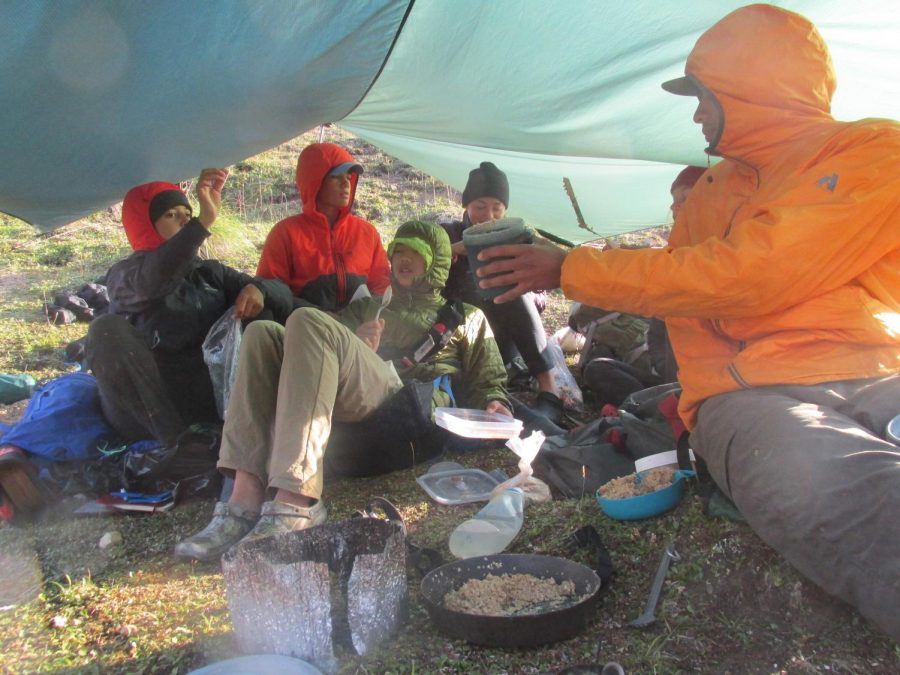 My course group enjoying oatmeal under a kitchen tarp in the Talkeetna Mountain Range in Alaska.

Peering tentatively over a Whisperlite stove into a simultaneously watery and burnt pot of mac-n-cheese, I realized I was not a natural born chef. This was the first of 30 nights in the Alaskan tundra on a National Outdoor Leadership School (NOLS) backpacking course, and I knew I had more to learn than how to set up a tent and stay positive on 8 hour hikes if I wanted to thrive.

Dripping in kerosene and shame, watching my coursemates grimace as they gulped down the mush, I asked a bold question: “Can I cook again tomorrow morning?”

Eyes bulged and jaws dropped. There was a long pause, but in the end the group decided to sacrifice their stomachs for a little extra sleep, and I was granted a second chance. It came in the form of oatmeal. To everyone’s surprise, the oats, topped with peanut butter, powdered milk and cinnamon, were perfectly average. And after the last night’s disaster, average was perfect.

With a smidge more credibility and a taste of moderate success, I set off on a cooking adventure. While friends napped and talked, I pored over the “NOLS Cookery:” 200 pages of recipes, tips, and tricks. An epicurious camper’s Bible.

One day, as I licked sticky dough off my fingers and waited for my (delicious) cinnamon rolls to rise, a friend caught me off guard with a simple question: “What do you like so much about cooking?”

I laughed, considering the stress of the job, I realized that it was not just the satisfaction of eating something that I worked hard to create, but the feeling of acceptance, the knowledge that my coursemates were approving of and thankful for something I worked hard to give them.

As the weeks went on, some friendships blossomed and others withered. Put a dozen 16-17 year olds together in the wilderness and social conventions quickly fall by the wayside. As we came to know each other, our disparate values came to light. At first this was exciting. At home, everyone was somewhat like me: born and raised in Ann Arbor, progressive, interested in learning about and “changing” the world (though generally through the confines of our own small, privileged community); we were a strikingly homogeneous group. I craved diversity of thought, and this was just the opportunity I’d been looking for. But eventually it became complicated and problematic. Insensitive jokes morphed into offensive comments and I began to feel increasingly uneasy. As my plea to abolish them and lists of reasons they made me uncomfortable were dismissed, I became unable to reconcile turning a blind-eye and began to remove myself from the group.

At first, I was angry. Not just because I’d never met, never mind been stuck with for 30 days straight, anyone with whom I was so diametrically opposed politically, but because I wanted so badly to be able to engage people with different world views. I imagined thoughtful political debate and an epic meeting of the minds. Instead I found myself pulling my hair out, and unable to meet anyone in the middle.

Late in the tent one night, considering whether it would be worth it to give up my position as chef to feed them something even worse than the first night’s mac-n-cheese (verbal or edible), I had something of an epiphany: my cooking was not political debate, but it was a demonstration of mutual respect. From my end, working to make something that would please the whole group; from theirs, being outwardly thankful and appreciative. Meals were common ground. Of course I wish we had been able to expand our minds and perceptions of the world through conversation and challenge, but there is no recipe book for how to get through to people who don’t want to engage. But our shared appreciation for mealtime, our shared appreciation for anything, was the next best thing. In order to achieve eventual productive discourse, we must achieve mutual respect.