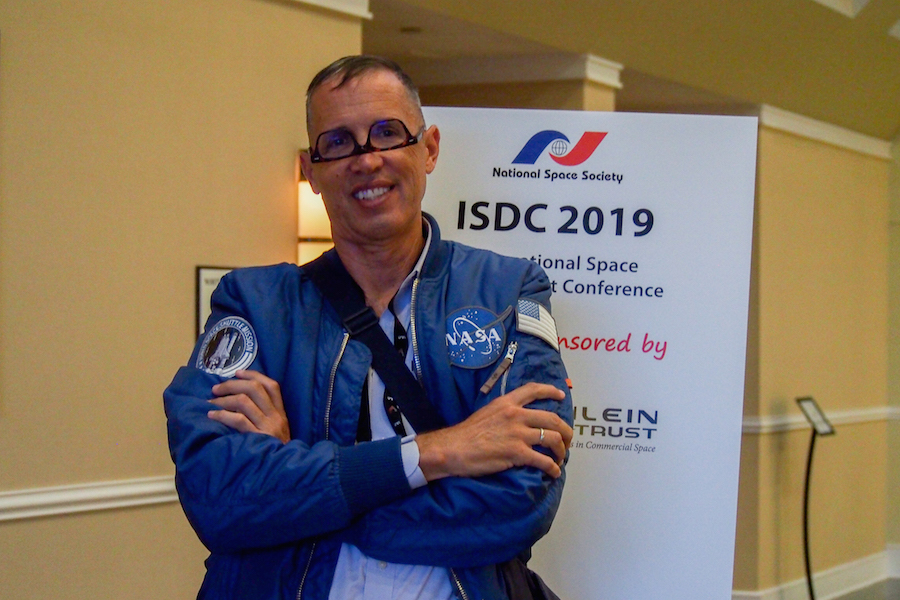 Mongo in his signature outfit at the annual International Space Development Conference run by the National Space Society. He finds that his upside down glasses easily catch the attention of the students he works with.

Space has fascinated Mike Mongo since he was five years old, sparking a deep sense of curiosity that he has never relinquished.

Initially, Mongo planned to act on his passion for space by becoming an astronaut. Unfortunately, that aspiration hit a stone wall in the face of NASA’s daunting requirements. To even submit an application to be an astronaut, your resume must include either years of related professional work or thousands of hours of flight training. Should your application reach the finalist stage, you must then pass further tests and interviews; and those few who are selected will not become true astronauts until after a “training and evaluation period” of around two years.

All this assumes NASA is even accepting applicants. As of today, they are not, according to their website.

So in 2008, when Mongo — who worked in marine sciences and computer technology — was 42 years old, he concluded there was no longer a path for him to be an astronaut.

Instead, he decided to spend the next half of his life inspiring others to become astronauts.

“I began working with students in all different capacities, making myself available to schools and teachers to talk on astronautics [the science of space travel] and space,” Mongo said. “I give students permission to imagine themselves living, working and playing in space.”

He began visiting various conferences to meet space professionals, and gradually became the go-to person for anything that had to do with students in space. His profile snowballed, particularly with the publication of his book “The Astronaut Instruction Manual.”

“It was like an overnight success that was 10 years in the making,” Mongo said.

The book is an illustration-filled handbook for pre-teens that mixes scientific facts and information with life skills useful to the prospective astronaut and features on inspirational scientists and other space-related figures. Short and accessible, it encourages middle schoolers to imagine what the next generation of space travel will be like.

Space has allowed Mongo to be optimistic about the future of humanity. He believes that when humankind expands into the stars, space holds the potential of improving the human condition through its almost limitless resources. Asteroids could be mined for metals like iron and nickel; water drained from the moon; hydrogen drawn from gas giants like Jupiter.

While Mongo believes getting into space continues to be the main challenge for accessing resources, he also believes that it can only become easier. He points to the example of flat screen TVs, which have fallen from thousands of dollars in price to a mere hundred.

But before that can happen, space settlement requires people to work towards it. Every so often, Mongo occasionally meets a truly extraordinary student through his interactions. Mongo remembers one moment in particular. When he was answering questions at the International Space Development Conference, a 9-year-old — small for her age — was the last one waiting.

“She says with an honesty that went right to my heart and soul, ‘Why did you become an astronaut teacher?’ Mongo said. “Because the reason I became an astronaut teacher? Because there wasn’t someone there for me to encourage me to pursue space and astronautics and give me permission to imagine living, working and playing in space. ‘When I was you,’ I said to her, ‘I didn’t have a ‘me’, so I became ‘me’ for you.’”