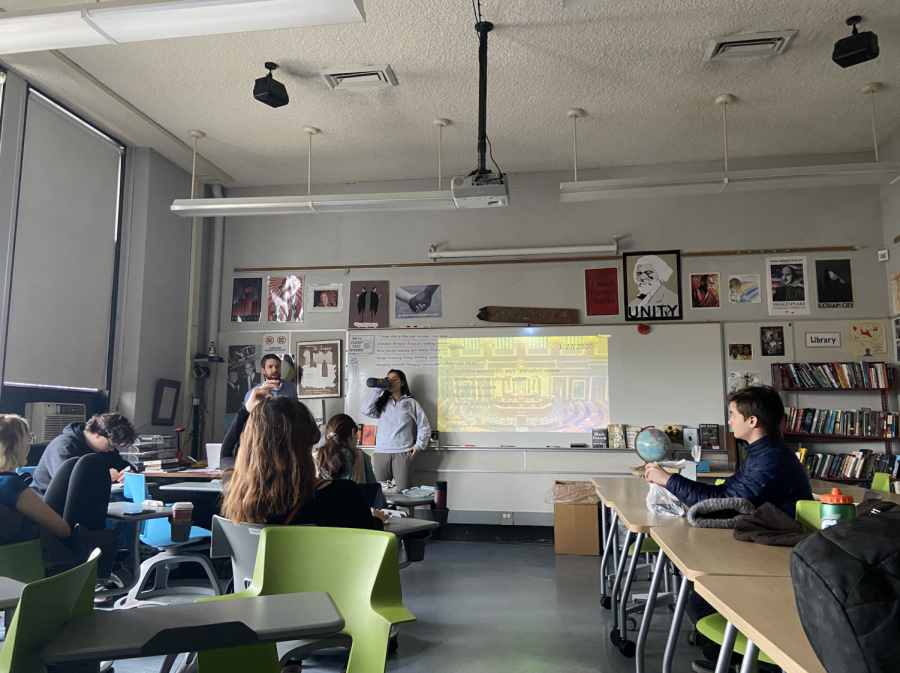 The greater part of January was dedicated to organizing middle school meetings. The outreach is a major part of how CHS informed potential middle schoolers and their parents about CHS. Since CHS is not one of the big three Ann Arbor Public Schools — consisting of Skyline, Huron and Pioneer — the effort is uniquely important to ensure student diversity.

Despite the vitality of middle school meetings in CHS’s effort to raise awareness about the school, Ann Arbor Public Schools cancelled the meetings. Given the abrupt change, the middle school outreach sub-committee along with counselors Amy McLoughlin and Brian Williams managed to rearrange shortened, 20-minute sessions at Ann Arbor middle schools.

“The district decided to cancel them since the big three schools didn’t really use or need them,” said Matt Johnson, Forum Council leader and CHS english teacher. “That’s something that we did a little bit of work on. But next year, since they shook it up, that’s going to be a big part of what we’re going to do. Hopefully we can reimagine our approach to student outreach and getting Community out there.”

Additionally, FoCo representatives worked on Janitor Awareness Week where they hope to recognize and appreciate the janitorial crew at CHS. Earlier in the month, members went back to their forums to discuss a celebration of the custodial staff at the school. Forum Council hoped to spur an overarching effort to further improve relationships and inclusion between janitors, staff and students at CHS. All of the ideas mentioned during FoCo for Janitor Awareness Week were approved.

“The official American Custodian Appreciation Week is in the fall, but we were just thinking that we have largely new custodians, and some of them have been here for a little while and we also have some new janitors,” Johnson said. “They only have a two person rotation so it will be just a really nice time of year to show appreciation. We don’t have a set date for it. But hopefully soon, hopefully sometime in February.”

The last two projects covered in January were Comstock, a music festival hosted at CHS, and additional outsourced programs. Comstock will now be the primary focus of Forum Council until it is held on May 1st.

One of the potential outsourced programs that was discussed was a group who looks at solving student parking issues at CHS. The second idea was, evaluating Multi-Culti this spring to better define the purpose and detail a more structured approach to the day. Finally, tailoring the middle school outreach to the new shortened standard.

“Just freshen [the middle school outreach approach] up, and have a streamlined, redesigned resources,” said Brian Williams, CHS counselor. “We have been thinking about how we can get [CHS students] involved in that too. We have been thinking about making a CR and take a semester to realize this; we would work on recreating the video and some logos and format for the handouts.”