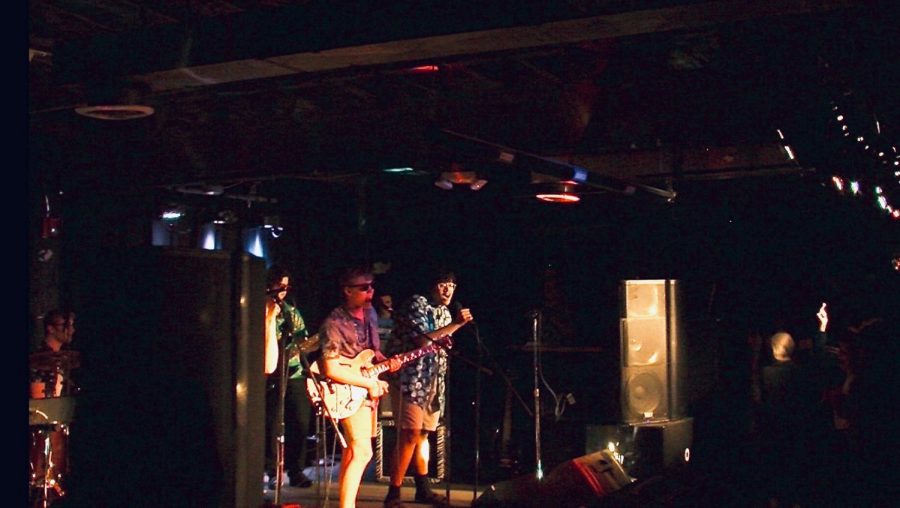 The Focus Group performed at the Battle of the Bands on Friday, Jan. 31, 2020. Drummer, Jack DeBona recently found an interest in writing his own music, and his band performed one of his originals. "I play along with different songs," DeBona said. "I’ve tried to model songs that I have written after songs that I like."

The Focus Group performed at the Battle of the Bands on Friday, Jan. 31, 2020. Drummer Jack DeBona recently found an interest in writing his own music, and his band performed one of his originals.

“I play along with different songs,” DeBona said. “I’ve tried to model songs that I have written after songs that I like.”

Jack DeBona, a high school senior and drummer, found a passion for music six years ago. At 17, DeBona is an experienced drummer and sacrifices a lot of his free time listening and practicing.  His inspiration for drumming and playing songs comes from the songs he listens to.

Led Zeppelin is DeBona’s favorite band and drummer John Bonham is one of his biggest influences. Recently DeBona decided to put together a band for Battle of the Bands, a high school band competition in Ann Arbor, Mich. When contemplating a name for their band, DeBona and his group members singled out a few contenders. His friends Aidan McCoy and Earl Bey helped him come up with a name for their band. “My friend Aidan suggested we separate a few names for our focus group and then I thought, hey that’s a really good name, ‘The Focus Group,’” DeBona said.

His band was tasked with writing two original songs to perform in the competition.

“I’d never written a song before so I listened to other people’s songs which inspired me to write  similar songs,” DeBona said.

DeBona’s favorite song by Bonham is “Fool in the Rain” which guided his song writing ideas for the competition.

DeBona hadn’t played rock or funk music before rehearsing with his band. The Focus Group met six or seven times prior to the Battle of the Bands. His band performed the songs “Kiss” by Prince, “Surfin’ USA” by The Beach Boys, and an original called “The Juul Song.”

The competition made it hard to win. Unfortunately, The Focus Group did not advance past the first round of the competition.

“It was a learning experience and a lot fun,” Debona said.

DeBona enjoys taking classes and playing in the CHS jazz program. He spends a lot of time practicing and learning. Currently he is focused on improving his music theory, in particular scales, and chords. Josh Moss a CHS jazz band member and close friend of DeBona has also been practicing music theory.

“[Music theory] has different subdivisions, the same way you have to combine certain elements of math to solve an equation, It uses different aspects to create [music],” Moss said. “Music theory is used by more experienced musicians.

The experience of playing music will definitely be a part of DeBona’s life.

“So far my musical career has been successful because it’s my favorite thing to do, play and listen to music,” DeBona said. “I’m not planning on going to music school, but I am planning on staying involved in music, and I’d like to write more songs.”