Listening session held in Saline due to tense racial climate 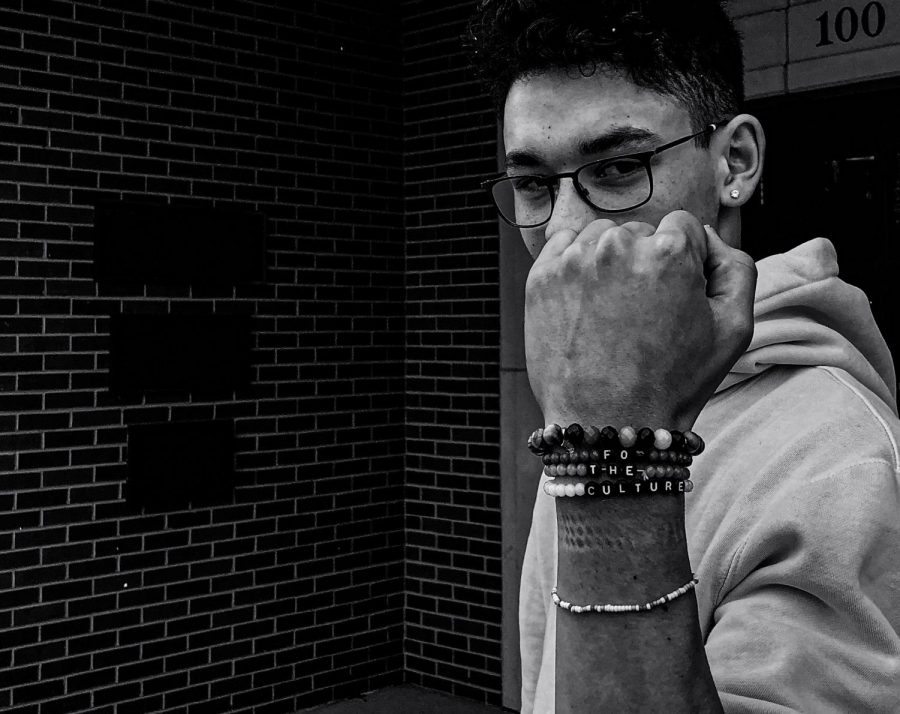 Saline High School junior Dru Campbell stands in front of Saline City Hall. As the only high school student to attend the listening session on Feb. 9, he proudly displays his "For the culture" bracelets. "I get looks for [my bracelets and clothing] because I think once you celebrate your culture in Saline, they tokenize you in a sort of way," Campbell said.

Due to the tense racial climate deriving from exposure of a Snapchat group chat created by certain white Saline High School students in which they said racial slurs, community members came to share their experiences. The forum was also a response to a previous session held at Liberty School on Feb 3. where parents of students at Saline Public Schools came to support the victims of the group chat. At this initial meeting, local business owner Adrian Iraola was interrupted by a man behind him while he was sharing the experiences of what his children had endured in the Saline Schools. The man behind him, Tom Burtell, commented, “Why didn’t you stay in Mexico?” The encounter was captured on video by MLive, eventually receiving global coverage.

The three proctors of the Feb. 9 listening session emphasized that the conversations occurring in the room were not easy. They laid out ground rules for the meeting: in hopes to facilitate reflection, listening and understanding, community members were asked to speak on behalf of themselves––not the entire group. They were urged not to criticize what others were saying and speak up if they felt the conversation was going off topic.

In the five minutes people were given to speak, community members shared the experiences of their children or family members. Aramide Piuheivo-Boatswain, an African American resident with current children in Saline Schools, spoke up.

“I never felt the need to be black,” Piuheivo-Boatswain said. “I never felt the need to explain why I think the way I do or what I expect. My husband and I appreciate that people recognize that this is an issue now. I’m frustrated that it took a Snapchat conversation for people to understand that this has been going on since my kid was in kindergarten. To say that this is something that I didn’t know existed in Saline hurts because when my kid started kindergarten, I told him to be careful about the white boy that might talk to you a certain way. Don’t get mad, and don’t hit him because I don’t want you to get suspended.”

She also pointed out that she didn’t know many people in the room and that few audience members looked similar to her. Other community members talked about the lack of diversity in Saline and highlighted previous concerns from family or friends advising them not to move to the small, predominately white city.

“I’m a teacher in Ann Arbor, and I’m here,” said John Fisher, a wrestling coach and teacher in the Ann Arbor Public Schools. “It didn’t happen in my school, and I’m here. It’s sad to see that black and brown skinned students have to tolerate stuff like this. My son, he went to Ann Arbor schools and now he’s in DePaul College and is doing well. I’m so happy that he didn’t have to experience that.”

The city of Saline continues its process of restorative justice to move forward after the Snapchat group chat incident, as well as other encounters of racism that may have been swept under the rug in the past.