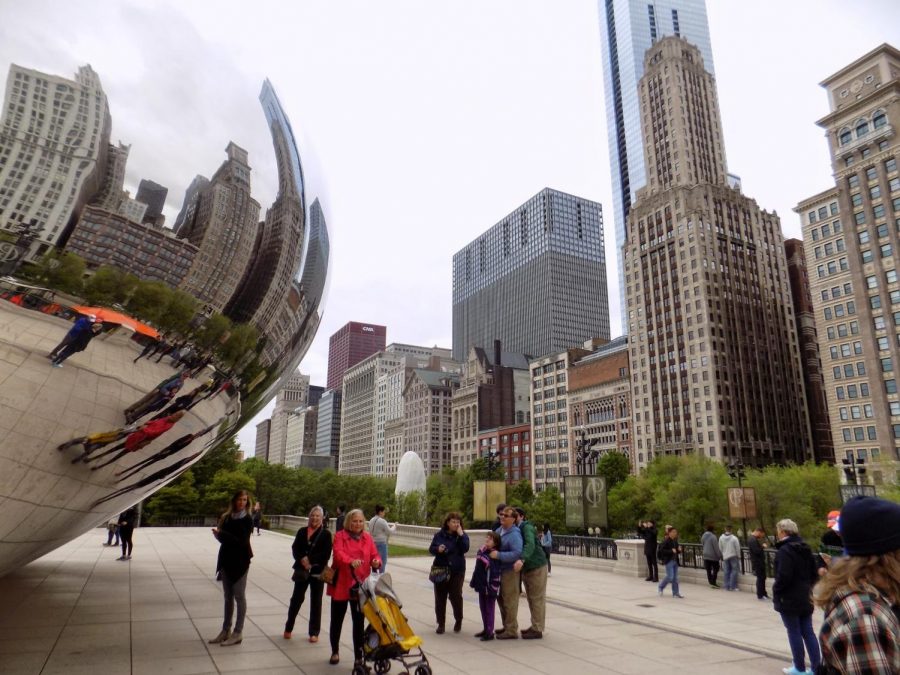 A view of Michigan Avenue from the Bean in downtown Chicago. The Palmer House Hilton hotel, where the Unifieds conference was held, was just a few blocks away from here.

The L train rumbled past my window at 5:30 a.m. and I jolted awake. My hotel room was dark, illuminated only by the neon lights from across the street, advertising a jewelry store. Outside, the day was already beginning; people were slowly emerging from their apartments and hotel rooms and making their way through the snowy streets of downtown Chicago.

Two hours later, I stood at the door of my hotel room in my red sweater and black pants. I clutched my tote bag, packed with 12 copies of my headshot, a water bottle and an extra pair of shoes. My mom and I walked out of our hotel and onto the sidewalk, joining the hustle and bustle of a Thursday morning in the city. We only had to walk one block before we reached our destination: The Palmer House Hilton Hotel.

The marquee was lit up with what looked like a million light bulbs. Its golden doors glistened in the morning sun. Around me, people rushed into the hotel, but for a short second, I stood there, looking up at the hotel with snowfall clouding my vision, and I took a deep breath: I’d been waiting for this moment for three years. Today was audition day.

I walked into the hotel, my brain buzzing with excitement: I knew the times and locations of my six auditions by heart; I made plans to meet up with my long distance friends; and I had five monologues and three songs ready to go at a moment’s notice. This was Unifieds — the annual conference for collegiate theatre auditions, attended by thousands of people from around the globe — and there was no time to waste.

I made my way to the seventh floor. Already, the hallways were full: students chatted with one another, stretched on the ground and jogged through the crowd to get to their next audition. Banners and flyers for different colleges decorated the walls and tables. In the bathrooms, people sang scales and belted out riffs.

After maneuvering through the crowds and talking to a couple friends, I found the room for my first audition. I checked in with the woman sitting at the table in front of the door and handed her a copy of my headshot and résumé.

I turned around to face the hallway. In front of me, hundreds of my peers paced, rubbed their faces and sat against the wall with their eyes closed. On the floors above and below me, thousands of other students sang and performed monologues for collegiate representatives, all of whom were looking for a maximum of 20-30 students for their programs; it was all a game, and most people would lose.

And so when the woman called my name to let me know that it was my turn in the audition room, I knew that it wasn’t three years ago anymore. In that moment, I remembered the years of hard work it took me to believe in myself as a performer enough to give college auditions a shot. And so I turned around, flashed my brightest smile, and walked into the audition room without a shred of doubt in my mind. I had nothing to lose, and I wasn’t scared anymore.