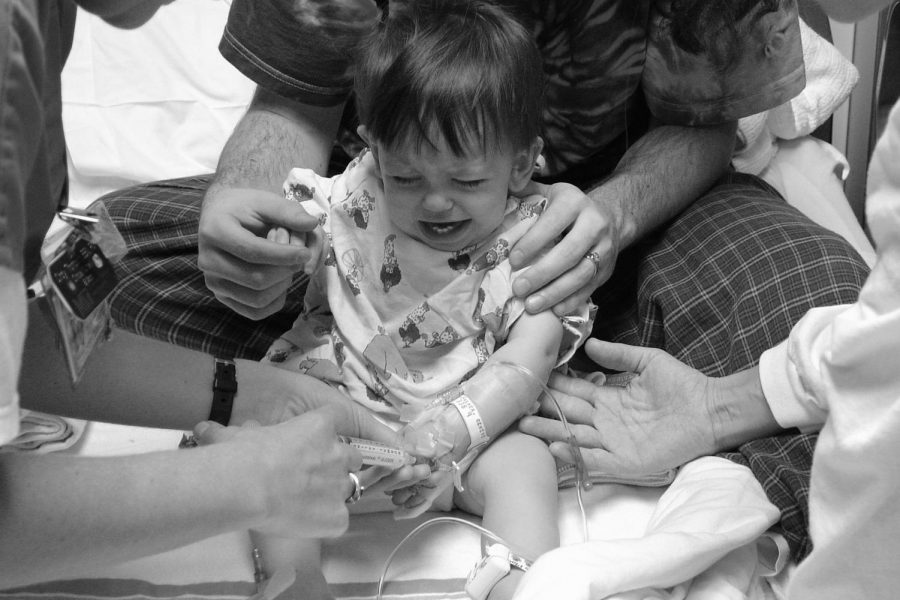 Me, at 11 months old, receiving pain medication after spinal surgery.

I experienced the worst pain I’d ever felt in August of 2019 when I was a first-year counselor at Camp Al-Gon-Quian and was walking back to my cabin after washing dishes. I limped all the way from the dining hall to Cabin 13 across the grass field, collapsing into a pile of clothes my messy campers had left on the ground. That was the most I’d ever cried.

As a younger counselor, I was only at camp for two weeks that summer, but somehow, the work still managed to destroy me. My coworkers and I spent hours every day dishing, smaller campers would climb over me during free time and there was little time for the physical therapy I’d been doing regularly at home.

I’d say the work was back-breaking, but that ship had sailed long ago.

Freshman year, I began visiting my neurological surgeon, Dr. Muraszko, relatively regularly for pain in my lower back that came suddenly at a summer program in Pennsylvania and had remained ever since. She had me walk back and forth in a straight line, balance on one foot, touch my toes, all typical tests I’ve performed for her for as long as I can remember.

But this visit wasn’t typical — it was life altering.

As I sat on the thin tissue paper draped across the exam table, Dr. Muraszko picked up an x-ray from the counter and pointed to a spot just above my tailbone.

“Do you see this bone here?” she said. “It looks like you have an extra lumbar, but it’s actually supposed to be one bone; this bone has been split in two.”

My infant life was spent acquiring various diagnoses. The most obvious was identified by my father directly after my birth: an extra thumb on my right hand. When he told my mother her response was “Jon, that’s not a funny joke.” After that came the scoliosis; the muscles on the side of one neck that were shorter than the other; the one kidney instead of two; the holes in my heart, which closed on their own; and the ball of nerves in my spinal cord that were tethered to my spine. My extra thumb had to be removed, as it was stunting the growth of the other thumb on that hand and I had surgery to untether the nerves in my spine. So, ever since I was a baby, my body has been scarred from procedures I did not choose and do not remember.

Growing up, my medical issues seemed a closed case; my body functioned about as well as any of my peers’ and, until freshman year, I never encountered any new issues. This diagnosis was the first I could remember.

The pain in my lower back is still omnipresent and, though I’ve been through hours of physical therapy, it has become clear that this pain will never leave and will never decrease. Dr. Muraszko told me that the bone formed that way out of sheer misfortune: there was nothing that could have been done to prevent it, and, now that it’s happened, it is likely that it will continue to grow worse and worse, especially if I aggravate my back.

That time at camp was not the first I’d had back pain, but it was the first time I understood it, and that, somehow, made it worse.

After picking myself up off the ground, I forced myself into a shower stall.

I’d spent years as a camper imagining what it would be like being a counselor. Like most campers, I admired the counselors and I aspired to have their excitement at seemingly small things; to get up on table-tops, stomping and clapping in rhythm; to harness that hopeful energy they seemed to bring with them everywhere.

Now that I was here, the place I’d always longed to be, I felt stuck and stagnant.

Alone in the bathroom while campers socialized at their activity hours, I sobbed for what I had lost: the ability to move through the world how I used to — to run and jump and play.

I felt hopeless. No, more than that: I felt afraid.

This back pain had started suddenly, shooting up from where my feet touched the ground to just above my hips. Occasionally, after washing dishes or staying on my feet too long, the ache would be heightened for a few hours, days sometimes; each time, I worried it would stay that way. Sometimes, I wondered if it didn’t actually go away, but rather, I just got used to it being there. In those times, when my pain is worse than usual, I’m often suggested pain medication. My pain is supposed to get worse as time passes, so if I start self-medicating now, even with over-the-counter ibuprofen, I’ll likely just need more of it as I start to feel worse, and possibly become addicted.

The worst fear, however, is this: that I’ll get to a point where my pain will be so great, I will no longer wish to continue living.

That was the main thing that kept those tears streaming down my eyes in the shower at Camp Al-Gon-Quian: I was going to miss wanting to live. Which is, I think, the reason I’m writing this — because pain, in any form it takes, can serve as a reminder of joy and elation and wonder and all of the good things in life.

Not only can pain show us how lucky we are, but it can show us how strong we are. Being disabled, I’ve had to learn to advocate for myself and learn about my body and how much I can take.

Pain showed me how to be the person I want to be, how to be like those counselors I so admired: not only were they enthusiastic, but they seemed to be confident and in charge of themselves. They knew who they were and what they wanted and they weren’t afraid to show it.

To prevent my pain from getting worse and controlling more of my life, being like those counselors wasn’t a choice for me — it was a necessity. I had to express to the people around me and the people in charge of me when something was going to hurt me and how they could best accommodate me. Pain made me in charge of my own life, and, therefore, as well as making my life worse — in some strange, broken way — ended up making my life more complete.