Pioneer BSU takes complaints to the AAPS School Board 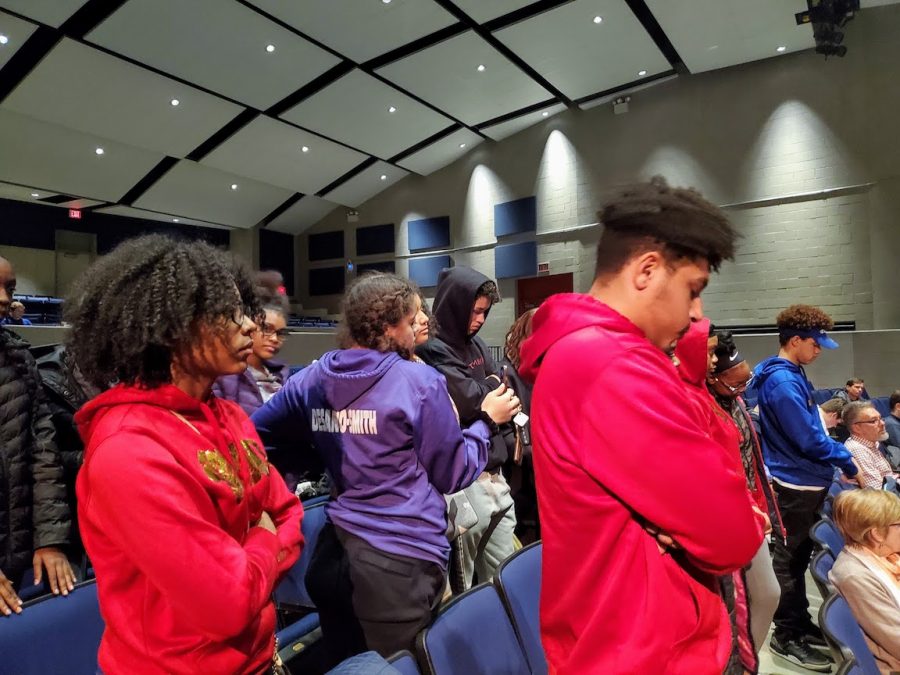 Stories of racism in public schools have become increasingly prominent in local headlines, with an MLive story on racism in the Saline High School community achieving international coverage. According to black students at Pioneer High School, racism is not limited to Saline. At the AAPS Board Meeting on Wednesday, Feb. 19, allegations made in December were taken to a higher authority.

Pioneer Black Student Union (PBSU) spoke during the public commentary section of the meeting, calling for action on a Dec. 18 altercation between a white teacher and a black student.

“On December 18, upon returning from a school field trip, a fellow peer went to her… teacher… to get an assignment that was passed out that day during the class she had missed,” said representatives from PBSU. “After the teacher continuously refused to give her the work, the student decided to take the assignment herself, since it was on the top of the teacher’s desk. The teacher then chased the student down on her way leaving with the assignment, then forcefully grabbed her students shoulder, pulling her backwards. After a look of mutual shock, the teacher told her student, ‘I’m going to tell the principal you attacked me,’ even though the student did not touch the teacher. The incident took place in front of the teacher’s whole third hour class.”

The teacher in question was placed on administrative leave during winter break while an investigation was being conducted. This involved her being absent during finals in January, contributing to a growing shortage of teachers at Pioneer in her department. After she had returned, Pioneer’s school newspaper, The Pioneer Optimist, published an article on the teacher shortage, mentioning the teacher’s absence and how students were “overjoyed” at her return. It also quoted an email the teacher had sent out to her students before she returned, in which she discredited the allegations against her and expressed her frustration at the situation.

The student involved had not been notified about the teacher’s return, and the safety plan given to the student was to stay off the floor the teacher teaches on, where many of Pioneer’s mandatory core classes are held.

PBSU organized a petition to remove the teacher in response to the teachers’ return, the Optimist article and the administration’s response. The petition, as of publication, has over 500 signatures.

“She once put my grades on the projector then started calling me D- and not by my name,” said one anonymous commenter, alleging the teacher violated federal law.

“When I was her student she asked me in front of the class ‘Where’s your father?’ another comment said. “I am African American. She also spoke to me as if I was incompetent, and was very rude and never really tried to help or work with myself or the other African American students in my class.” Saline students got involved too, adding their support to the petition.

“This is a community wide issue that is only just beginning to surface once again,” the Society of Student Resistance Saline High School responded. “We support Pioneer and all other neighboring schools as we fight for justice in the institutionalized oppression. Wishing you the best.” Saline students representing this group were in attendance at the Board Meeting as a gesture of solidarity.

Other comments defended the teacher, testifying to her character and ability as a teacher.

“She’s hard on her students because she cares about them,” one anonymous commenter said.

“She would never swear, use derogatory remarks, or abuse anyone,” another anonymous commenter said.

“This incident is just one of many deep, degrading and problematic situations the black students and other students of color face at Pioneer High School,” the speakers said. “In addition, this incident is just one of the many problematic acts the teacher has made towards her students. Speaking to any group of Pioneer students, it would not be uncommon for multiple stories of the teacher saying homophobic, racist, or ableist comments. Students do not feel safe with someone of this character being on staff.” Their statement urged the board to take action beyond what the Pioneer administration had done.

“We hear you and we are working on it,” said Board Trustee Susan Baskett. Trustee Baskett and Trustee Bryan Johnson, the two black representatives on the board, thanked the students for their bravery in speaking out and assured them that behind-the-scenes work was being done to ensure the safety of students. The four non-black trustees remained silent.

After the meeting, students from the BSU gave interviews to reporters on the scene and participated in a meeting with the University of Michigan’s Civil Rights Initiative lawyers on possible further steps.