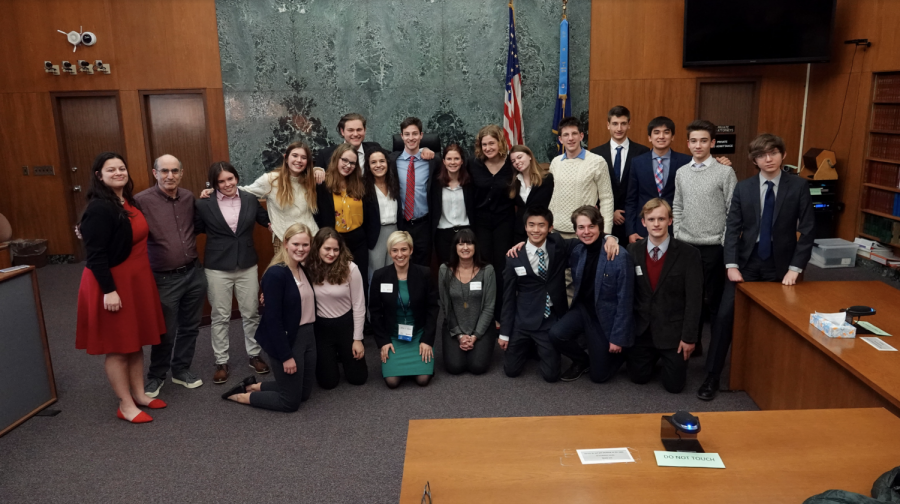 On Feb. 22, 2020, head coach and CHS teacher, Chloe Root alongside the rest of the CHS mock trial team were exhausted. A long day of competition had finally come to an end, and all coach Root could do was wait. Her anxiety rose exponentially until the announcement came: both the CHS A-Team and B-Team were advancing to the State Finals. Out of the 13 schools at regionals, the scoring judges decided that both CHS teams deserved to move on.

CHS team members and coaches emphatically celebrated as they claimed their regional trophy from the Director of High School Mock Trial in Michigan: James Liggins. The countless hours of preparation and memorization had paid off, as both teams struggled to contain their emotion.

“I’ve just been walking down the halls beaming because I’m just so proud and happy,”  Root said. “It feels good because I’ve seen all the work that both teams put in. I feel like it’s really rare in life that you feel the people get their due for their hard work, but both of Community’s teams were rewarded for theirs and it still feels so good.”

It is rare that two teams from one school advance through regionals, due to the number of strong teams competing. Because of this, B-Team lawyer Cree Perample was pleasantly surprised by his team’s regional victory.

“Going into the day I honestly did not believe B-Team would advance,”  Perample said. “When I heard the announcement I was super happy. It showed me that the time we spend here is worth it, and that hard work can really pay off.”

While the excitement still has yet to fade for coach Root, she has quickly turned her attention to the State Finals —which are less than a month away. The day after the regional competition, Root began her preparation for states, already planning the trip to Kalamazoo for the competition on March 21.

“I’m hoping that both teams can grasp the ‘rules of evidence’ a little better and make sure we don’t become robotic come competition time,” Root said.

In terms of a student’s perspective on the upcoming state competition, this year will be many B-team members’ first trip to the State Finals, including Perample. As a senior who has been a part of the team for the past three years, Perample is hoping to end his Mock Trial career on a high note, winning the state championship.

“If B-team goes into the competition with the same confidence we had at regionals, there is not a team in the country we should be afraid of,”  Perample said. “We’ve already made it this far, so we’re going to embrace the challenge and competition that states has to offer.”

However, with the success comes added pressure for the team, as the level of competition is much higher at the State Finals. This year is the first time in Roots coaching career that the State Finals has been held in Kalamazoo and the nerves of an unfamiliar environment daunts coach Root.

The Washtenaw Regional Competition was held at the Washtenaw County Courthouse, which is a short walk from CHS. The State Finals, however, will be held in “enemy territory” according to coach Root, as Kalamazoo High School is the reigning state champion and the arch-rival of CHS.

Despite the stakes, Root has the same mindset toward States as she did Regionals: to work harder and smarter than any other school in order to have the greatest chance of success.

Regardless of the result on March 23, coach Root is proud of the commitment and teamwork both teams have shown this year. Winning the State Finals isn’t the driving force that causes coach Root to continually support the program, and eyeing the trophy cannot even compare to all that the students have learned this year.

Coach Root is content with the fact that her team will be able to look back at Mock Trial knowing that it has taught them so many life skills and lessons that are difficult to teach in the typical classroom.

Perample has a similar mindset for states as Root, as he is trying to not worry about what the result of the State Finals may hold. Perample and the rest of his team are simply focused on improving and perfecting their case before the competition to give themselves the best chance of success.

“The fact that the B-team is even there is a success, but we do not plan to settle,” Perample said. “We are going to strive to be the best we can so that we can look back at it and know that each person did everything they could to be successful. We are going to stay focused and keep working and not worry about the result of a competition we haven’t even competed in yet.”