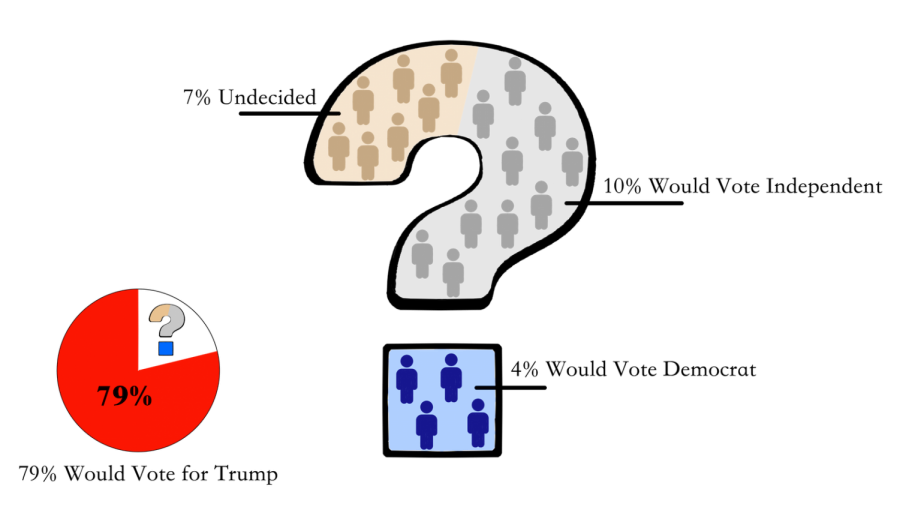 Donald Trump was never supposed to be president.

Most pollsters expected him to lose, albeit narrowly, to Hillary Clinton. In fact, Trump was never even supposed to make it to the general election. Republican party leadership planned for his candidacy to die in their primary.

The Republican establishment all hated him, for a myriad of reasons. The overarching problem these so-called ‘party elites’ had with Trump, however, was his defiance of the establishment and traditional Republican platforms.

“He rejected a lot of the key issues the Republicans had stopped talking about because everyone’s on the same page —  aggressive foreign policy, leadership in NATO and other military alliances, free trade,” Robert Mickey, University of Michigan Political Science Professor, said.

With the leadership against him, Trump’s campaign should have disappeared before it built up steam. But something went awry.

“[Trump’s] nomination pointed to how weak American parties are,” Mickey said. “Here’s a guy who the backers of all the other candidates hated, but they failed to coordinate behind any of the other not Trump candidates. All they had to do is get behind one of them, and that one person would have gotten the nomination… [But they waited] too long so that it was too late.”

Even after his nomination, many within the party still opposed him. The Harvard Republicans club, the oldest College Republicans chapter in the nation, refused to endorse him. Primary opponent Jeb Bush refused to pledge support. Party elites had worried meetings and phone calls. The night of the Access Hollywood tape release, there was quiet panic within the party.

“That night Paul Ryan, the Speaker of the House, is on the phone with people and they’re deciding whether to take Trump’s name off of the ballot,” Mickey said. “Legally, it was too hard for them to go state by state because that’s who decides who’s on the ballot. But they had real talks about abandoning their own presidential candidate.  Another sign that the party elites thought he was gonna lose, but also just despise the guy.”

Despite the low expectations, we all know what happened. Although he lost the popular vote by almost 3 million votes, Trump won the Electoral College and therefore the presidency.

“We were shocked,” Mickey said. “Everyone was shocked; he was shocked. I remember at eight o’clock of election night, his staff were on different cable channels, blaming each other for why he lost. So for everyone, it was a surprise.”

Since then, most congressional Republicans have fallen in line. Most do not support Trump now because their views of him have changed, however. They do it out of fear.

“They’re scared of their own primary voters,” Mickey said. “They’re scared of the red hat and MAGA [Make America Great Again] people. Even if they’re in a safe congressional district that’s always going to elect a Republican, they’re scared that they won’t survive a primary against Trump. So they keep their mouth shut.”

But even as some vocal critics were quelled and efforts to block Trump’s election faded away after 2016, a sizeable percentage of the Republican Party still refused to fall in line. This is not the 42-58 percent of the GOP Greenberg Research finds to be ‘less enthusiastic’ about Trump’s presidency, and it is not the conservatives who dislike Trump as a person but vote for him anyways. These are GOP voters who dislike Trump to such an extent that they have defected from the Republican party and do not plan to vote for him in the upcoming election.

“So different kinds of people [are] outraged about different things about Trump,” Mickey said. “[There is] the DC set who was outraged by Trump’s kind of isolationism, rejection of NATO, wanting to pull out of world diplomacy. There are other people who reject Trump’s white nationalism and racism.”

Amy Chan is one such voter. A registered Republican for most of her life, she nonetheless voted for Clinton in the last election, abhorring the idea of a Trump presidency.

“Frankly, I felt like [Trump] was an illiterate thug who was playing to these racist tendencies that are the worst impulses in our populace,” Chan, former Arizona State Elections supervisor, said. “I also did not like the Clintons, I respected them but I didn’t care for them. But I decided a vote for the libertarian or the green candidate would be a vote for Trump, and I decided to swallow my dislike of Hillary and get behind her and vote for her.”

Voters like Chan may be a minority, but they are not an insignificant one. According to Gallup, there was a 5-point drop in the number of people who call themselves Republicans after the 2016 election. A Greenberg Research study shows that 10 percent of traditionally GOP voters plan to vote third party in the 2020 election if the Republican nominee is Donald Trump. This is in addition to a further 4 percent who dislike him enough they would actually vote Democratic. If you add in people not ready to vote against him and would rather just sit out, only about 79 percent of the normal GOP base is prepared to vote for Trump in 2020.

This means there are now millions of usually Republican voters faced with an important choice: If they are not prepared to vote for Trump, what are their options come November 2020?

There are really only three: Voting for a third party, voting for the Democratic candidate or just not voting at all. According to Mickey, which possibility most defectors pick may depend on the Democratic nominee.

“So if Biden were the nomination, I think the majority [of anti-Trump Republicans] would vote for him,” Mickey said. “He’s a dude and sexism is an important force in elections, and he’s seen as much more conservative than Elizabeth Warren. If Warren is the nominee, I think some of them would swear they’re not going to do it but on election day give up and vote for Trump again. Some of them will just be disgusted and say politics disgusts me.”

Chan, however, doesn’t particularly care who the Democratic nomination is. It’s already enough that they’re not Trump.

“I will vote for the Democratic candidate in a heartbeat if Trump is on the ballot again,” Chan said. “I mean, there’s just no choice there.”

What these dissatisfied Republicans choose on election day will certainly matter. In 2016, three close states won Trump the presidency: Pennsylvania, Wisconsin, and Michigan. Trump won by a total of only 70,000 votes across the three states. Even a small push would be enough to flip those states, and there are certainly enough anti-Trump, formerly GOP voters to provide that push.

Beyond 2020 and Trump, the fate of this Republican subcategory is unknown. Mickey believes most will eventually return to the GOP.

“I would imagine that most of those [dissatisfied Republicans] aren’t permanently not Republican,” Mickey said. “I would guess that as soon as the Republican Party nominates even someone like Mike Pence, they’ll kind of go back home.”

Personally, though, Chan is considering moving on.

“You know, I wonder if too much damage has been done,” Chan said. “In our state, for a long time there’s been a lot of people leaving both the Democratic and the Republican Parties and just becoming Independent. So even before Trump I wondered whether we would be seeing some sort of a change with the parties coming. But I really do think that this might be some damage that is kind of undoable.”