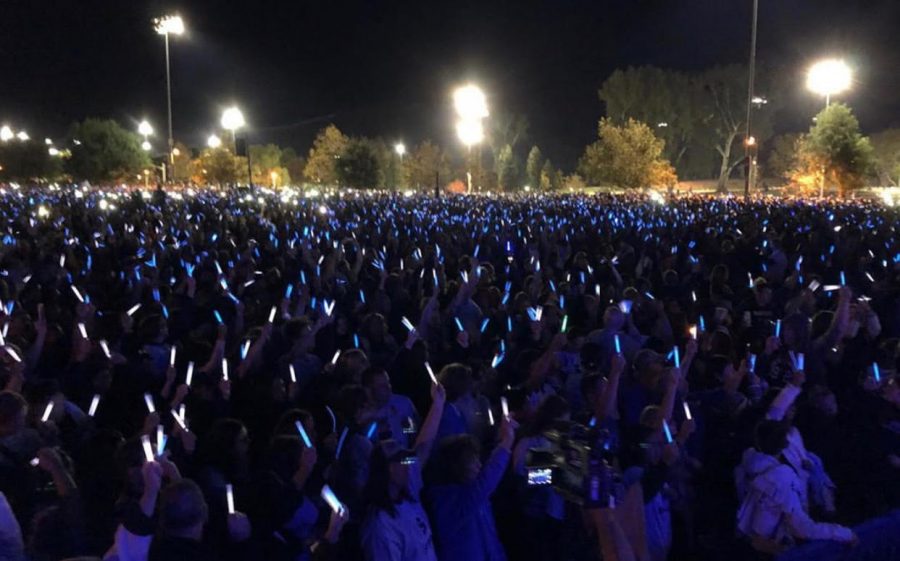 Over 10,000 people attended the vigil that was held in honor of the victims of the shooting. There were many religious leaders that led prayers as friends and families came together to share memories.

On Nov. 14, 2019, Emma Brown,* a student at Saugus High School in Santa Clarita California, got up early to get ready for school. The freshman got into her dad’s car and they pulled out of the driveway, ready to start their day. An incoming call on her phone, a sudden bundle of texts in all capital letters, and her life was changed forever.

She gasped. As her hand clamped over her mouth, she told her dad to stop the car.

“My best friend called me,” Brown said. “She said there was an active shooter on campus, and that I should not come to school.”

As soon as they got home, they turned on the news and waited. Texts came in by the dozens, and she soon learned of the victims: one, a boy in her class; the other her first friend at school. Her heart was shattered.

“News at our school travels fast,” Brown said, “so I quickly found out who the victims were.”

For the rest of the day, Brown texted friends and stared at the TV anxiously. The anger, stress and sadness inside her made the day drag on forever.

“I was in shock,” Brown said. “It was so unexpected, because you read about it all the time, but you never think it’s going to happen to you.”

She was safe, but she had no way of knowing how safe her friends who were already at school were. She decided to text them instead of call.

“I texted because I wasn’t sure if they were hiding in a classroom somewhere, and didn’t want their phone buzzing,” Brown said. “It was so scary.”

Emma’s friends could be hiding behind desks, trying not to breathe too loudly, texting friends and family sending love, genuinely not knowing if they would live to see another day.

The news was hard to process: two students — her friends — were dead.

Because of guns, students are traumatized.

In the wake of the shooting, Saugus High School closed early for Thanksgiving, so Emma didn’t have to go back for a while.  During the break, two days later, she drove to pick up her sister. It was the first time she had passed the school since the shooting. When she saw it, she was speechless.

“In front of the school was a giant, ‘Saugus Strong’ sign,” Brown said. “It was lit up in our school colors, with a giant red heart in the middle.”

The huge sign had twinkle lights that lit up the hillside — a flashlight in the dark. Emma bit her lip and her eyes started watering. The support didn’t stop there.

“At the end of the street is a church with a brick wall in front,” Brown said. “It has a bunch of posters saying things like ‘We love you Saugus,’ and ‘Saugus strong.’”

A few days later, the school held a candlelight vigil to commemorate the victims, and voice support for the students and teachers.   The community had been very supportive of the school — over 10,000 people attended the vigil, which was held in central park three days after the shooting.

“The vigil was nice,” Brown said. “But it was so beyond sad.”

There were many religious leaders that led prayers, and there were speeches from the principal as well as family and friends of the victims.

“There were a lot of memories shared,” Brown said. “Stories, photos and videos. Everyone was crying.”

Because of guns, Brown said, none of the students will ever feel completely comfortable at school ever again.

The school gave students the rest of the month off, and school resumed on Dec. 2. Brown was very nervous to go back. The day before, she tried to calm her friend’s nerves as he cried about how scared he was.  Brown told him to try not to be afraid, but she admitted that she herself was terrified.

“I think it will be very scary,” Brown said. “It won’t feel like a safe place.”

The school is structured so that each class is in a different building, much like a college campus, so students walk outside to get from class to class.

“People said the gunshots sounded like a binder dropping,” Brown said. “Every time there is a loud noise, or sirens go by, it’s still horrifying.”

Because of guns, students are angry.

Brown had been a part of a club at Saugus called Students Demand Action. Before the shooting, they advocated for gun safety regulations, and put up fliers around the school about safety within the school building. There are many of these clubs all over the country. After the shooting, their club had a new purpose.

The club has done many things to try to accomplish this goal.

“It’s a lot of fundraising,” Brown said. “We’re trying to get through to some companies, and bring everyone together.”

Brown has always been passionate about this issue. She never liked the idea of widespread gun ownership, and has long advocated for increased gun regulations.

“I have always been one not to like guns and to want good control,” Brown said. “Now, more than ever.”

After the shooting, Brown became even more passionate about this issue.

“I have a story to tell,” Brown said. “My friends were killed and I’m still here.”

This shooting poured gas onto a flame inside of her that now is burning even brighter. She wants to make a change because she has seen what happens when nothing changes.

“This is a really big issue,” Brown said. “But we are beyond ready to tackle it.”

Because of guns, students are not able to focus on their education.

On Friday, Dec. 6, Brown completed her first week back at school.

“The first day was awful,” Brown said. “I felt sick to my stomach all day.”

Her club and the staff had developed many support systems for students, which included therapy dogs, blankets, and more.  All work was optional and the students had frozen grades until the end of the semester. Many of the students went to the wellness center instead of their classes.

“I barely did any work this week,” Brown said. “This whole situation is just really awful and it’s hard to focus on school work.”

Brown was not at Saugus during the shooting. She was not hiding in a classroom or texting her parents that she loved them. She is not a “school shooting survivor.” She wasn’t shot or killed. She was not traumatized from hearing gunshots whizzing by her head. But her life, and the lives of her fellow students, will never be the same. Nor that of the principal. Or the bus driver. Or the cashier at the grocery store across from the school. Or the person across the country who met one of the victims at summer camp. That feeling of danger will continue to permeate throughout the school and community. It will change its climate for years to come. The frequency of these shootings change the way students view school. Students who have been through this have exit plans and strategies in the back of their mind. These shootings have changed this generation’s identity to make us more terrified.

Two people are dead and three injured. Millions of people are changed.

“I am now more mindful of everything,” Brown said. “It has already made me more proactive, but I’m going to try my best everyday to not take anything for granted.”