The duo ’til the end 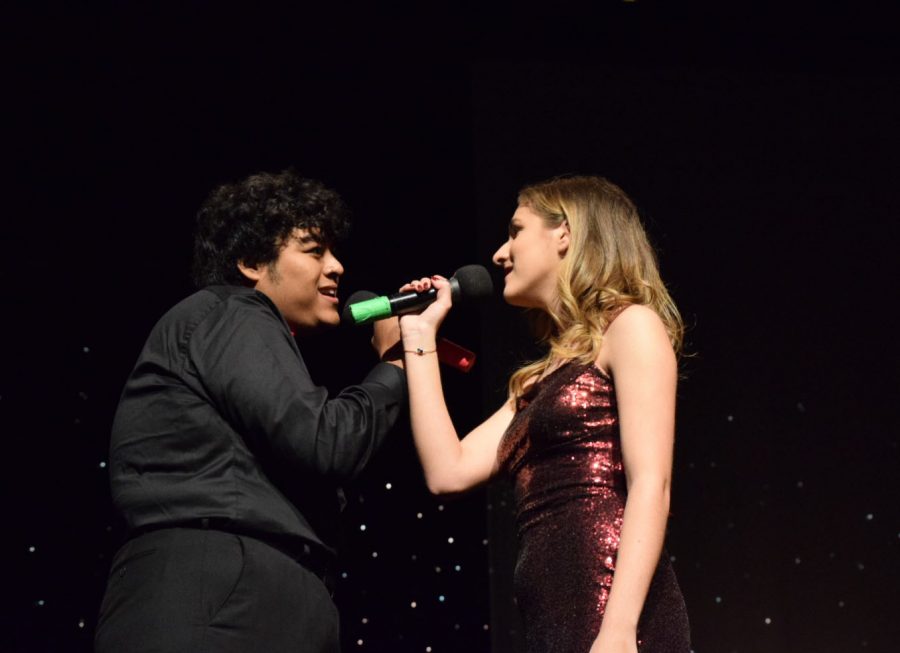 The auditorium was gigantic. It seated around 100 people, and at the time, it was a big deal to Bridget Roberts and Monty Granderson. For the past couple of months, they had been preparing for their duet with the Slauson Choir.

Every practice was perfect. But when they got on stage that night, there was no doubt in their mind that something would go wrong.

On the night of the performance, Roberts and Granderson stood at the front of the choir and were ready to blow it out of the water. But as Granderson began to sing, something happened that had never happened before.

It was a mess, but an unforgettable memory. The next day Roberts hid in the closet to avoid listening to the recording in class. This was the beginning of their partnership on stage.

Three years later, the pair encountered each other on stage once again when they participated in Rising Stars, a group of up-and-coming underclassmen. They had a duet for “Halo” and jokingly acknowledged that this would be the second duet they had together.

This experience on stage allowed Granderson and Roberts to learn more about their voices and how to act on stage while standing before hundreds of people.

“I had really bad stage fright back then,” Granderson said. “Right before “Halo,” I remember I was going to throw up.”

Fortunately, he overcame his fear and said over the years he has learned to calm himself down and take in the moment. Stage fright goes away if you take it head on.

Roberts and Granderson were scared freshman, preparing to perform on a bigger stage, for a sold out audience in Schreiber Auditorium, which holds 1,700 people. At the time, Roberts and Granderson were not as close as they are today. They had to hold hands at the end of their performance, which was extremely awkward for them. But neither of them wanted it to be their last duet.

“After “Halo” we always knew we wanted to do a song together in Future Stars when we got older and competed,” Granderson said.

Unfortunately, the next two years, when Roberts and Granderson were able to perform in Future Stars, they were not assigned to sing together. Senior year was their last hope.

When the list came out, Granderson called Roberts screaming; they finally got to sing a song together. They found out they were singing “Beauty and the Beast” and went to the practice rooms to prepare. One way they practiced and researched for their performance was by listening to different versions of the song by some of their favorite artists, such as John Legend and Ariana Grande’s duet.

This year, Pioneer Theater Guild (PTG) tried a new way to prepare for the big show. Instead of having vocal coaches come in for the entire duration of Future Stars, members of the band accompanying every artist helped them and they only had a couple of check-ups with vocal coaches from the University of Michigan.

“Our first coaching with a musical theatre director did not go too hot,” Granderson said. “Bridget and I just started laughing, just like sixth grade, and then we forgot the words. And then our time was up.”

After this practice, Roberts made Granderson stayed back in the practice rooms to rehearse for another 45 minutes. They figured out different riffs and choreography that would pair well with the song that would make “Beauty and the Beast” sound like an original piece.

Before they knew it, it was time to perform for another sold out audience, in the same auditorium they performed in together two years before.

“Monty and I enter from opposite sides of the stage for “Beauty and the Beast,” and we always looked at each other before we went on,” Roberts said. “When they would be announcing our intro, we’d always be looking at each other like ‘Ready to go!’ It’s calming to have another person there that you’re comfortable with.”

It was a totally different experience singing together senior year than it was freshman year in Rising Stars. They had grown to be very close friends who perform both in public and in the privacy of the practice rooms in their free time. “Beauty and the Beast” was a performance Granderson and Roberts dreamt of for years.

As they announced the finalists of the night, Roberts was in the top five for both “Beauty and the Beast” with Granderson, and her solo performance of “Home Sweet Home.”

Roberts was on one side of the stage, representing “Home Sweet Home,” and Granderson was on the opposite side for “Beauty and the Beast.”

“I was not really expecting it at all because the crowd’s cheers started off so loud,” Granderson said. “At first I was like, ‘Woah they broke it, I don’t know how they can get any louder.’”

When they announced the winners of Future Stars 2020 as “Beauty and the Beast,” it was a celebratory moment for all the contestants. Everyone surrounded Roberts and Granderson as confetti fluttered through the air and balloons floated down from the rafters.

“Everybody’s just happy for everybody and that’s what I love about Future Stars,” Roberts said. “It’s a really supportive environment and the competition is mostly for the audience.”

Granderson and Roberts described Future Stars as a time where you get to be a pop star. And as they wrapped up Future Stars and reflected back on their time, the closing is bittersweet.

“I just love that it’s full circle with Monty,” Roberts said. “Performing together one last time was a really nice way to end it.”