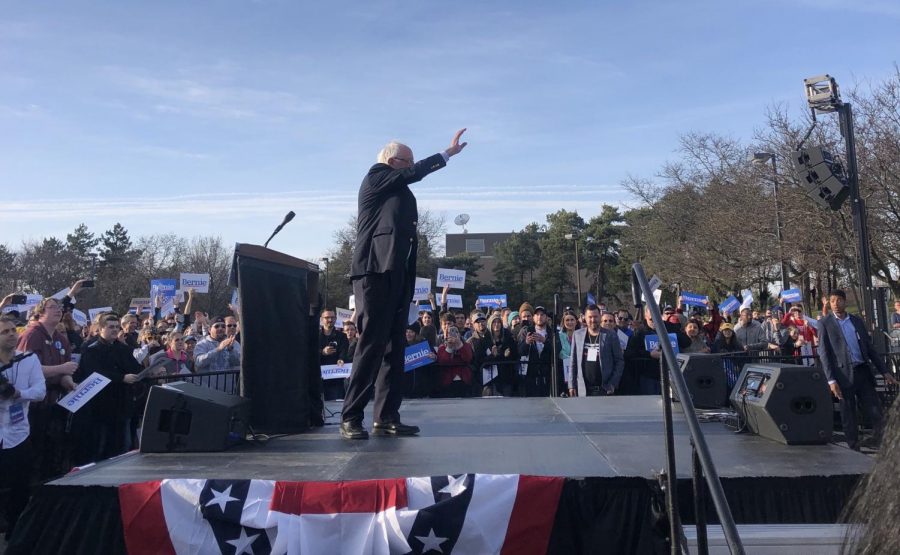 Sen. Bernie Sanders waves to his supporters at a rally in Warren, Michigan.

Senator Bernie Sanders first met John Weigel at a Nevada campaign stop in September. The senator’s voice was sore, so instead of giving his typical lengthy stump speech, he opened the floor to attendees to share their stories about the American healthcare system. An aide saw an audience member waving a piece of paper in the air, retrieved it, and brought it on stage to the senator. The audience member was John Weigel, a veteran suffering from advanced-stage Huntington’s disease, and the paper a medical bill — for 139,000 dollars.

Weigel rose and emotionally spoke about his 20 years of service in the Air Force, how he had been denied his supposedly guaranteed health care while struggling with Huntington’s disease, and how he was now tens of thousands of dollars in medical debt. He was comtemplating suicide, he said, because it had gotten so bad.

After the event, Sen. Sanders and his wife, Jane, spoke with Weigel. Over the course of a few months, with the help from the Sanders office, alongside Nevada senators, Weigel was able to get his insurance reinstated and a GoFundMe was created to support him.

At another Nevada event in December, Weigel addressed Senator Sanders again. “Thank you for rescuing me,” he said.

He attempted to give Sen. Sanders his military flight jacket, but the Senator refused the gift, instead accepting a patch from the jacket.

Weigel’s story is powerful because it illustrates that the personal is political and vice versa — these issues debated on the world stage aren’t abstract concepts; they’re real, intense struggles that everyday Americans are living through. And Sen. Sanders understands that.

I went to a Bernie Sanders rally for the first time when I was 14 years old. I was captivated by the vision that the Senator had for our country: building an America that works for everyone and is centered around justice for ordinary people. I later watched him win Michigan and then ultimately lose the primary.

But from that first time seeing him speak, I had no doubt in my mind that I myself would do everything I could to fight to fulfill his vision of justice and equity for all. Bernie Sanders, and the movement that propels him, lit a fire in me that will never go out. And I know I’m not alone in that.

When I watched Sen. Bernie Sanders’ speech announcing the suspension of his 2020 presidential campaign, I was filled with emotion: sorrow, hopelessness, anger. But in the following days, those negative emotions were replaced with feelings of gratitude. Gratitude for the senator, the movement he built, and the people that make up that movement.

While Sen. Sanders didn’t win, his impact is palpable. Sanders has politically empowered a new generation — he makes young people feel seen and capable. Sanders and his message are certainly unique in who they appeal to. It’s not often that a loud, white, 78-year-old man inspires an extremely diverse, young coalition. I think it’s because people are drawn to his sincerity, his unshakeable dedication to justice, his moral clarity, and his political courage. He proves that it is possible, albeit difficult, to maintain morals and love for humanity while working within a corrupt, self-serving system.

As he fades from the political mainstage, he lifts younger progressive leaders like Rep. Alexandria Ocasio-Cortez and Rep. Rashida Tlaib — amplifying their voices and ideas and mobilizing his vast supporter network to help re-elect them, living out his 2020 campaign slogan “Not me. Us.”  It’s solidarity in action, a Sanders speciality. Since his teenage years, Sanders shows up when justice calls, from standing with Black Americans in the fight for Civil Rights, to joining indigenous folks in opposing the Dakota Access Pipeline.

Sen. Sanders stands on the right side of history, even when it’s unpopular. And by doing that, he’s challenged public perception of progressive policies like Medicare For All. These policies that were once seen as too radical are now becoming more mainstream and a large part of that shift could be accredited to Sanders.

Of course, Sanders isn’t perfect. There are issues I disagree with him on and plenty of things I think he should’ve done differently. Our job is not to idolize politicians, but to push them to be better. However, gratitude is always a beautiful thing — and I am so immensely grateful for Senator Sanders.