Taking AP exams at home during the COVID-19 pandemic 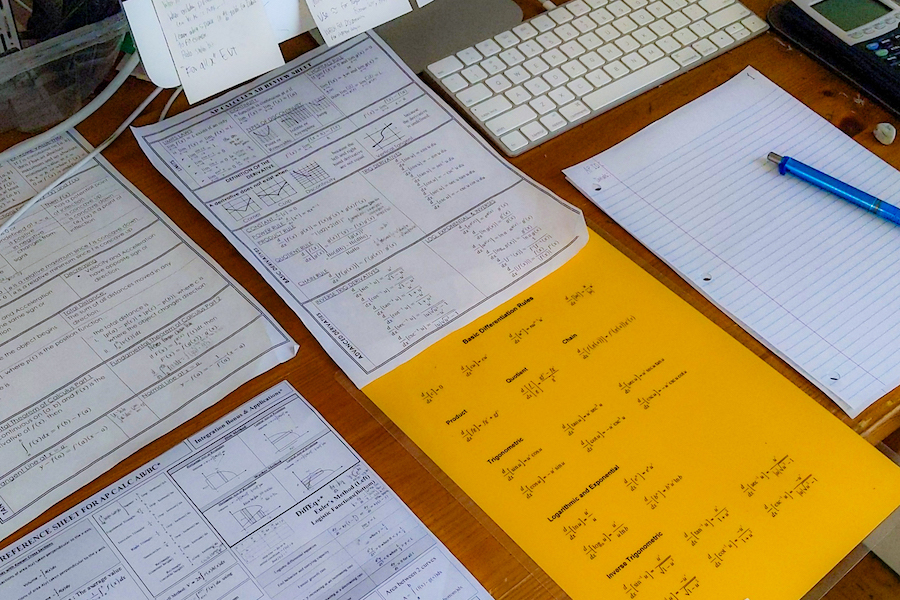 Calculus formula sheets accompany paper for writing the exam. With AP exams taken at home, they were designed to be open-note this year. However, collaboration between test-takers during the exam was strictly prohibited, and the College Board is suspected of creating a social media account to lure students who intended to cheat.

At 1:30 p.m. on May 12, CHS senior Ruhi Khanna clicked on the “E-Ticket” that directed her to the link where she would take the AP Calculus AB exam. After filling out her personal information, she waited for the first question to appear at 2 p.m.

“The countdown of those 30 minutes are so stressful,” Khanna said. “You’re kind of like, ‘I don’t know what to do.’ It just sets you up for being a nervous wreck.”

Khanna was one of millions of high schoolers worldwide who took the Advanced Placement (AP) exams this year, which provide college credit for students who earn a passing score. Students usually take a 2-3 hour exam at a testing center, but the COVID-19 pandemic precluded that possibility. On March 20, the College Board, which creates the exams, announced AP exams would only be 45 minutes long, open-note and to be taken at home.

The change worried Maneesha Mankad, one of CHS’ calculus teachers, who felt that the much shorter exams would not test students’ knowledge comprehensively. She was also concerned about preparing students for the exam with in-person school canceled. As Mankad’s calculus class is not an official AP class, her students prepare for the exam at the end of the year so that she does not overwhelm students who are not taking the exam. However, this meant that she was unable to prepare students taking the exam in person this year.

Staying motivated to study for the exam was also a challenge without in-person instruction.

“With school, you have a certain routine, and once you take away that routine, it’s really hard to reimplement your own routine,” Leo Kupperman, a CHS sophomore who took the Calculus AB and U.S. History exams, said. “You basically have to force yourself to do something.”

The College Board recruited AP teachers to review the content for the exam through regularly scheduled livestreams. After Mankad watched a week of the Calculus videos, she was confident that they would teach her students well, and decided that the best way to support her students was through office hours on Zoom to give them an opportunity to ask questions.

For Mankad, the main challenge in helping her students was making sure her students were completing the preparation for the exam.

“One of teachers’ jobs is to motivate and hold kids accountable and that’s very hard to do when the platform is not part of your classroom,” Mankad said. “My concern was, how do I know you guys are doing this?”

Without any way to make sure that her students were watching the review videos, Mankad had to assign other work. She also sent numerous Google Forms relaying information about the exams, but if they were not completed, she had no way to check whether students had received the information.

“I was so nervous on the day of [the] exam because I was like, if you guys didn’t go through everything that you had to and ran into trouble, all I could say to you was, ‘sign up for the make-up [exam],’” Mankad said.

“You’re not supposed to do all of them, but that’s just intimidating to look at,” Khanna said.

The process of uploading responses was seen as the most stressful part of the exam for Mankad’s students. For each question, five minutes were allocated to upload responses in one of three ways: by uploading a document, pasting their response, or uploading a photo.

For the Calculus exam, many opted to upload a photo, forcing them to take the entire exam on their phone, or send a photo from their phone to a computer, where they would then upload their response. While Khanna did not face any issues during the exam, she still had concerns about the submission process.

“It’s hard to save more time to upload the photos because you want to be working on the problems.” Khanna said. “It says at the end that if it’s completed you’re done, but in my head I have a worry that it didn’t complete and the photos didn’t submit or they came out bad. I wish there was some way to confirm that the photos are clear to read.”

Mankad wrote to the College Board that her students wished they had more time to upload their submission.

“I understand there’s issues with security, [but] internet issues can happen and that is a major issue,” Mankad said. “I even wrote to every single parent saying, ‘Please be aware, your student will be taking exams.’”

While none of Mankad’s students had issues uploading the exam, Kupperman knew several people in his AP U.S. History class at Huron High School who were unable to submit their responses. Issues with the uploading process have been a major source of criticism towards the College Board, which introduced a backup email submission process for the second week of AP testing. Otherwise, students had to request a makeup exam in June.

Another criticism of the exams was from international students in Asia, who had to take the exams well past midnight, because the exams were administered simultaneously worldwide for security reasons.

On May 19, a class-action lawsuit was filed against the College Board, alleging that they were aware of problems with the exam ahead of time, and that the new test format discriminated against students with disabilities and under resourced students. In addition to compensatory and punitive damages over $500 million, the lawsuit asks the College Board to accept time-stamped answers from the first week of exams for those unable to initially submit their answers.

“The College Board will vigorously and confidently defend against it and expect to prevail,” said Peter Schwartz, Chief Risk Officer and General Counsel for the College Board.

Despite the issues with the exam, many of Mankad’s students found the experience of studying for it to be positive.

“Students felt engaged and motivated and felt good about learning calculus at a deeper level,” Mankad said. “Which has always been for me the most important thing I want my students to take away. I’m super excited that my students had this opportunity during this pandemic — those who chose not to [take the exam], I understand, because it was too much stress at a stressful time — but there’s the other side, there were people who handled the stress by getting involved in work that is meaningful to them.”