Holding back the flood 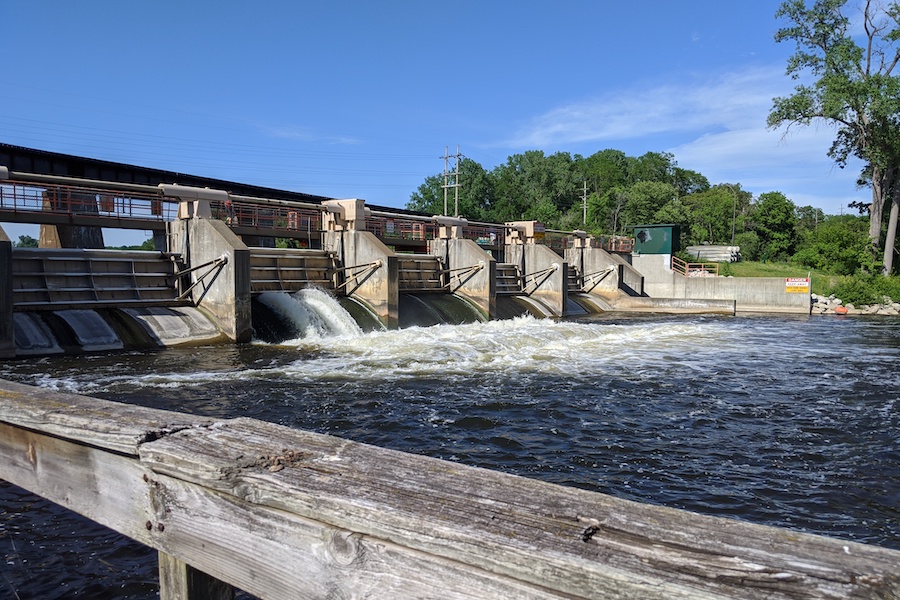 The Argo Dam on June 7., nearly three weeks after the rainstorm that caused the poorly-maintained Edenville Dam near Midland, Mich. to fail. "[That kind of storm] should've happened once every 500 years or so, statistically," Brown said. "And they happened within 34. We've seen lots of other large storms that have happened in that timeframe as well."

When Brian Steglitz saw the video of the collapsing Edenville Dam in Midland, Mich. on May 19, it reminded him of the importance of maintaining dam infrastructure.

“It’s just amazing what the power of water can do if it’s not managed properly,” Steglitz said. “It’s shocking, it’s sad, there are places around the state where people have neglected to make the investments that they need to make in order to make sure dams are safe.”

Steglitz is Ann Arbor’s Water Treatment Services Manager. In addition to overseeing the city’s water treatment plant and its related systems, he oversees the four dams run by the city of Ann Arbor: Barton, Argo, Geddes and Superior.

While the recent rainfall resulted in the Huron River flowing at a rate seen only a few times in the past decade, the dams are capable of withstanding more. At the peak of the storm in May, the river flowed at a rate between 3,000 and 3,500 cubic feet per second (cfs), considerably less than what the dams are designed for, a rate of at least 12,000 cfs.

“We’ve been doing all the right things in Ann Arbor in terms of making the investments that we need to make, doing the monitoring that we need to make,” Steglitz said. “I have no concerns about the flows that we’ve seen causing something like what happened in [Midland].”

Monitoring of dam conditions is done by a staff member on a weekly basis, who looks for visually identifiable issues, such as soft ground or rodent holes on the earthen embankment. During the COVID-19 pandemic, this work has continued. On a quarterly or annual basis, a professional engineer or regulatory agencies may carry out a more detailed inspection. Every five years, a safety analysis is conducted by an independent engineering consultant.

Maintenance of the dams involves numerous tasks, such as mowing the embankment, lubricating equipment for concrete dam gates and removing ice from the dams to ensure the gates can move. Larger maintenance projects, such as replacing the gates, repainting them to prevent corrosion and rebuilding hydroelectric equipment, can be particularly expensive. The city sets aside hundreds of thousands of dollars each year for the dams. However, the city has no plans to make major changes to them.

For Huron River Watershed Council (HRWC) Watershed Planner Daniel Brown, the failure of the Edenville and Sanford Dams highlighted the vulnerability of dams across Michigan when combined with climate change. The American Society of Civil Engineers (ASCE) gave Michigan dams a grade of a C- in 2018, citing the fact that 80 percent of its dams exceed the typical 50-year design life. Paired with the increasing frequency and severity of storms, Brown is concerned that dams cannot handle climate change.

“Our past assessment of climate has broken,” Brown said. “We have much less predictable, higher variability of flows with response to climate change. That’s one thing that could lead to more dam failures.”

Even though many of the Huron River’s dams are in fair or satisfactory condition, Brown is skeptical they can stay that way.

“Are they prepared not just for the conditions currently or in the next 10 years?” Brown said. “Are they built to withstand the conditions in the next 50 or 100 years? That’s very difficult to assess, and the danger goes up dramatically. It gets to a point where it’s probably just not feasible or cost effective to keep maintaining a dam.”

Even now, many dams are functionally obsolete and have a destructive impact on the environment by changing the nature of the river.

“[It’s] building a wall or a barrier right across your waterway that’s meant to carry sediment,” Brown said. “It’s meant to be dynamic and it’s stopping all of those natural processes in its tracks.”

Dams cause sediment — often contaminated in Rust Belt communities — to build up, prevent aquatic species from traveling and alter the water in ways that leave the river ecosystem vulnerable to climate change. By slowing the movement of the river, dams result in faster warming during the summer, making it difficult for wildlife to adapt. Additionally, the warm water in a dam reservoir prevents water layers from mixing. Combined with nutrients carried into the water by stronger storms, this can cause toxic algal blooms, which formed in the Ford and Belleville lakes on the Huron River in 2018.

A failure of a dam itself can also be incredibly damaging to wildlife. The Wixom Lake created by the Edenville Dam was suddenly drained when the dam failed, accompanied by immediate erosion. The ecosystem that had developed, which included threatened freshwater mussels, was suddenly exposed on the lake floor. Not only that, the ecosystems downstream were faced with a sudden surge of water. One of those were wetlands, which attenuated the floods.

While Brown recognizes that some dams, such as the power-producing Barton Dam, do have their uses, the HRWC advocates for the removal of obsolete dams, seeing it as an integral part of their mission to protect the river.

“Remove dams when you can and repair them when you can, is kind of the motto that we follow,” Brown said.

One of the dams HRWC has identified for removal is Argo Dam. The debate over the dam came to a head from 2008 to 2010, when the Michigan Department of Environmental Quality — now EGLE — ordered the city to fix issues with the dam’s embankment or remove the dam entirely. However, local rowing clubs opposed its removal, and the dam has stayed.

Steglitz argues that the ecological benefits would not justify its removal, as the Argo Dam is flanked by the Barton Dam upstream and Geddes Dam downstream, which minimizes the effect removing the dam would have.

The process of removing a dam itself can take mere weeks or months, but the planning often takes much longer. Feasibility and comprehensive design studies must be conducted first, with consideration given to the impact on wildlife and input from the community. The HRWC has worked with dam owners during the process. In 2018, HRWC explored the options for the aging Peninsular Paper Dam with the City of Ypsilanti, which the city voted to remove.

As a whole, Brown is optimistic about the future of the Huron River, which has seen significant improvements in the past few decades, particularly as its importance has grown in the eyes of the communities along it.

“The current route has been a really good case study for improving the health of an urbanized, Rust Belt, southeast Michigan River,” Brown said. “We’re kind of a microcosm of Michigan, we’ve got beautiful forested areas, beautiful state parks, we’ve got urban residential areas and a lot of agricultural areas in the watershed. When I was younger, I was focused on pie-in-the-sky issues and I wish somebody would have taken me aside and said, ‘Hey, make sure you take care of your own river, your own water close by.’”