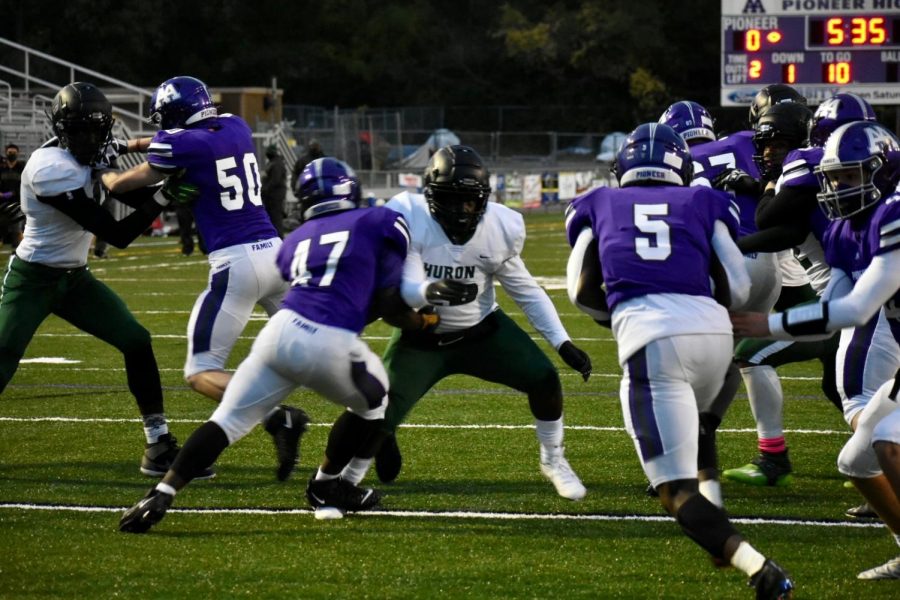 On Oct. 2, 2020, cross-town rivals Huron and Pioneer played on Holloway Field. Although the usual crowd full of students and family members weren’t in the stands, the energy of the game was still intense, as Huron fought to overturn an 18-year losing streak. With a final score of 18-8, Huron pulled out a win that might have changed the course of their season.

“It was time for a turning point in Huron history, and we wanted to make a change,” Kingsley Perkins, a Huron wide receiver and defensive end said.

Perkins was excited to help lead his team to such an important victory during his final season. The following Monday, it appeared that everything was normal, but two days later, the team got a call that a player had tested positive for COVID-19 –– their season was to be on hold. The athletic director, health supervisor and principal held a Zoom meeting to discuss the protocol and the next steps going forward.

The Huron Football team was mandated to a two week quarantine beginning on Oct. 7. The team was advised to get tested in the following week and before returning to play. With only three games left in their regular season, Huron football’s quarantine period forced them to cancel two games, leaving them with the possibility of just one more game.

The players had been following the district and state regulations for COVID-19: this included not allowing spectators at games, wearing masks while on and off the field and cleaning equipment regularly.