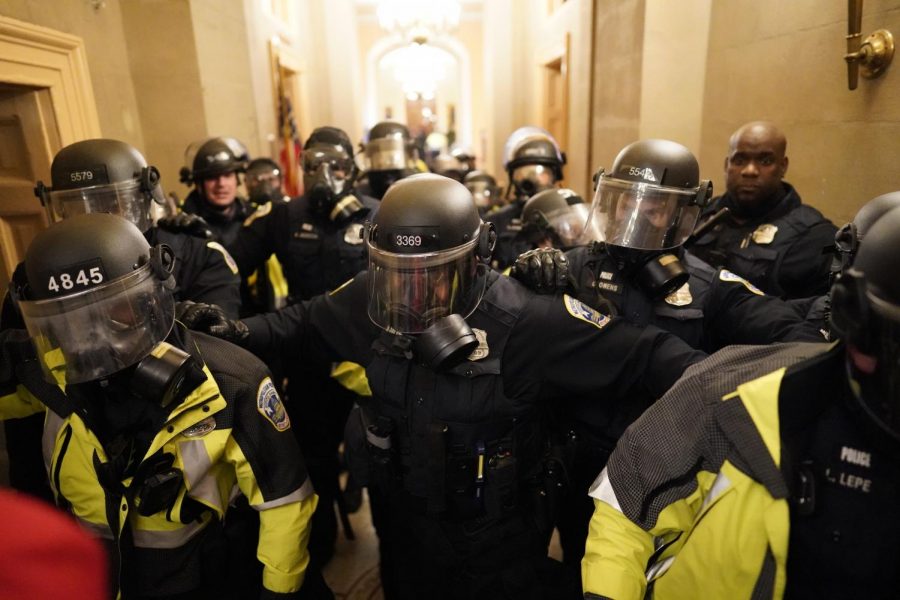 Today, thousands of President Donald Trump’s supporters stormed the U.S. Capitol building to protest the results of the presidential election.

The Senate was in session, certifying the electoral college vote when Trump supporters gathered outside the building. The rioters pushed over barricades and stormed the Capitol steps. Capitol police held back the tide of rioters with smoke explosives, but they eventually broke through the law enforcement barricade and entered the building around 2:15 p.m.

As the mob outside stormed the Capitol steps, the building was placed on lockdown. Government officials, including Vice President Mike Pence, were escorted out of the Capitol building by police and Secret Service members as Trump supporters poured into the building, breaking windows and climbing walls. Rioters forced entry into the Senate chamber, where government officials were instructed to take cover. Police used tear gas and drew weapons as lawmakers took shelter on the floor. Speaker of the House Nancy Pelosi’s office was vandalized while hundreds of other rioters gathered outside the building showing their support for President Trump.

At 3 p.m., the Washington D.C. National Guard arrived to control the rioters and empty the building. A woman who was part of the riot was shot inside the building and was rushed to a nearby hospital, where she later died.

A pipe bomb was found in the Republican National Committee (RNC) offices and was defused by a bomb squad. The Democratic National Committee (DNC) received a mysterious package today as well but it has not yet been identified.  The DNC and RNC are within walking distance of the Capitol building.

President Trump continued to fan the flames in a video that repeated misinformation about the presidential election results.

“It was a landslide election, and everyone knows it, but you have to go home now,” President Trump said in a video posted to his Twitter.

The President’s tweet was quickly restricted from being liked, commented on or retweeted.

“This claim about election fraud is disputed,” read Twitter’s notice on the tweet.

Some members of Congress called for Trump’s immediate impeachment — which would be his second — claiming that he is responsible for inciting the riots at the Capitol.

“I am drawing up Articles of Impeachment,” said Representative Ilhan Omar (D-MN) in a tweet. “Donald J. Trump should be impeached by the House of Representatives & removed from office by the United States Senate… We need to fulfill our oath.”

The Capitol was secured by Capitol police at around 6:00 p.m. after nearly four hours of rioting.