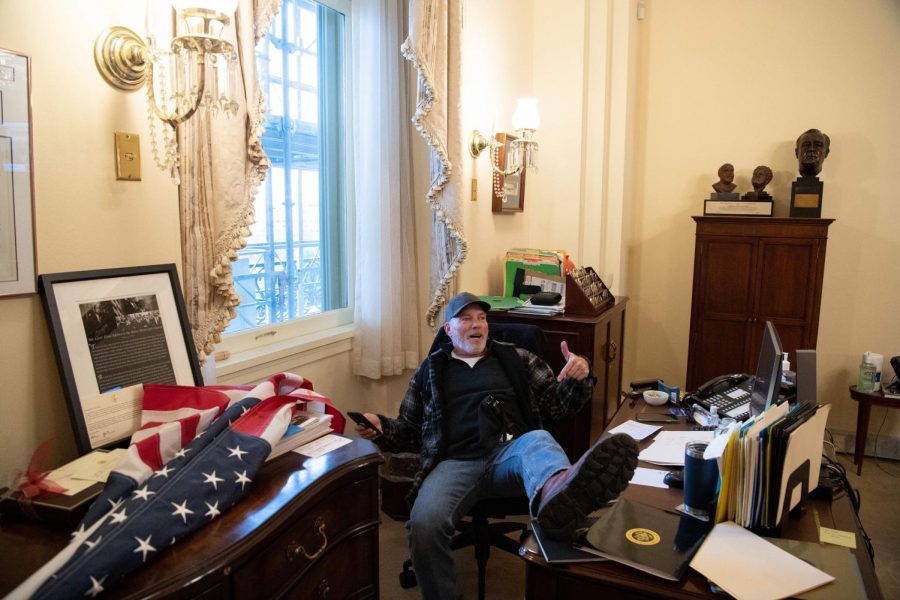 A supporter of President Donald Trump sits inside the office of U.S. Speaker of the House Nancy Pelosi as he protests inside the U.S. Capitol in Washington, D.C., on Jan. 6, 2021. Demonstrators breached security and entered the Capitol as Congress debated the a 2020 presidential election Electoral Vote Certification. (Saul Loeb/AFP/Getty Images/TNS)

“This is not America.” “I am shocked to see this.” “Why is this happening?” Words of surprise covered my feed yesterday afternoon.

Those words confused me.

I was not surprised by the clear image of America shown yesterday.

Jan. 6, 2021, was the most white, American day I have been alive to see. White people — as they do every day — tested the limits of their privilege. Armed, they walked to the Capitol building. Armed, they pushed past police. Armed, they climbed walls, broke windows and stole government property.  Officers held their hands, picked them up and let them in. This scene was equally unsurprising. In 2016, 84% of police officers voted for Trump, according to Police Mag.

The attack is deeper than white privilege: it is an act of white supremacy. The culmination of four years stoking the coals. The roots of the American Dream, where the white man can do anything. Yesterday, I watched the police protect this dream.

$740 billion, and people walked into our Capitol building. Let that sink in. (In comparison, we spent $64 billion on education.)

The group that attacked the Capitol has been called a lot of things: protestors, rioters, Trump-backers, a mob.

Let’s call them what they are: domestic terrorists. Most of them left the grounds of the Capital unscathed, with souvenirs, in triumph.