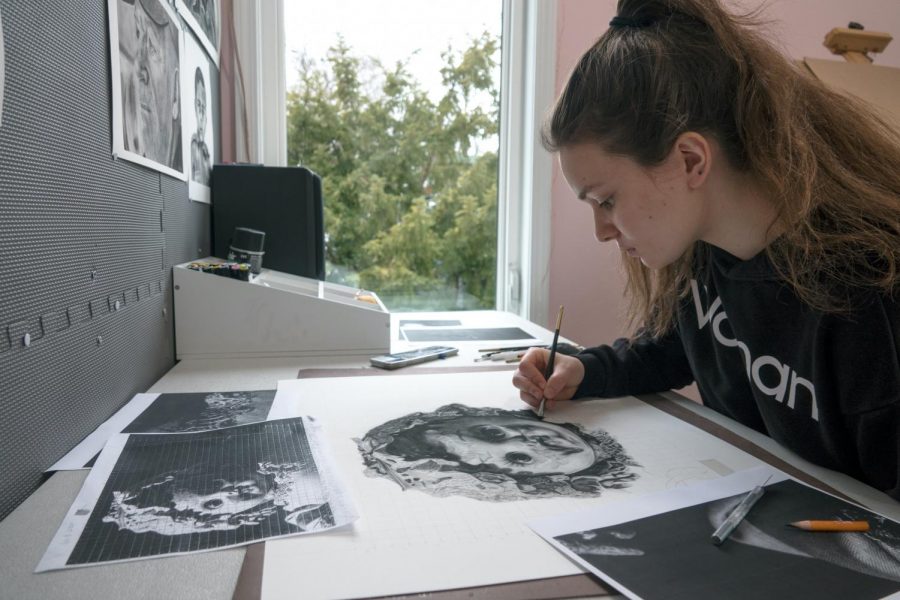 CHS sophomore Ryan Thomas-Palmer’s most recent piece of art is a life-like charcoal portrait of Deborah Nyuon, a refugee from South Sudan. Photographer Giles Duley recently took the photo of Nyuon, and Thomas-Palmer was inspired to recreate it on paper. She was especially struck by Nyuon’s eyes, as well as her calming presence.

“My family did a 24-hour scavenger hunt over the summer, and one of the categories was drawing a picture in charcoal by Giles Duley,” she said. “I couldn’t draw [Nyuon] in 24 hours, but when I saw the picture on [Duley’s] website I was just kind of like, ‘I have to draw this. I can’t call myself an artist and not draw this.’”

Thomas-Palmer especially loves to draw people, partly because of how challenging it is. A single mistake in the size of someone’s eyes, the color of their hair or the shape of their nose is very noticeable, she said. Drawing people also allows her to tell stories through her art and to create something that has a deeper meaning, in addition to looking beautiful on the surface. She works almost exclusively with charcoal, and nearly all of her drawings are based on photos.

“I’m a realist, both in my art and in [my] life,” she said. I wouldn’t say I’m optimistic or pessimistic, if it happens it happens. I don’t really know how to make something up that doesn’t look real, so I just like to try and make [my art] as close to a photo as I can.”

Thomas-Palmer has enjoyed drawing and doodling for most of her life, but she began seriously honing her skills as an artist around three years ago. Two years ago, she created @ryansart_1813, an Instagram account dedicated specifically to her art. Since COVID-19 hit in March it has gained a lot of traction, going from 100 followers to over 2,000 in only a few months. She posts pictures and videos documenting her progress, as well as photos of her finished works.

Although Thomas-Palmer considers herself to be an impatient person in her daily life, she spends countless hours on each piece of art she creates. Her drawing of Nyuon took 31 hours.

“It’s almost my meditation,” she said. “Some days I don’t want to draw, but then other days I’ll go to my art studio and stay there for seven hours,” she said. “It’s just really easy to get lost in it, it’s like going into a different world.”