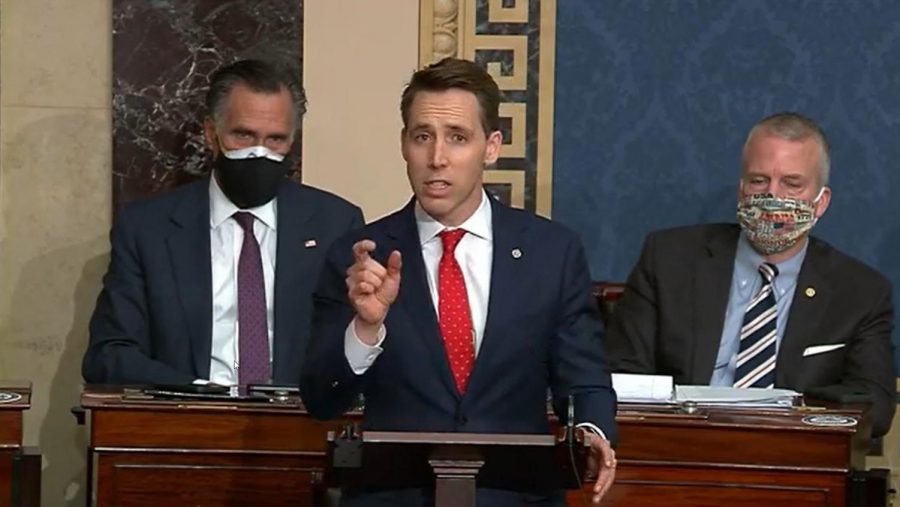 In this screenshot taken from a congress.gov webcast, Sen. Josh Hawley, R- Mo., speaks during a Senate debate session to ratify the 2020 presidential election at the U.S. Capitol on Jan. 6, 2021 in Washington, D.C. (congress.gov/Getty Images/TNS)

On Jan. 6, 2021, what I like to call ‘rioting insurrectionist state-sanctioned domestic terrorists’ breached the U.S. Capitol.

I had left a Zoom call and joined my parents in the family room to watch CNN only minutes before the storm broke, expecting to spend a few mildly therapeutic hours watching Republican objections to President-elect Joe Biden’s resounding victory be hammered down. The Georgia results had come in; I was determined for this to be a good day. Instead of raging at Republican objectors to the certification, I was going to take solace in their defeat and the victory of the Constitution.

I still remember the moment when CNN first cut away from the proceedings within the chamber to show the crowd outside. Initially, I was irritated — I wanted to hear the speeches; why were we even giving this circus outside airtime?

Then the reports of a breach in the Capitol started to come in. After that started, I don’t think the news went off until I finally staggered off to bed that night–aside from a few minutes when we lost power because a literal fuse blew, I think from displaced emotional charge in the room.

There were many things that made me both furious and despondent on Wednesday. The police response, or lack thereof, especially when contrasted with the response this summer to BLM protests. Trump’s ‘statements’ that only fanned the flames. The fact the terrorists were playing as they ambled away, escorted by police, “What the World Needs Now is Love.”

But for me, the last straw on a day of rising fury came when Congress returned to the Capitol that night, to finally return to their Constitutionally-mandated task of certifying the results of the election. A task, I should note, that for decades has been little more than a formality.

In the Senate, as they debated whether they should delay certification to investigate nonexistent fraud, politicians from both parties stood and condemned the violence. This was expected; this was the right thing to do.

And it made me furious beyond words. Why? Because most, if not all, of the Republicans who now ponderously stood to shake their heads solemnly and decry the mob had directly contributed to its formation.

For four years, as Trump threatened the integrity of our republic, stirred up hatred, and violated every norm of respect and dignity for his office, these lawmakers misplaced their backbones. At best, they stood by and let him trample upon the fabric of our democracy. Most actively endorsed and cheered him on.

When Biden addressed the terrorists, he said this violence and rioting is “not who we are.” But this is what Trump is, and all the Republicans on Capitol Hill knew it. From his description of the terrorist attack in Charlottesville, Va. as an event with “very fine people on both sides” to telling the Proud Boys to “stand back and stand by,” this has always been who Trump is. He has thrived on and reveled in violence, as long as those who perpetrate it work towards his agenda. And when those in the media and elsewhere have pointed this out to congressional Republicans, they have grown hard of hearing, claimed ignorance, or insisted the situation had been misreported.

As the President spread misinformation and lies about the 2020 election, most congressional Republicans stood by and let him; many repeated him and in doing so helped legitimize his baseless claims of fraud. Republicans poured gasoline onto this fire lit by Trump, then acted surprised and horrified when it grew into the raging conflagration we saw Wednesday. The only reason they cared this time, the only reason they even deigned to notice the fire raging, was because they finally were the ones who got burned.

And even in the same breaths with which these GOP lawmakers ‘condemned’ the violence they had helped incite, many of them continued to encourage it! Even after fleeing the rioting mob incited by Trump’s lie that the 2020 election was stolen, 147 congressional Republicans still voted to block certification of the results of the 2020 election. Sure, the motion was shot down. But the fact remains that these 147 Republicans continued to support a lie undermining our democracy even after seeing the violence that lie can lead to. In doing so, they lent their support to said violence, and any mumbled condemnations of it in their speeches ring hollow.

Admittedly, there were some Republicans who voted to certify the results, including most Senators. But to me, that does not excuse them. Well and good that they finally found a shred of integrity. But as I’ve stated, almost all of them have enabled this president and his supporters for years. Did it take an attempted coup by Trump and his supporters for them to wake up?

The height of Congressional Republican hypocrisy that night to me was reached when Senator Josh Hawley of Missouri stood to say his piece. Hawley was one of the few Republican Senators who stated in advance that he would attempt to block the certification of Biden’s win. In fact, after the riot, he was the Senator who cosigned a House objection to Pennsylvania’s election results and continued the time-wasting objections. For that, as well as his continued support of Trump, he bears plenty of culpability for the events of yesterday. But that is not all. As he entered the Capitol Wednesday, with crowds of soon-to-be-rioters already gathering, Hawley raised his fist to them in a gesture of support. For him, only hours after his expression of solidarity, to then with a straight face condemn the violence and pretend to have no responsibility for the day’s insurrection…the hypocrisy of his speech nearly brought me to angry tears. He has some nerve.

One of the last times this country witnessed a large-scale insurrection was nearly two centuries ago, when a number of states rebelled against our nation in the Civil War. Back then, the Republican Party was newly formed, and had just elected Abraham Lincoln as president. One of the last times blood was shed on the floor of the Capitol was in 1856, when proslavery Representative Preston Brooks caned and severely injured Republican Senator Charles Sumner on the Senate floor for fiercely denouncing the south and its reprehensible practice of slavery. What has happened to that party, the party of Lincoln? When the Republican party was founded in 1854, their opposition to slavery and its spread was a core tenet and abolitionists formed a huge chunk of their base. Yesterday, the pro-Trump domestic terrorists flew a Confederate flag in the Capitol. Lincoln, the first president Trump’s party elected and someone Trump delights in comparing himself to, died fighting the Confederacy. What on earth went wrong?

It is very clear that today’s Republican Party has reached a crossroads. For years, arguably decades, they have been traveling down a dark path — a path of dog whistles and anti-democratic rhetoric that has culminated in Donald Trump. Some veteran Republicans over the last few years have recognized that he is not the Republican Party that they joined and have spoken out against him — Republicans like Senator Mitt Romney and Governor John Kasich. But others, like most of those in Congress today, have fallen in line with him and his policies — whether out of fear or genuine agreement, who can really say?

Wednesday was an unignorable display of exactly what Trump’s Republican Party looks like. If the racist and fascist reality of that party somehow wasn’t obvious before, it certainly is now. Every Republican in the nation today needs to ask themselves if the domestic terrorism they witnessed Wednesday is something they support. Supporting Trump, or voting for politicians who do, condones that sort of attack. Those who believe that sort of insurrection is not what they signed up for either need to make a break from Trump and create their own party — or impeach, remove him from office, and expel him from the Republican Party. They must make it clear Trump and his actions are not what they as a group stand for.