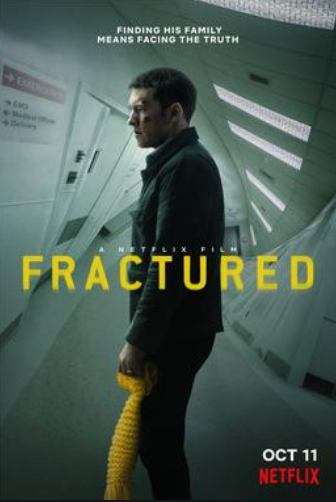 In 2020, I wasn’t really looking to watch many scary, psychological, thriller movies, because it felt as though the world was already in one. Though the world is still filled with conflict, when I came across “Fractured” on my Netflix feed I decided to give it a watch.

This movie begins with a husband, wife, and daughter driving in the car. In a conversation between the couple, it comes up that the husband, Ray, doesn’t do things for the family anymore. You can feel the tension in the air. The family stops at a gas station, and his wife, Joanne goes in to look for something. While she is inside, Ray becomes distracted and Peri, their six-year-old daughter, wanders away. She is confronted by a dog, and she backs up until she falls off of the ledge of a construction site. She lands on the ground, and Ray jumps in after her. What happens after shapes the plot and controversy of the movie.

We are shown that both Ray and Peri are mildly injured, and they rush to the hospital. Ray, trying to prove that he is dedicated to his family, swerves around cars, nearly getting into an accident, in an attempt to get to the hospital faster. The scene at the hospital is nothing out of the ordinary, with Peri and Ray’s wife, Joanna going to the X-Ray room so they can check out Peri’s injuries.

But then the trajectory of the movie shifts: Ray believes that the hospital has taken his family away and that they are hurting them, while the hospital insists that the family never checked in, that it was only Ray. Throughout the movie, it is hard to tell who to believe. Ray is trying so hard to prove that he will fight for his family and to protect them, that you can’t help but feel empathy for him and hope that he is doing the right thing.

I would recommend this movie to anyone looking for a surprise or someone who enjoys thrillers that will keep you on the edge of your seat and keep your brain thinking. I found it hard to keep my eyes away from the screen, and this could very easily be the case for you as well.