As CHS’ virtual school year approaches its eighth month, students and teachers face an unprecedented challenge — virtual finals. While the school year of the unknown offers increased anxiety for some, others are taking comfort in different learning and testing methods. 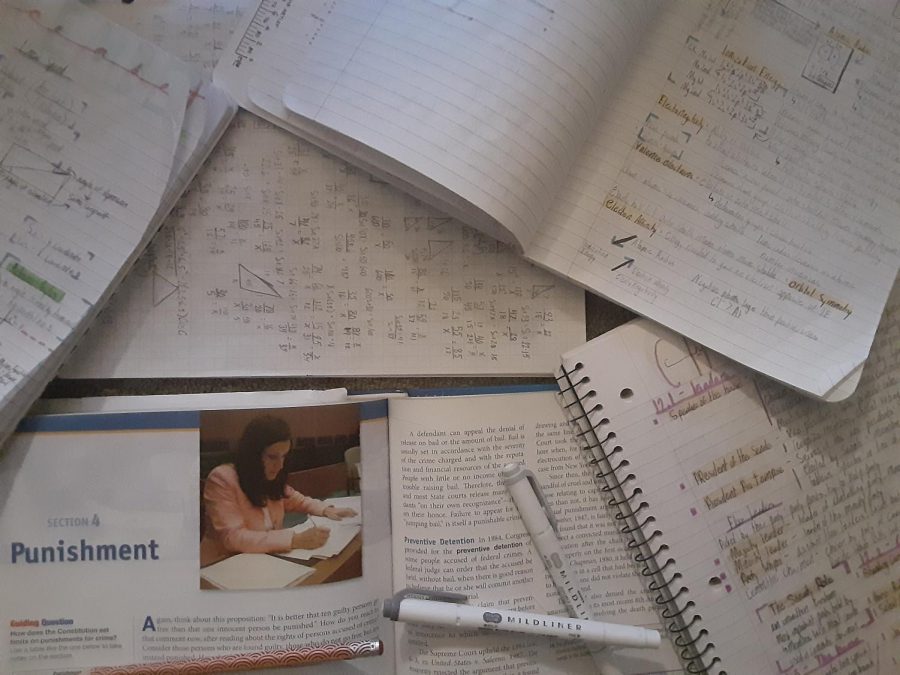 CHS junior Chelsea Clemetson is nervous for finals this year after taking a heavier course load, but has started to see traditional final formats being replaced with other options.

“In my poetry class, our final is going to be this project that we’ve been working on the whole semester, and in Chemistry, we’re just doing cumulative grades from tests and everything that we’ve done so far,” Clemetson said. “In Calculus, there will be a final sort of multiple-choice section, but a lot of the pieces of the final we’ve done over the course of the semester as well.”

But Clemetson is still feeling the weight of online schooling, especially as it is her junior year, which she has been told is the hardest year.

“I’d like the teachers to know that we are all really, really stressed, especially the juniors, because according to so many people, junior year is supposed to be the hardest year of your life,” Clemetson said. “And it’s not really that great to have it over Zoom. We get to junior year and it’s a global pandemic and nobody can leave the house, and no one really knows how their grades are gonna turn out because everything is so stressful.”

Julia Kirschenmann, another CHS junior, has found some virtual testing to bring more stress than in-person.

“I feel like when you’re in-person and you’re doing normal finals, you go in, you give it your best shot, you prepare as much as you could or as much as you wanted to,” Kirschenmann said. “But then with online schooling, from my experience with tests we take, no matter how much I study, I feel like I could have done more.”

To study for finals, Kirschenmann plans on using Quizlet, an online flashcard platform, and taking breaks in between study sessions. She has found benefits to online school such as the new learning platform Schoology to help her in her studying.

“I find it [Schoology] more convenient because I can see all of my assignments, what I did do, what I didn’t do, the score I got, and any comments that my teacher made,” Kirschenmann said “I feel like that will help me when I start studying more for finals because it’ll be much more organized.”

For some seniors, although the year brings disappointments, online finals provide a bit of relief.

“Finals seem less of a threat or a problem to me, and I feel like that’s not a great mentality to go into finals,” said Shailen Chugh, a Pioneer High School senior. “It’s good to have a little bit of stress just to keep you going.”

The decreased final stress is representative of Chugh’s entire online senior year. After a rough start filled with college applications, he has learned to adjust. One of the ways he has altered his daily life is by meeting with friends virtually.

“I feel like it’s almost as if we’re more connected now because we kind of just rely on each other so much,” Chugh said about his friend group. “We text all the time, we FaceTime for different assignments and it’s a lot of fun. I feel like it’s a lot more bonding. It’s easier to call someone than to drive over to them.”

On top of increased socialization, Chugh has been trying to keep school as “normal” as possible by turning on his camera and participating. Although difficult to come out of his shell, he’s found it helpful in classes. But one thing that cannot be substituted, and will be missed, is pre-final bonding.

“In-person, I remember standing in the hallways quizzing each other on random things before a final,” Chugh said. “And I kind of miss that pre-final bond because when everyone is stressed about the same thing, there is that group bonding that comes in and I feel like that’s an underrated feeling — the stress before a test bringing people together.”

Although Chugh has felt out of the loop plans for finals, he knows from teachers that they will be more project than test-based. In previous years, he would have a schedule for final studying. But this year, a lack of information has prevented him from studying so far.

“Let us know what’s going on,” Chugh said. “I just would love to know what my finals are gonna look like, what I’m going to do in finals week if we even have the final. I just want to know if I should be studying or not.”

For Aska Wurtz, a senior at Huron High School, virtual finals have provided more clarity. As an International Baccalaureate (IB) student, many of Wurtz’s classes require a large final essay. While she struggled in previous years with not knowing specifically what to study, this year’s finals involve turning in a rough draft of her essays she has been working on for months.

Wurtz has also been collaborating with friends to ensure that she meets all class deadlines. They have a Google Sheet for their shared classes with dates, and she has been pacing herself to make sure that she finishes work on time.

As an IB student, Wurtz would typically have assessments this spring that classes have been prepping for all year. But the assessments were canceled last year due to COVID and may be canceled this year again. The assessments determine final grades, and Wurtz has been struggling with the uncertainty of the end of the year. But she’s found tips to help her get through the year.

She’s been keeping herself “in check” to make sure she’s focused, creating relationships with teachers so she can comfortably speak to them, and writing out assignments instead of typing them.

“I recently found that I really like writing stuff out on notebooks for my essays and stuff like that,” Wurtz said. “Since March of last year, I’ve gone through four full notebooks and it’s so satisfying to finish the notebook. It’s something that I’ve become a little bit obsessed with.”

Despite the challenges of online school, Wurtz is staying positive.

“It’s different this year obviously in a lot of ways, but as many cons as there are, there are a lot of pros as well because I enjoy getting to work on my own and getting to sleep more,” Wurtz said. “I think as bad as it is, I really recognize the fact that teachers are really trying their best with what they’re given at the time, which isn’t a lot, so I think we will manage.”

For CHS math teacher Maneesha Mankad, her entire year has been completely rewritten. She has recreated every single one of her lessons, as opposed to continuing previously written lessons, to adapt lessons for online instruction.

“I have stayed up night after night,” Mankad said. “Constantly grappling with the situation and saying, ‘What can I do to make this easier.’ And I want kids to know that I know it’s hard for them. I realize it. And I tried to incorporate it into my lessons by trying to make sure they are as accessible as possible.”

Her finals have also been changed this year. Her exams this year incorporate projects, previous test grades and even audio recordings. She stresses that although her finals will test student comprehension, students will not have to sit down and study for finals like in previous years. She’s also helping students to redo tests from earlier in the year to improve their grades.

“To penalize students for something that happened at the beginning of the year when people were adjusting is not appropriate for them to have to carry that with them all the way to the final so I’m really glad that we decided that we would give people a chance to redo some of them so that they can improve their score,” Mankad said.

“Students let your teachers know what helps you,” Mankad says “And we will put it into action. I just need to know because we [teachers] are looking to hear that feedback from students.”