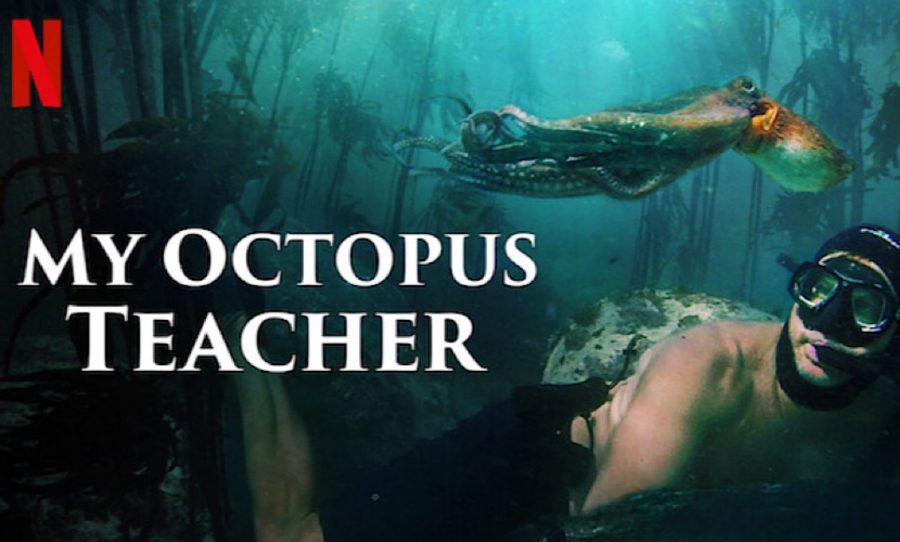 “My Octopus Teacher” is a new documentary out on Netflix. It documents filmmaker Craig Foster’s year long escape into the underwater world right behind his house and the octopus he meets there. As the movie goes on, Foster not only develops an intimate understanding of the underwater geography, but also a love and commitment to the creatures that live there.

It’s easy to see why Foster fell in love with this aquatic world. There is just something so enchanting about it: the wafting kelp forests, the octopus’ flashing colors and vibrantly colored fish and crustaceans. The vegetation and creatures are so foreign to anything you would find on land — so foreign, it’s hard to imagine they would even exist on Earth. It’s this alien-like nature that makes the visuals in this movie so profoundly beautiful and makes every underwater scene feel new and exhilarating.

It’s not only the visuals that make this movie so exciting though. While the creatures look strange, their behavior is even more out of the ordinary. For example, the first time we meet the octopus that the movie follows, it’s hiding in a pile of shells that it molded around itself. Towards the end of the movie, after a long intense battle, the octopus outwits a Pyjama shark using the same strategy. This is one among many chaotic moments of octopus brilliance this movie documents.

However, “My Octopus Teacher” isn’t perfect. At the very beginning of the movie, Foster explains that he escaped to the ocean because of a sense of purposelessness. Throughout the movie, whenever Foster returns to this narrative it only seems to detract from the events unfolding underwater. For example, when the octopus loses a limb and it grows back, he compares its regrowth to his own personal regrowth. It was this moment among many others that had me wondering, “who cares?” But these feelings never lasted too long, because Foster would go back underwater, and I would once again be enchanted by the beauty of the animals that live there.