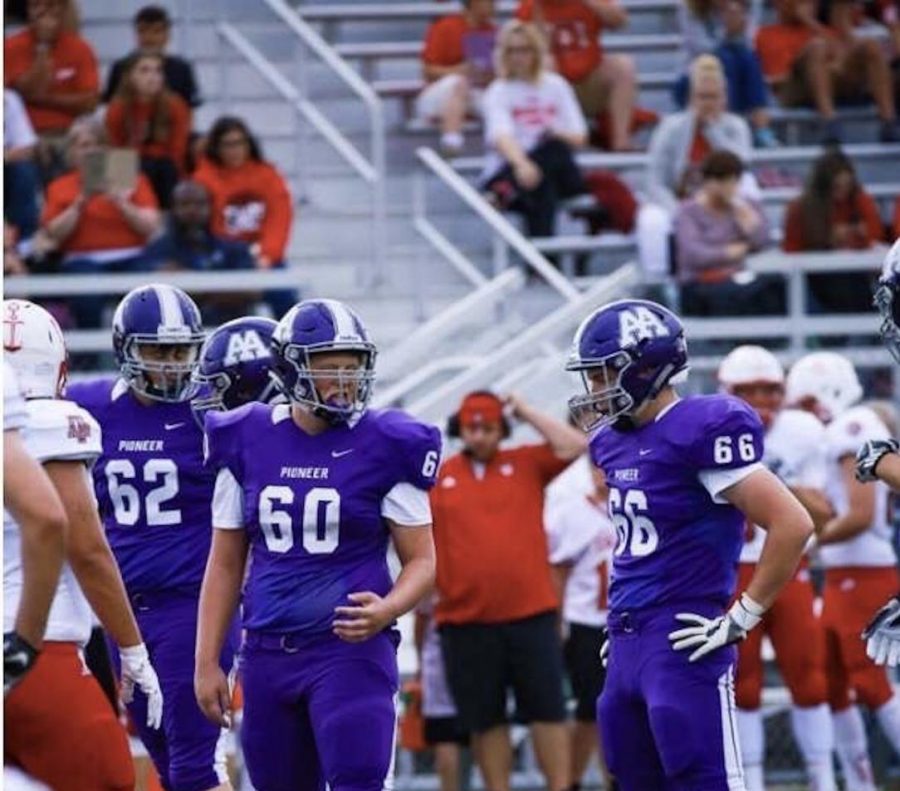 Nate Mosher has been a center for the Pioneer football team since his freshman year. As a center, he never got to run routes. But after practice one day, Mosher was running routes with his teammates for fun. He went up to catch a ball, and when he came down, he landed wrong; his knee snapped.

Mosher was out for the remainder of his final season with a torn ACL.

“It was brutal for my mentality just because I connect so much of my life with football, and I have been working for 10 years,” Mosher said. “It just seemed like my best season was taken away.”

Football was on Mosher’s mind all the time. He started playing football at a young age for an Ann Arbor peewee team which inspired him to continue playing at Pioneer High School. Mosher started playing because of his brother and friends, and he grew up watching Michigan football as a family ritual.

“The first practice was so tough [after my injury,]” Mosher said. “I got there and I just started crying. It was so hard because l was watching them do everything that I’ve been doing for so long. Also I’ve noticed that I’m probably never gonna play the sport ever again.”

For the remainder of the season, Mosher helped coach his teammates and showed up as much as he could, but he felt like he had to move on and fill the extra time with new things.

“I just kept [the injury] out of my mind and am constantly doing stuff,” Mosher said. “I keep checking stuff on my lists because there’s so much going on. I watch a lot of TV, take a nap. I can’t function without a nap.”

The injury itself was hard enough for Mosher to cope with, but alongside it he has been trying to keep up with school work, adapt to virtual learning, apply to college and stay grounded in the middle of a pandemic. His recovery has taken away from the amount of time and energy Mosher has to complete work and his applications. He has been working hard to keep up with all the stress of senior year while rehabbing his injury.

“It used to be that I would only think about football pretty much all the time because I was such a big part of the team,” Mosher said. “But now I’m focused a lot more on the next chapter of my life: college.”

Mosher has had thoughts about playing college football, but his size puts him at a disadvantage to compete playing as a high level center. He intends to go to a big college, preferably a Big Ten school, and has recognized that what he is looking for futuristically, doesn’t accommodate football.

Even though Mosher has decided not to play football in college, he plans to find a way to incorporate it in a future career. Mosher is interested in sports analytics and working behind the scenes in sports.

“I love sports, and I’m pretty good at math,” Mosher said. “So I think combining those would be pretty fun.”

Coming to terms with a life changing experience is hard. Mosher went from football filling up the majority of his time, to it disappearing. He has decided to think optimistically about his future rather than sulk in the moment about his injury — which is extremely hard to do during the state of this world.