Unmuted: Agree to Disagree? Let’s Not. 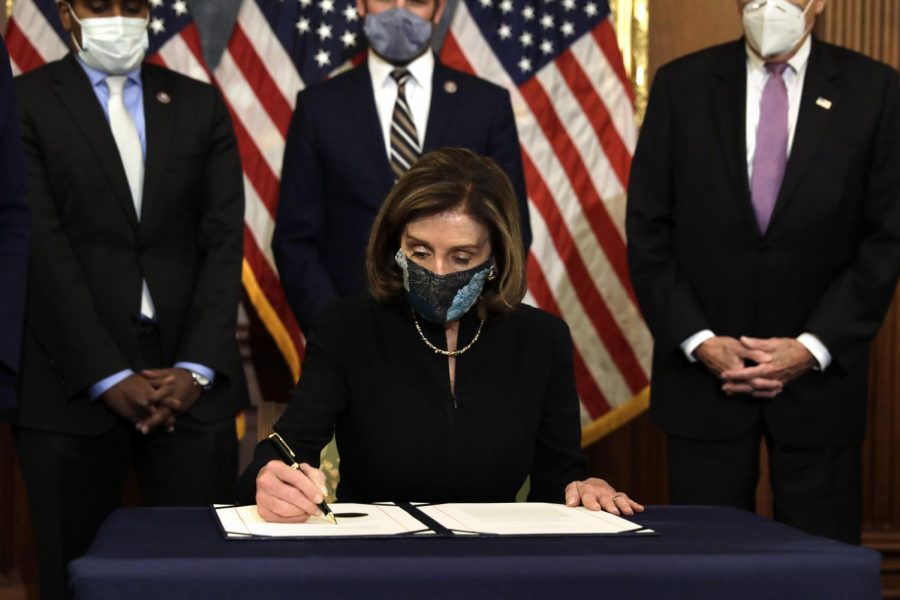 Speaker of the House Nancy Pelosi, D- Calif., signs the article of impeachment against President Donald Trump during an engrossment ceremony on Capitol Hill in Washington, D.C., on Wednesday, Jan. 13, 2021. (Yuri Gripas/Abaca Press/TNS)

“Seems to me, if you can get the citizens of a democracy to no longer agree on what is objectively true in the world, then you have conquered them with all the strength of an invading army,” tweeted astrophysicist Neil deGrasse Tyson last Thursday.

In 1978, cult leader Jim Jones convinced 918 people to kill themselves by drinking cyanide-poisoned Flavor Aid. He told them that intelligence agencies were conspiring against them, that the sect would be invaded by hostile forces and that suicide was the only option. 918 people chose to swallow one man’s lies. Those lies ended up killing them.

Donald Trump is no cult leader, but he has a similar disdain for inconvenient facts. This is no way to run a country. Societies that spurn truth can’t get very far. Groups that believe in convenient fantasies don’t have the wherewithal to conduct healthy debate and solve problems, because they don’t leave room for opposing views or complications. The facts catch up with them in the end. Jonestown was one such example.

Throughout his presidency, Trump has disguised facts as opinions and opinions as facts. He has allowed his millions of supporters to live in fantasy worlds and gave them his blessing to ignore many of the problems facing America today. Some Trump supporters may believe that climate change is not real, but they still feel its effects when catastrophic storms and wildfires ravage their communities. Some want fewer limits on their ability to carry guns, but that doesn’t stop them from becoming victims of public shootings. Some may believe that COVID-19 is a hoax, but that doesn’t stop the disease from infecting and killing them. By choosing to put their fingers in their ears, they have effectively removed themselves from contributing to a solution and left themselves and others vulnerable.

Trump has now been impeached twice. He will leave office on Jan. 20. Though he will no longer hold power in our government, he will leave a dangerous legacy. Among the wreckage left by this president is a noxious, lingering disbelief in facts. Trump led his supporters away from mainstream media and into a world of conspiracy theories and alternate realities. Most media outlets failed to condemn this behavior and call out his statements as untrue, instead choosing phrases like “without proof.” The country’s population now lacks a common understanding of facts, and they’ll hamstring themselves when they try to solve serious problems.

So what do we do? How do we bring the nation back from this situation? Well, for starters, Joe Biden needs to address it early and often, before it festers even more.  He must spend part of his inaugural address reframing our national discourse so that half the country can start to wake up from its dream. Meanwhile, in Congress, both sides of the aisle must acknowledge that our election was free and fair. If they can’t face that fact, we need to vote them out. They must recognize that COVID-19 is still a critical issue. They need to refocus on their constitutional duties and acknowledge that the way Trump conducted himself was not in keeping with constitutional law. He broke the rules. Let’s make wrong, wrong again.