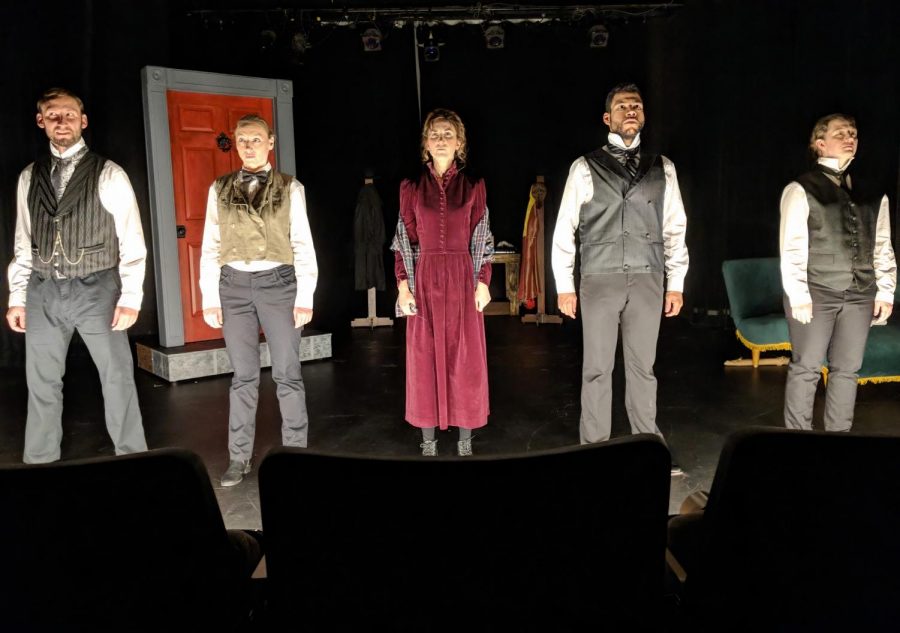 Joseph Zettlemaier is a playwright in Ann Arbor, Michigan. He serves as Artistic Director for the Penny Seats, a local non-profit theater company.  He is also involved with many other theaters, both around  Washtenaw County and the country. The Penny Seats has been an Ann Arbor presence for ten years but has postponed the rest of their 2020 season because of COVID-19.

“It was our first all-year season; we had one show per season,” Zettlemaier said. “We were going to start out with our big fundraiser: our 10 Year Anniversary Gala. This would be followed by an awesome new jukebox musical called Summer of Love, all about the hippie movement in America, featuring bestselling [songs] of the ’60s.  Next would have been our third Penny Dreadful: Our Halloween Gothic horror series, which would have been Ripper by Jacob Marx Rice (about the hunt for Jack the Ripper). And then finally, our first ever Christmas performance, a family-friendly show, written by me, called The Winter Wolf.”

COVID-19 arrived in the US just two weeks after the company had closed their first-ever February play-reading festival, One Day More. It was a two-day event, featuring four plays by Michigan playwrights. The event also served as a celebration of a pivotal achievement for the company:  The Penny Seats recently became the resident theater company at Stone Chalet Inn and Event Center, giving the theater an indoor home for rehearsals and performances. The group planned to perform all future shows — except their popular outdoor summer performances — at Stone Chalet.

When mid-March saw the closure of businesses and schools around the state, Zettlemaier and the Penny Seats board of directors knew they had to make some immediate changes. First, they postponed their 10th Anniversary Gala, which had been scheduled to occur on April 17th.  (They hope to turn the event into an 11th Anniversary Gala, held next year when it is safe to do so). Then, on May 20th, following federal, state, and local guidance, they made the difficult decision to stop all in-person performances, and remount their planned shows at their respective time slots in 2021.

Although the Penny Seats is best known for their outdoor summer musicals, the idea of moving forward with them this year was not in the conversation.

“Summer is really the only time we feel safe doing outdoor theater,” Zettlemaier said. “The problem becomes our inability to keep the actors safe. The actors are still going to have to be close to each other. If there are any romantic scenes, anything like that, it just makes everything much more difficult. So in an attempt to keep literally everyone safe, we just thought it was best to not do any outdoor theater this year.”

Happily, the Penny Seats is in a fairly stable financial situation. Since they rely solely on donors and grants to fund their season, a lot of their funds are intact. Their lease at Stone Chalet is also based on actual use. Thus, unlike many small regional theaters, they did not have to worry about paying monthly rent for an unused theater. Still, some uncertainty remains. Although The Penny Seats is not in danger of closing its doors, Stone Chalet itself is up for sale, which may affect the future of the lease.  Zettlemaier is also very concerned about other theaters in the area.

“I’m someone who makes my living doing theater arts,” Zettlemaier said. “It’s scary because there’s a lot of uncertainty surrounding which theaters are going to come back. American Theater Magazine just did a series of interviews with a bunch of theaters across the country, asking when theaters would shut down for good if no theater happens next year?

Several of them said Summer 2020 is when they’d shut down. Thankfully, The Penny Seats is not in that situation, but it is pretty scary.”

The group aimed to “provide meaningful experiences both to the actors and staff we had planned to work with and to our audience.” With their in-person season on hold, The Penny Seats did not want to go dark this year. Thus, they have offered a series of monthly online play readings, performed in real-time in the Zoom Webinar format, called The Penny Arcade. This event features readings of work from around the country, diverse in style and format, read largely by actors who had been contracted for their 2020 season. One of Zettlemaier’s pieces, The Decade Dance, was featured in July.

“[The virtual series] serves two purposes,” Zettlemaier explained. “For us, it keeps our name out there; it keeps our visibility up. The other reason was that when we shut down, we’d already cast two of our three shows this season, and it broke my heart to have these great actors we were going to work with, not have jobs this year. We’ve been trying to hire as many of those actors back to do these readings as possible, to at least give them something to do.”

Unfortunately, The Penny Seats does not have a set plan for reopening live performances. Since there is no COVID-19 vaccine or timeline for distribution of such a vaccine, it is hard to know when theaters will be back up and running — especially for in-person performances. Although the Penny Seats board has come up with ideas, everything is hypothetical. As it gets colder, theaters with indoor venues worry about safety concerns regarding their audience.

“One of the things I’ve been telling people is, theaters can talk about reopening all they want, but we don’t actually reopen until the audience feels safe,” Zettlemaier said. “The theaters can open their doors, but it doesn’t matter if nobody comes. On so many levels, what we’re really waiting on is, when will people feel safe to come back to the theater? That being said, we are in the process of coming up with some plans that we’re pleased with, but it’s all contingent on when the vaccine and safety procedures are strong enough.”

Zettlemaier is hopeful that this pandemic won’t have many lasting negative effects on the surviving theaters after a vaccine has been produced.

“I would imagine the biggest change that might come out of this is theaters looking at their own finances. Now that we’ve seen what an epidemic can do to theater, how do we shore up our finances? Some theaters have a lot of unnecessary expenditure. For example, buying five couches so you can decide which one couch you want, it’s ridiculous. These are theaters that furloughed their employees, to save the financial stability of the theater. They should not have been making stupid financial decisions like that, not spending money like it’s never gonna run out. There will hopefully be a certain amount of greater fiscal responsibility among theaters.”

He is also hoping that once COVID dissipates, theaters do not feel the need to resurrect it.

“I hope that theaters don’t decide to do plays about COVID,” Zettlemaier said. “ I would love it if no one does that.”

There is no doubt that after this pandemic, the theater scene will look different. Not only will there be a lot fewer theaters, but companies are going to have fewer savings and a smaller budget than they’re used to. The aftermath of this pandemic will continue to hurt theaters for years to come. However, the number of theatergoers appears not to have faded. The Penny Seats is reporting excellent attendance at its monthly readings, and similar efforts by other regional theaters appear to be producing good results as well. This gives Zettelmaier — and the rest of the Michigan theater community — a reason to hope that audiences will be there when the theaters come back.