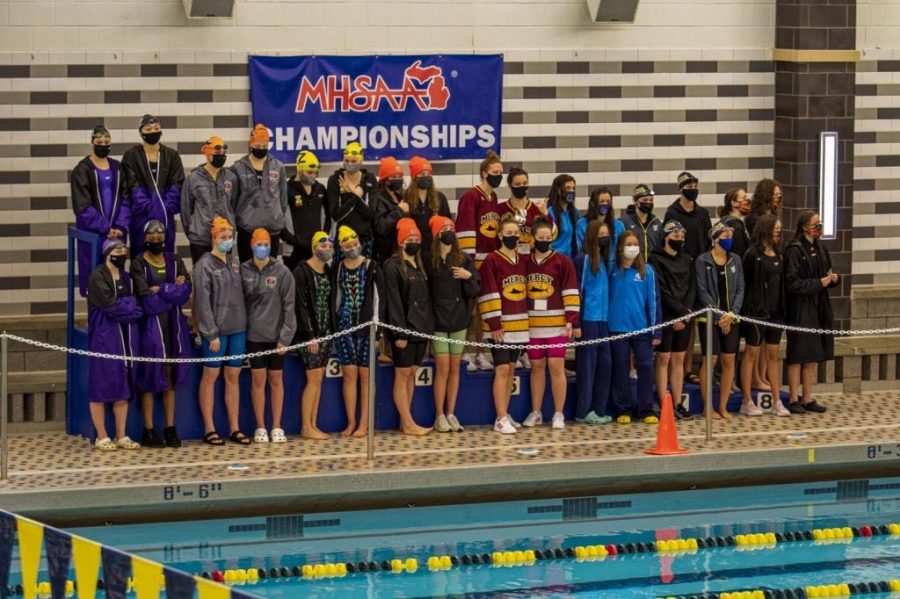 The Pioneers redeemed their second-place finish by scoring a whopping 368 points to Farmington Hills Mercy’s 184 points. Northville finished third with 164 points, ahead of Brighton’s 159 points in fourth place.

The 2020 tournament looked very different from previous years. Due to Covid-19 restrictions, the tournament did allow spectators, and athletes were not allowed to be on site after their individual or relay performances. Despite the changes to the event, Alex Mercier, a CHS junior and diver for PHS, was hoping for a first-place trophy.

“It was almost surreal to win,”  Mercier said. “I didn’t do as well as I wanted in my event, so winning states wasn’t really on my mind. But I knew that our swimmers worked really, really hard and anything could happen.”

The stars aligned, and Pioneer pulled ahead with three relay wins later in the day.

A day later, Mercier received a text from the PHS head coach saying the team won.

“I felt so proud of how well we all did,” Mercier said. “I think the disappointment and frustration of last year’s results pushed us to reach the goal we wanted.”

In particular, PHS junior Vivian VanRenterghem received top honors in the 200-yard freestyle with a time of one minute, 52.34 seconds. With standout performances across the board, the decisive 184 point margin seemed fitting.

Proud of their first championship since 2008, the Pioneers are grateful for their performance and hope for more championships in the future.