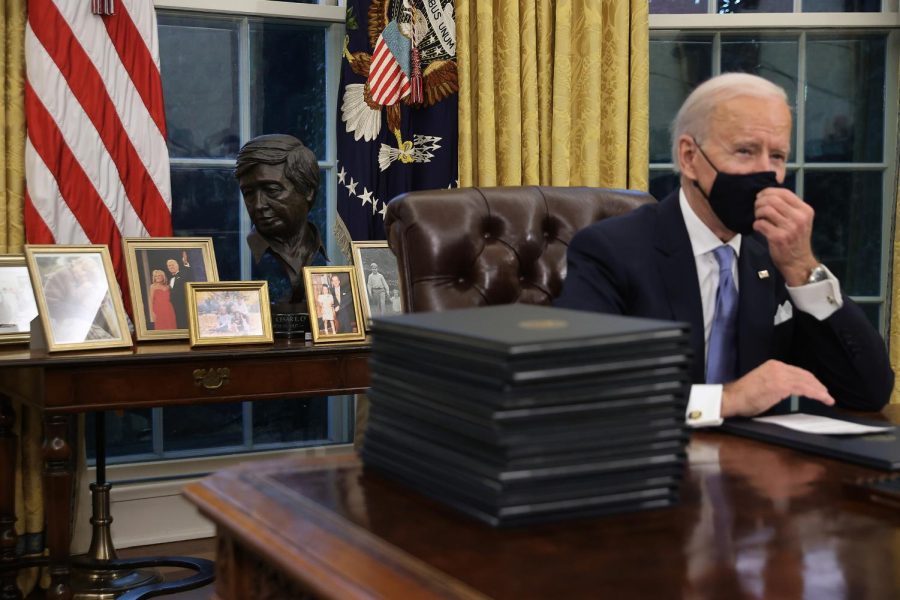 President Joe Biden prepares to sign a series of executive orders at the Resolute Desk in the Oval Office just hours after his inauguration on Wednesday, Jan. 20, 2021, in Washington, D.C. (Chip Somodevilla/Getty Images/TNS)

Simply put, an executive order is a signed, written and published directive from the President of the United States that manages operations of the federal government, directing the President’s own employees to take various actions. Because they’re not legislated, executive orders avoid a lot of the hard, consensus-building work and time it takes to get new laws passed. And they often have effects and make directives similar to statutes. For example, Trump passed his plan for a wall on the US-Mexico border partly by executive order. Before that, Obama did the same with his Deferred Action for Childhood Arrivals (DACA) program. Executive orders can help a newly elected president fulfill campaign promises and play to their political base. Because they can be enacted with the stroke of a pen, they may seem like a shortcut to policymaking.

In fact, there are a few major downsides to executive orders. First, they don’t have the longevity of legislation; they can easily be shut down by a presidential successor. In the modern era, it has been tempting for presidents to rescind many of the previous president’s executive orders. President Trump spent much of his early presidency reversing Obama-era policies. And now, we’re getting to watch Biden do the same to Trump, albeit in more targeted areas. So although it’s tempting — and arguably good PR — to use executive orders early and often, do they really help the country in the long term? What good is a four-year (or eight-year) policy, unless it is drastic enough to make it practically impossible to reverse?

There’s another problem, too: when executive orders look and act too much like laws, they can alienate Congress. If a President gets too used to acting through executive orders, and not through Congress, won’t Congress feel circumvented and be less likely to pass a President’s actual legislative agenda? It’d be especially dangerous for this President to put Congress on the sidelines when unity and bipartisanship appear to be so central to his platform. Pushed too far, Congress could even cast some unilateral orders as executive overreach, asking The Supreme Court to reverse them and restore the separation of powers — President Obama faced exactly this challenge with DACA. If bipartisanship and the hard work of legislating are really as important to Biden as he says they are, he should curb his use of executive orders, and work with Congress on more transformative legislation.

For example, President Biden has an aggressive and ambitious climate plan. It covers everything from carbon emission cuts to making climate change a core national security priority. He is setting much of it into motion through executive orders. On his first day in office, he rejoined the Paris Climate Agreement and has since signed a number of climate-oriented Executive Orders. One places the climate crisis at the center of U.S. foreign policy. Another seeks to reverse Trump-era policies that had an anti-climate or anti-science bent.

President Biden also promises to ensure that the United States has a 100% clean energy economy and reaches net-zero emissions by 2050. It’s a lofty goal, and President Biden cannot simply accomplish it via executive order. How can we get the rest of the world to follow us in our efforts to stop the planet from dying, when they have no assurance we will hold the same position on the issue, in a few years? Biden may face a tough debate in Congress, but the long-term payoff of meaningful climate legislation is more than worth it.

Democrats now control the House and the Senate. There is no better time for them to get legislation passed. Now is the time to open debate, and get some major bills written and passed. The Democratic majority in Congress has a chance to effect lasting policy change. Too much policymaking via executive orders would leave them on the bench.