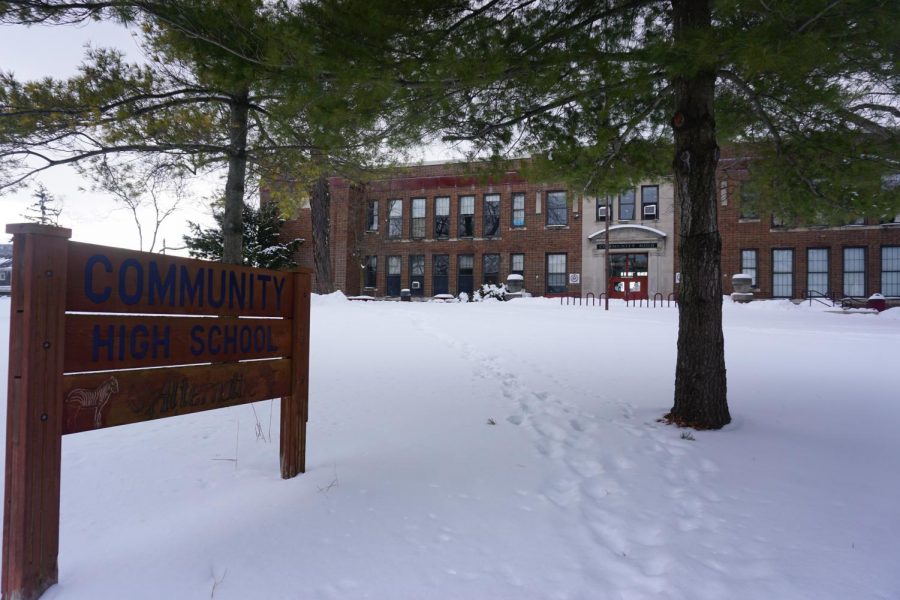 On Feb. 24, the Ann Arbor Public Schools (AAPS) Board of Education will vote on a recommendation from the district’s superintendent, Dr. Jeanice Swift, for the majority of students to remain virtual through the end of the 2020/2021 school year. The decision, and the debate it accompanies, reflects national controversy about how school should be administered amidst a global pandemic.

On Jan. 8, Governor Gretchen Whitmer held a press conference to suggest that schools offer an in-person option to families by March 1, citing possible low transmission rates in schools that mandate masks and other safety measures.
Superintendent Swift shared a four-phase plan to return to in-person instruction on Jan. 13. According to the plan, Young Fives, preschool, kindergarten and students with high learning needs would go back in early March, followed by 1st and 2nd graders, and then 3rd through 5th graders. If everything went smoothly, middle and high schoolers would return in Phase Four, some point after spring break.

Last summer, AAPS established COVID-19 metrics for the surrounding area that they hoped to meet before making a recommendation to return to in-person instruction. The metrics, which have remained constant since September, were a downward trend in case numbers; a goal of seven to 20 cases per million daily sustained over 14 days; and a less than 3% test positivity rate.

As the board met through January to discuss reopening details and steps, the public commentary sessions during board meetings drew widespread community feedback from all sides of the issue.

“We just sort of came together around this concern that we had that Ann Arbor Public Schools… wouldn’t offer any type of in-person learning to most students for a whole year,” said Lena Kauffman, one of A2R2’s co-founders. “Where we came from is just a grassroots group of parents working together.”

As the month of January continued, public commentary at board meetings increased in quantity and urgency: A Jan. 27 meeting saw 85 letters compared to zero on Jan. 8.

“It is beyond belief that Ann Arbor [P]ublic [S]chools have not yet implemented any sort of in-person learning. AAPS continues to fail our students, parents, and teachers by not even offering a hybrid option at this point,” wrote Mike Murphy, an AAPS parent whose family does not “plan to return to AAPS next year.”

On Jan. 29, citing high case rates, a slower than predicted vaccination rollout and the emergence of the more contagious B.1.1.7 COVID-19 variant in Washtenaw County, Swift declined to set a return date but outlined the process the district would follow to return.

A2R2 held a rally on Jan. 30 demanding an in-person choice. They collected donations of personal protective equipment (PPE) for teachers, an essential part of the CDC’s guidelines for a safe return to school.

Meanwhile, at nearby Howell Public Schools, a fully in-person option has been offered for almost the entire year. Students, however, report that not everyone is committed to safety.

“A lot of teachers will correct students’ [mask usage] but then after they walk by that teacher, they just pull it right back down,” said Zoey Rector-Brooks, another Howell senior. She urges schools that are planning for in-person learning to implement mask mandates and to clearly establish the rules and consequences.

As of Feb. 10, Howell High School had 36 cases since reopening last fall. The Howell Public School District did not respond to a request for comment.

As the March 1 goal approached, demands for in-person became louder. On Feb. 7, a total of 379 physicians & psychologists signed a letter calling for an in-person option for families in-line with Whitmer’s recommendation. In the letter, they expressed concern that children with IEPs were not receiving the needed support virtually and agreed with Whitmer that reopening schools should not depend on teacher vaccinations.

“We have learned we can pursue in-person instruction safely, that we’ve got a lot of schools that have been doing this, and they’ve been successful even before vaccines were imminently on the horizon,” Whitmer said at her Jan. 8 press conference.

At a Feb. 10 board meeting, Swift explained why her recommendation to remain operating under a virtual-only plan remained the same.

“Without assistance, Washtenaw schools will continue to be the lowest in-state percent vaccinated personnel while highest in-state rate of community spread,” Swift said.

At the Board’s meeting on Feb. 17, Trustee Susan Baskett motioned for Swift to present a plan for the rest of the year that would bring back students with the greatest needs by March 22 but keep other students virtual through the end of the year. After extended discussion on the meaning and intent of the motion, it passed 5-2, with Board President Bryan Johnson and Vice President Jessica Kelly in the minority.

“My position all along has been that we have developed metrics and are working with experts to open the school buildings when it is safe to do so,” Kelly stated in an email. “There is almost half of a year left, and I believe we will get to a safe spot to open if the trends keep going the way they are.”

Baskett’s motion elicited many varied reactions from the community, including confusion. The Board released an email to the AAPS community intended to clarify the motion, its effects and its intentions. The email made clear that the current plan for a universal hybrid option remained unchanged, but did not mention that the motion bound them to vote on Swift’s recommendation by Feb. 24. Swift’s recommendation — based on Baskett’s motion — would keep students without the “greatest needs” virtual. The full text of the motion can be found here and the recording of the meeting here.

After the Feb. 17 motion, A2R2 began a GoFundMe to fund a political action committee, which surpassed its goal of $30,000 within 24 hours and has raised over $41,000 as of the publishing of this article. An update to the GoFundMe states that the money will be used for legal funds and “non-legal resources, including marketing, accounting, and lobbying services.” The group has additionally hired legal representation from Bodman PLC, a Michigan firm. Bodman PLC declined to comment for this article.

Other letters, petitions and rallies have circulated in the days since. One, released by AAPS teacher Amy Sierzega, supported the Feb. 17 motion for most students to remain virtual through this school year. As of the time of publishing, it has been signed by more than 300 people.

“In light of this unprecedented global pandemic, we the undersigned encourage the AAPS Board of Education to make the unprecedented decision to commit to virtual learning for the remainder of the 2020-21 school year,” the open letter read. “We believe that this decision demonstrates a strong and unwavering commitment to the health and safety of each and every child and adult in our AAPS community, including those who are not directly connected to schools through their employment and/or child(ren).”

Yet another letter, written by Ann Arbor Mayor Christopher Taylor and co-signed by six of the ten Ann Arbor City Council members, was released on Feb. 21 and called for the board to establish a return date, increase in-person learning and outline a plan for the next school year. The mayor and the city council do not have authority over the Board of Education or AAPS.

“COVID has emphasized the uncomfortable fact that homes are neither fully productive nor always safe learning environments,” the letter read. “The extended absence of in-school learning harms the emotional and mental state of students and stresses already stressed families. These harms are universal, but they are compounded among homes with young students and community members who are resource-deprived or who have special needs.”

On Feb. 24, Swift will present the district’s recommendation under Baskett’s new guidelines. The Board will debate the plan and then vote on it. If Swift’s modified plan is approved, it would replace the current one and make an in-person learning option before the summer unlikely for most students. The meeting is scheduled for 12:00 p.m. over Zoom, followed by a recess before a continuation at 7:00 pm. The public commentary request can be found here; commentary will be heard at the beginning of the second portion of the meeting and must be submitted by 4:00 p.m. on Wednesday.