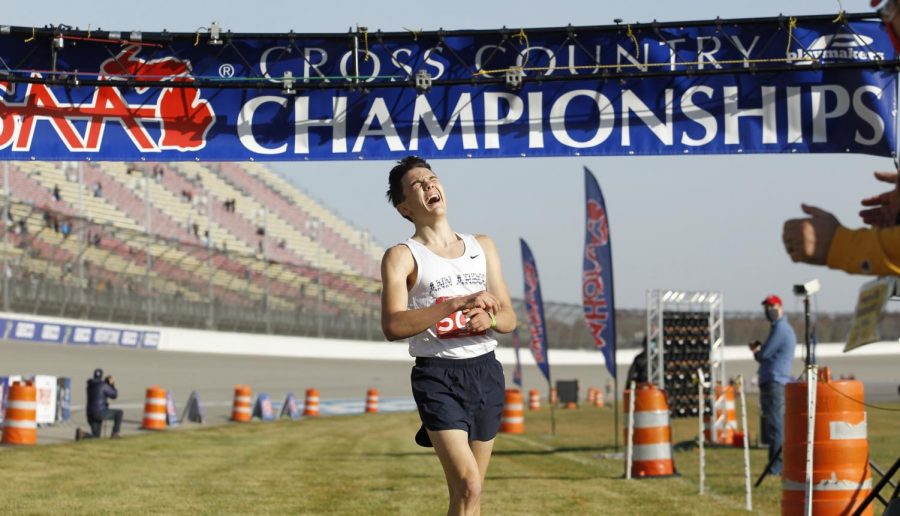 Hobbs Kessler finished in sixth place in the state cross country race during his junior year. But after deciding to focus on running, Kessler ultimately ran a sub-four mile at the American Track League meet in Fayetteville, Ark. on Feb. 7, 2021. “Right before the race, I was really nervous,” Kessler said. “But it all went away. Once the gun went off, I was totally clear-minded, poised and present.”

Hobbs Kessler made it past the finish line at the state cross country meet his junior year. He didn’t place first, second or third. He placed sixth. But when he crossed the line, one thought went through his head: I can win next year.

As a lifelong climber, the transition to running was a slow progression, but after that moment, Kessler decided to fully dedicate himself to running with the goal of winning the following season. Ironically, that didn’t happen — there was no state meet the next season.

Instead, over a year later, in Fayetteville, Ark., Kessler ran at the American Track League meet. Running alongside collegiates and professionals, it was his first big race. He had never officially broken 4:20 in the in – door mile, but his goal was simple: run sub-four.

On Feb. 7, 2021, Kessler ran 3:57.66 — the fastest indoor high school mile ever. As the new national re – cord-holder, he joined the short list of 11 high school milers to ever run sub-four. But while he now holds the fastest time, he wasn’t always focused on running.

Competing against the top kids in the country, Kessler grew up excelling as a climber — not a runner. He had always enjoyed running for fun, but it took until his freshman year of high school for him to seriously start getting involved in cross country — much later than most high school runners of his ilk. After a loving nudge from his parents — both of whom are runners themselves — he joined the Skyline cross country team freshman year.

“I joined to make friends and be a part of that community because [my parents] would say cross country kids are some of the nicest kids,” Kessler said. “And they were. I really got sucked in that way; the people, the team, the coaches, it was a really fun environment.”

During his freshman year running cross country and track, Kessler ran fast. But he wasn’t near a sub-four mile. In fact, his fastest mile, 4:54, was actually the slowest freshman time out of all of the high school runners to ever break four minutes.

“My freshman self would never believe I would break four minutes in high school,” Kessler said.

Between his freshman and junior year, Kessler was still climbing. But he also spent increasingly more time running. During this span, he saw dramatic improvements in his 5k and mile times.

By mid-November of his junior year, Kessler ran an impressive 15:36 5k at the state meet, rapidly improving on a 17:42 freshman performance. This is when he really started to devote himself toward running.

Up until this point, he was putting equal effort into climbing and running at the highest level, but he knew that if his goal was to place first next year at states, he would have to give up his climbing aspirations. Splitting time between running and climbing, trying to be the best in two different areas, simply wasn’t working.

The two sports were battling each other for his attention, time and energy. He had to learn how to let go and stop comparing himself to his peers. He learned to accept that they were going to be better than him.

“[Comparing myself to my climbing peers] got kind of dangerous,” Kessler said. “I realized it’s really hard to be very good at two things. It’s just not possible to be at the highest level for both [sports]. But I still see myself as a climber. I don’t see any intention of stopping.”

After his junior fall season, Kessler was determined to run. But then the pandemic struck, robbing him of all the time with his team in the spring. Losing out on all of this time was hard, but there was one silver lining to all of the disruption caused by the pandemic: the only thing to do was run. Adapting to his situation, Kessler trained very hard during this time and worked to get a solid foundation in.

“I always just think of running as a triangle,” Kessler said. “A 60-60-60 triangle: the bigger the base, the higher you’re going to get. So I really got to build that base, and there was a huge physical benefit.”

There also was a circumstantial benefit. It was during this same time that former University of Michigan cross country coach Ron Warhurst started taking an interest in Kessler. He began to coach him, while also assistant coaching at Skyline. In the midst of the pandemic, elite runners either found themselves quarantined or were unavailable to run in Ann Arbor, and the professional coach needed to coach.

“I invited him to some of my workouts — he started coming, and he saw something in me,” Kessler said. “We became closer and closer and closer, now to the point where I see him every day. We have a super tight bond. He predicted that I’d run fast way before anyone else did. He’s really the one who saw it in me.”

Warhurst coaches New Zealand native and Ann Arbor runner Nick Willis, who also became a mentor of Kessler’s. Kessler found himself in a rare position with an iconic coach and a legendary two-time Olympic medalist mentor who has run a sub-four mile 19 years in a row. And still, he continued to work out with his teammates as well.

Kessler’s fall of 2020 was busy. His training regiment was draining, both mentally and physically. After one demanding workout after another, he was having trouble recovering, and his weekly miles dropped considerably.

“That was really hard because I had never really been in that big of a hole before, and I never really experienced being that tired,” Kessler said. “It was a little scary, like [I was] never going to recover, or if I recover, I’m going to be out of shape. It was just my lack of vision, and I recovered just fine. I was super fit by the state meet from it. I learned to do those big workouts because my body adapted.”

The winter arrived after a nonstop fall season and so did the American Track League meet in Fayetteville. The invitation came six weeks in advance from Kessler’s mentor Willis, and Willis told him it’d be a great opportunity for him to run fast.

As far as training went, in January, they utilized everything Ann Arbor has to offer. Between hill repeats in the Nichols Arboretum and four-minute mile pace intervals at the University of Michigan’s old track, they trained outdoors for weeks in the cold to run a sub-four mile. But in no way does Kessler think living here makes running harder.

“I absolutely do not [feel disadvantaged running in Ann Arbor],” Kessler said. “It’s a little harder to run the [four-minute mile] pace in Michigan right now because it’s so cold, and you have to have a lot of layers on. But so many great runners have come out of Ann Arbor.”

After weeks of preparation, Kessler made it to Fayetteville. As the only 17-year-old and only high schooler in the race, he was understandably nervous. The night before, to ease his nerves, Kessler played Minecraft with his friends, talking and having fun online before the big event.

Then, it was race day.

“Right before the race, I was really nervous,” Kessler said. “But it all went away. Once the gun went off, I was totally clear-minded, poised and present.”

Kessler quickly found himself in last place, but the 200 meter track had a clock every 100 meters, and as long as he saw a zero or a five on the clock, he knew he was on pace. Remaining calm all the way at the back, he moved up little by little when he felt the pace start to slow.

Almost all of a sudden, he was on the penultimate lap. And things could’ve gone wrong when he inadvertently stepped outside of the track. But one of the unique advantages Kessler has from his climbing background is how to handle himself when things go wrong. He knew to not let a small mishap evolve into something larger, and he instead maintained his focus on getting through the last lap.

“I didn’t let that fluster me,” Kessler said. “I did it, and then I finished the race. Any thoughts about that will be for after the race. I put it in the back of my mind and focused on what I have to do. And that comes from climbing.”

Then, with about 300 meters to go, he knew it was time to make it happen.

“[I was thinking] I have an opportunity to break four; let’s not waste it even though I’m uncomfortable,” Kessler said. “It’s only going to hurt for a little bit longer, and then it’s going to be awesome. So I grinded out the last little bit and came in with the time.”

After an extra strong 50-meter kick, moving him from fifth up to third, Kessler read his final time on the clock: 3:57.66. Finishing right behind his mentor, Willis, he completed his season-long goal in early February. He was so focused on just going sub-four that he had no idea that he beat Drew Hunter’s record from 2016 by a margin of 0.15 seconds until someone told him.

“It’s cool to surpass all those people, but somebody’s going to break the record in the future,” Kessler said. “So I’m not too attached to the time. I’m proud that I ran it. But I feel it doesn’t define me as an athlete, and I think I can do better.”

Kessler committed to Northern Arizona University last September, but he has flown under the radar in the running world during his time in high school. He burst onto the running scene relatively late, and his name wasn’t widely known until Feb. 7. Now, after completing his goal to run under four minutes so early, he’s laid out future aspirations — maintaining a focus on what’s in front of him and trying not to get lost in the abstract.

“The end goal is to be a professional runner and make an Olympic team and hopefully bring home some medals,” Kessler said. “Right now, that’s all in the distant future. I’m just trying to focus on what I can control on the day-to-day and not getting my head in the clouds too much with all the hype.”

Kessler’s goals are set for far in advance, but it’s worth noting how quickly he’s improving. For context, most sub-four high school milers run around 4:20 their freshman year. And six months before his race, Kessler’s fastest mile was exactly 4:20. He’s breaking records no one thought he would. And just like his state meet a year prior, he had one thought immediately after the race in Fayetteville: I can go faster.