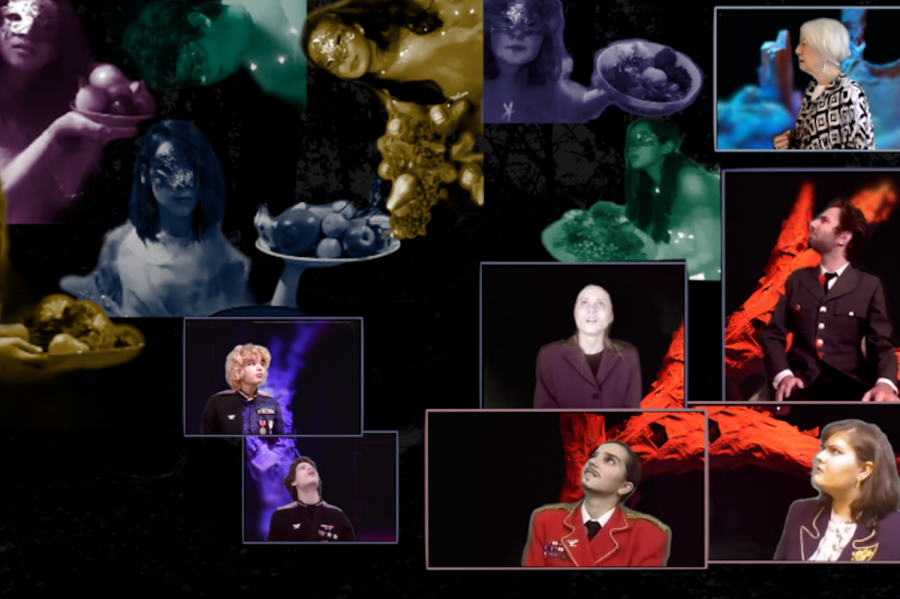 CET films a scene for “The Tempest.” The cast and crew were just two days away from opening night when they were shut down due to Covid-19, and this year, they modified their production to be done entirely online. “I don’t think I could do a full Shakespeare production from scratch in a meaningful way had we started in Zoom,” director Quinn Strassel said. “So much of it is about developing character, exploring language and showing up, and showing up and showing up, and we did a lot of the heavy lifting last year.”

On Feb. 12, 2020, Community Ensemble Theatre (CET) was just over a month away from opening night of their winter production of William Shakespeare’s “The Tempest.” A year later, they released the final act of the show — online.

CET’s in-person production of “The Tempest’’ was shut down on March 11, 2020, two days before their first performance was scheduled. After hearing that their show had been “indefinitely postponed,” many cast and crew members left their classes and flocked to the theater, where director Quinn Strassel assured them that they would finish “The Tempest” when the time was right. Six months later, CET held auditions for their virtual production, which was to be filmed entirely on Zoom and released via live stream as a five-part miniseries.

“I had kind of given up a little bit when I heard,” said Felicity Rosa-Davies, CHS junior and stage manager for “The Tempest.” “It feels like it has really been dragged out a lot in some ways, but also, it’s cool to see how we’ve been able to adapt, even though it has been so much less than ideal.”

As stage manager, Rosa-Davies has attended every rehearsal of “The Tempest,” taking notes on blocking — where actors stand during a scene — and reading lines for actors who are absent. She has seen the process firsthand from beginning to end, and she says her role has changed drastically between the in-person and online versions.

“I have done much less, I think, in online rehearsals than I did in-person,” Rosa- Davies said. “When it was in-person, I used to be able to look at people and take blocking notes, but on Zoom, there’s nowhere for people to move to.”

In January 2021, when Rosa-Davies realized that auditions for the in-person version of “The Tempest” had happened a full year before, she was reminded of how much she had changed during that time. Jasmine Lowenstein, a CHS junior and “The Tempest” cast member, also experienced a period of personal growth during the Covid-19 shutdown, and it has affected her acting.

“I think I’ve grown a lot during quarantine, mainly because I’ve just had time to sit with my thoughts and think about how I see the world and how I see myself,” Lowenstein said. “When I used to act, I was always just thinking about the lines and never fully in the character. But now when I act, I can actually take the place of that character and be the way they’re supposed to be.”

When online rehearsals began in September, Lowenstein was surprised by how much fun they were. Filming the show online felt almost like filming a movie, she said, and watching the livestreams of each act felt like attending her own premiere.
“I was actually super nervous [to watch the show], just because I had already done it, so I couldn’t really control it,” Lowenstein said. “Normally, when I’m on stage, I don’t remember anything. It kind of felt like that.”
As much as she enjoyed the process of an online show, Lowenstein missed the opportunities she would have had in-person to make and strengthen friendships, especially with newer members of the group. The CET student board — which Lowenstein is a member of — has been hosting game nights, which has somewhat helped during a time of lacking peer-to-peer interaction. Despite this, Lowenstein has been struggling to form meaningful connections with her fellow cast and crew members, especially those she didn’t know in person.

“I think the biggest thing I miss is just not getting to know new people as much,” Lowenstein said. “Even though I’ve had some conversations with people I had never met before, it’s harder to get to deeply know people when you’re online.”

Strassel agrees that some aspects of an in-person production are impossible to replicate online.

“That human connection of being in a theater together and creating a form of expression in the same room is obviously something we can’t do,” Strassel said. “I think that we’ve just channeled the spirit of that concept into trying to connect with each other through the lens of our cameras on our devices.”

Strassel has some experience with video editing, so when it became clear that an in-person production would be impossible during the 2020-2021 school year, he immediately began thinking about how to adapt the show that CET had already created into an online production. The fact that the group had already gone through almost the entire process in person made it much easier to start working on the online version.

Going forward, Strassel hopes that this experience will give CET members a deeper appreciation for the work they do and one another, as well as more resilience in the face of future obstacles.

“I think that I have felt connected to the students and to the adults who’ve done this show. I felt a meaningful connection,” Strassel said. “It gives me hope that, if we can get through this, and if we can keep finding ways to be creative in even these circumstances, there’s almost nothing that can stop us. I think there’s real power in rising to this moment together.”