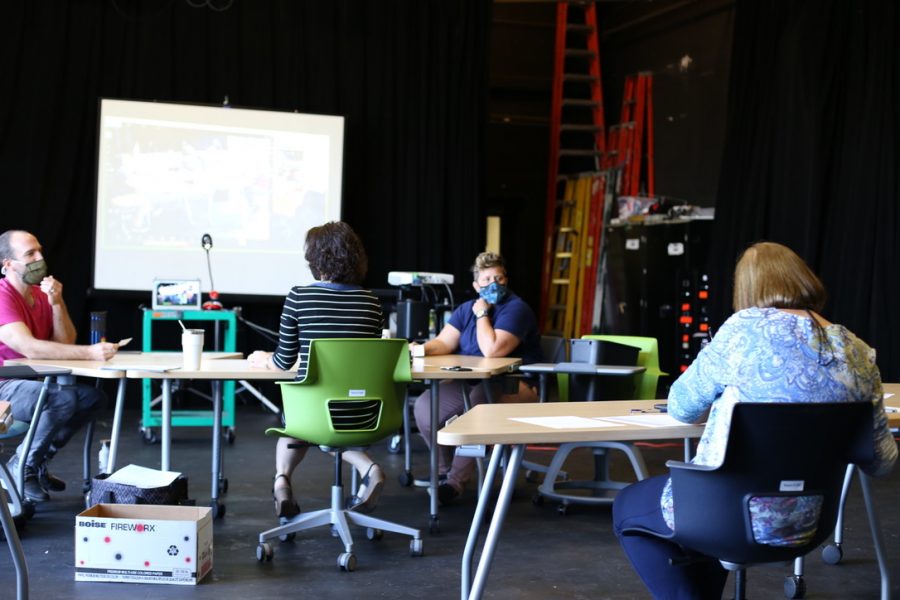 The anticipation in the Craft Theater at Community High School was palpable on April 9 as the CHS administration drew the lottery names for the incoming class of 2025. Compared to recent years, this lottery had a low number of applicants. Beginning around 8:45 a.m., the lottery process lasted about two and a half hours. The application window opened on Tuesday, March 16, and closed Monday, April 5 at 5:00 p.m.

All applicants must meet requirements including grade level, district residency and have submitted their application between March 16-April 5.

In previous years, there has been a mandatory student information session in order to be entered into the lottery. This year, those meetings were held over Zoom and were not required. This was because Dean Marci Tuzinsky did not want any technical issues or family health concerns to get in the way of a student’s eligibility.

The names of applicants were taken directly from InfoSnap and were put into a spreadsheet document. These names were then printed onto indistinguishable business cards to keep the playing field equal.

Upon the approval of the Dean, three foreign exchange students have the opportunity to enroll at CHS. These students are accepted above the target enrollment for that grade and cannot have previously earned a high school diploma in their home country. These students would not be taking any spots from the original 132 students.

Children of the CHS faculty are also accepted above the target enrollment. These students are not entered into the lottery. This is true across all Ann Arbor Public Schools.

CHS does not offer sibling or legacy enrollment. This keeps the lottery fair to everyone.

Staff members, Brian Williams and Amy McLoughlin were assigned to draw student’s names and lottery numbers one by one. This confirmed the double-blindness of the lottery.

To ensure random selection, all nine people in the room were on camera in full view of two observers via Zoom. The selection group consisted of six staff members, one CHS parent and two current students watching the lottery.

“We henceforth commence the class of 2025 lottery for Community High School!” McLoughlin said. With a drumroll from the attendees, the lottery had begun.

Williams pulled the first name out of a black trash bin and McLoughlin announced their lottery number soon after. Three other staff members wrote these corresponding numbers on a sheet while Tuzinsky stapled the names and numbers together.

The paper drawing process, while timely, is the only way to give everyone the same opportunity.

With 295 applicants, there will be 132 students admitted into the 2021-2022 school year, giving students just over a 40% chance of being invited to attend CHS.

These results were posted on April 9, at 7:30 p.m. and the first 132 lottery numbers will be offered a spot at Community High School. The 133rd name will become the first on the waitlist.