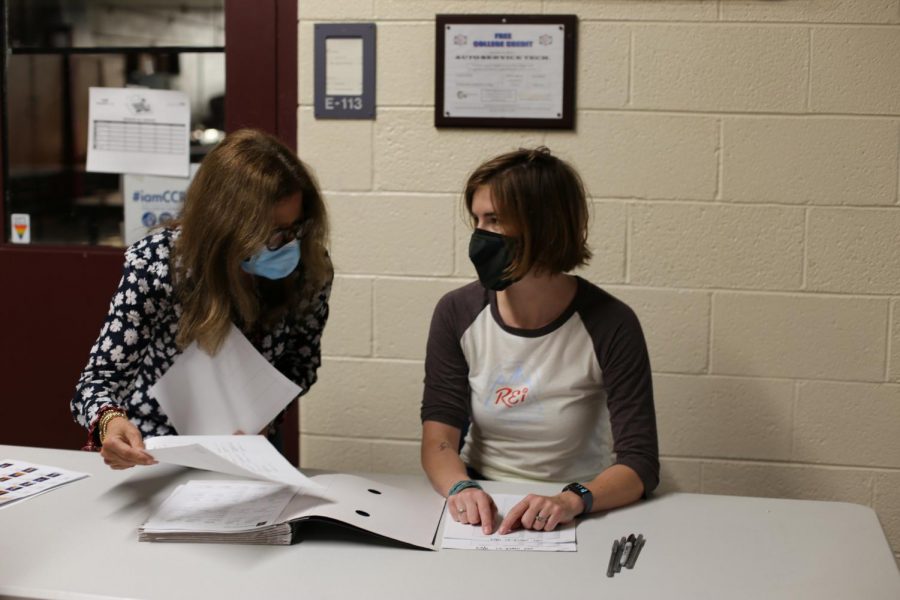 Gretchen Eby and Courtney Kiley worked during the week to check students in for testing.

On Thursday, April 29, ninth graders at CHS participated in optional PSAT testing. Students who opted to engage in testing traveled to Pioneer High School on the wet and rainy morning. They were ushered up the stairs and down unfamiliar hallways before settling in to take their first PSAT 8/9, which they missed out on last spring.

It was inevitable that Ruth Shikanov, a CHS freshman, was going to take the test. Her parents were going to sign her up either way. Luckily, they were in coherence with the decision.

Lined up along the halls of PHS, Shikanov saw some familiar faces.

“I saw some of my teachers today for the first time,” Shikanov said. “It was really weird because I immediately recognized them but they didn’t recognize me.”

Shikanov also spotted some of her classmates. She felt strange seeing them as actual people for the first time, after spending nearly two semesters of school with them on Zoom.

“I feel like what is so special about Community is that since it is small enough that the whole grade gets to know each other, but I don’t really know that many other freshmen,” Shikanov said.

Ailish Kilbride, a CHS freshman, also participated in the testing. Kilbride was initially nervous about entering an unfamiliar environment because she didn’t know what to expect.

“I think taking the test at Pioneer will just make things more uncomfortable and stressful,” Kilbride said. “Being in a completely new environment with a bunch of new faces isn’t ideal.”

After taking the test, Kilbride said that it felt anticlimactic simply because we hadn’t been in a classroom all year. However, her positive experience makes her feel more confident about the return to school in the coming week.

Kilbride felt safe and socially distant from other students while taking the test, which reduced stress for her. She thinks that it’s important to take the test because it’s practice for performing under pressure, and it helps her get a feel for the setup of the real SAT.

Miles McDonald, a CHS freshman, had similar feelings about the test. McDonald said that the test went better than he thought it would, and surprisingly, went by very quickly.

“The environment was tranquil and made it easy to take the test,” McDonald said.

Although the gathering wasn’t at Community, freshmen were able to come together with some of their classmates and teachers and meet them in person for the first time. The faces that have been in a tiny box on a screen since September finally came to life.