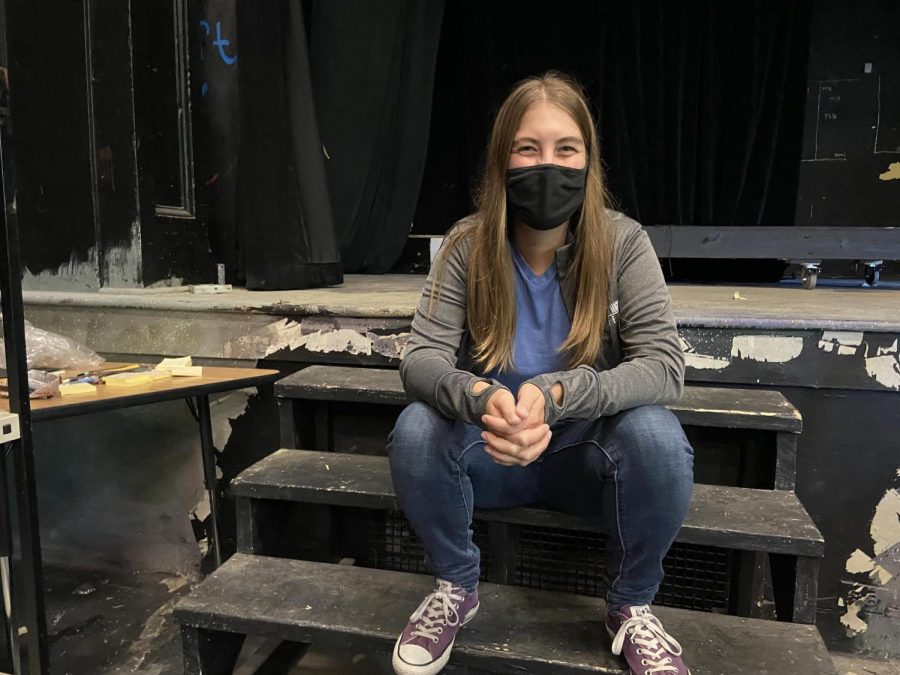 Sarah Hechler sits on the steps of the stage in Craft Theater. As the new tech director of CET, she has spent a lot of time in Community's black box theater.

Sarah Hechler, Community Ensemble Theater (CET)’s new tech director, is devoted to the theater. She first experienced the magic of theater in the basement of her house, when her father would play VHS tapes of old musicals. She remembers absorbing the lyrics of South Pacific and The Mikado while her father, a woodworker, built cabinets next to her.
As she grew older, Hechler spent more and more time in school auditoriums, both in the audience and onstage. Her parents took her to musicals and plays whenever possible, and by the time she was in middle school, she was trying out for every show.
In high school, Hechler moved from acting onstage to working on crew by taking a tech theater class her freshman year. She was exposed to the creativity and tangibility of working on the crew and made deep connections with the adults leading her, especially her own tech director, who remains a close friend to this day. Hechler hopes to use the skills she learned from these adults in order to develop her own leadership.
“It means a lot to me to be able to cycle back now as an adult and be part of it in that way,” Hechler said. “I’m excited to work with really awesome students and people and be part of that collective experience again.”
Hechler wants CET, like Community High School, to be entirely focused on the students. Her goal for this year is to welcome new students into the program and provide as much support as needed. However, she wants to make sure she is not taking up too much room, in order to allow the students to take charge.
“I really want to empower students to take [theater and crew] and make what they want out of it,” Hechler said.
Going into a new year filled with many challenges, Hechler wants CET to be a place for students to feel included and safe. She has always experienced theater as a way to relax and take a break, and she wants to pass this feeling onto her crew members.
“For me, theater means being part of something bigger than yourself,” Hechler said.”It means friendship and it means finding your people. For this piece of time you get to share this experience with the people you’re with and that’s really special.”