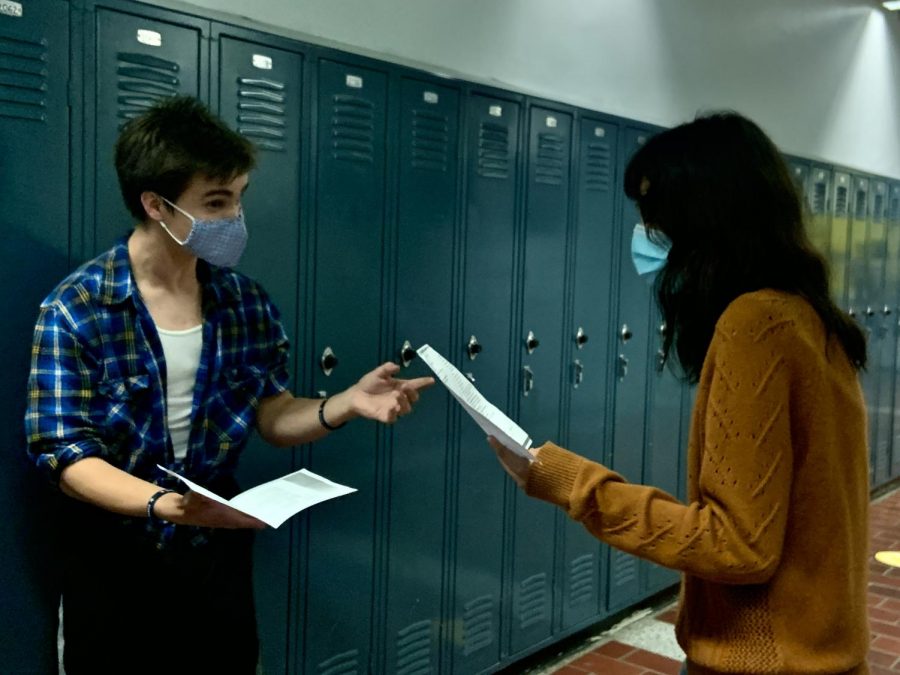 CHS senior John Reed and PHS junior Lana Smith practice reading a scene together at callbacks for "She Kills Monsters".

On Monday, Sept. 13 and Tuesday, Sept. 14, young actors from Community High School waited anxiously outside the Craft Theater to audition for Community Ensemble Theatre’s (CET) fall production, She Kills Monsters.
The play tells the story of a teenage girl, Agnes, who loses her younger sister, Tilly, in a car crash. Agnes finds her sister’s Dungeons & Dragons (D&D) campaign notebook while packing up her room, and decides to play the game to feel closer to her.
Actors were required to pick one of four sides to audition with and could perform the scene alone or with a partner.
“I’m feeling very excited, a little bit nervous,” said CHS freshman, Maia Genisio, shortly before heading into the Craft Theater for her first ever audition. “I’m not sure if I prepared enough.”
Malia Weber, another freshman, was feeling similar to Genisio before her first audition. “I’m feeling mostly nervous, but also really excited because I love acting and performing of all kinds,” Weber said.
On the flip side, Leila Durrie, a freshman, has lots of experience in theatre. She Kills Monsters is her 13th show.
“I think it went really well,” Durrie said. “Right when [my scene partner, Selene Koremenos-Tsebelis, and I] practiced together for the first time a few days ago we were like ‘we have so much chemistry, we should definitely do a scene together.’”
After roles were sent out on Sept. 19, some hopes were crushed, but much excitement still remains in the cast of She Kills Monsters.
“I’m very excited to be one of the monsters because I love D&D, and if I get to fight the main character [Agnes] as a kobold that’ll be very fun,” Gensino said at the first rehearsal for the monster ensemble.
Malia Weber is also happy to be a part of the show. “It’s nice—people in musicals and plays are a tight-knit group,” Weber said.
Leila Durrie is another member of the monsters ensemble, but she was also cast in the featured role of Farrah the Faerie. “I think learning how to play the character and the costumes are really cool,” Durrie said.
Nadya Matish, a junior, is excited to be playing Tilly, the role she wanted in the show. Matish participated in CET during quarantine, and is looking forward to doing in-person theatre once again.
“I like it so much better than Zoom where you just stand in the same place and have your camera,” Matish said. “Here, you actually get to go in the theater and walk around, so I’m excited for that.”