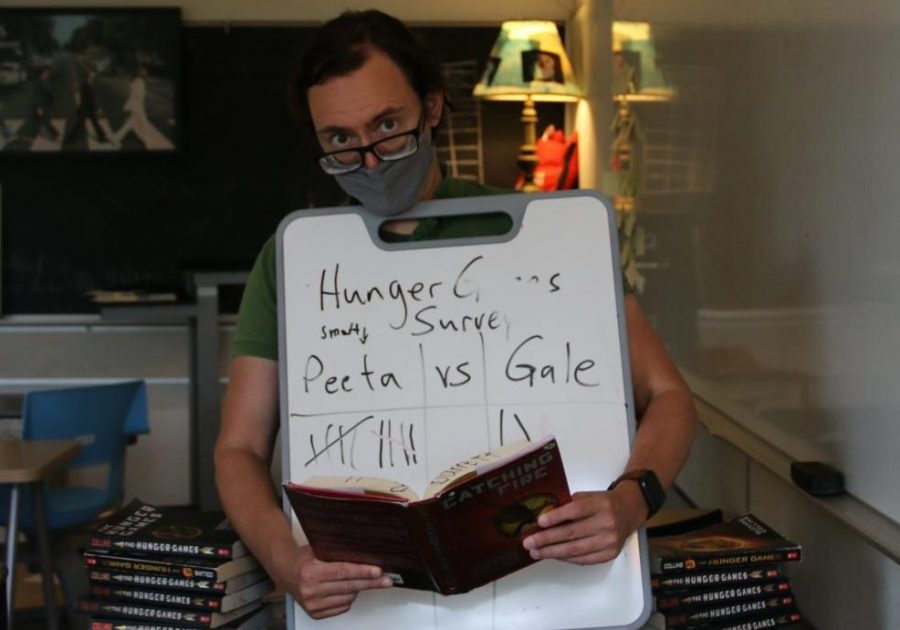 At 9 a.m. on Friday, Oct. 15, Michael Vial, an English teacher at CHS, barged into room 300 with a whiteboard marked with tallies. Students, partaking in their first-block journalism class, sat stupefied in their seats for five seconds before fully comprehending the sign: Hunger Games Survey — Peeta vs Gale. Soon after, the room erupted into a flurry of voices as the students claimed which Hunger Games ship they supported more.

Leading up to the rapid intrusion, Vial had been leading a lesson on allusions to Greek mythology in his first block class when a student asked “the most essential question that we face in the meaning of life today”: team Gale, or team Peeta?

Vial’s answer was immediate and definite: team Peeta. The passion with which he put this forward was frightening and inspiring, making comparisons to previous presidential elections.

Peeta, the common choice, was portrayed in the films as a romantic, kind and gentle partner for Katniss Everdeen, the main character. He had seemingly crept into the scene abruptly, but spent constant time with Katniss throughout the Games, which led to a mutual passion between the two of them. This contrasted with the more stubborn, hot-headed Gale who had known Katniss for many years, but was moved out of the spotlight when the romance between Katniss and Peeta began to form.

“I didn’t know there was still a mighty wind blowing, because voting for Gale is like voting for a fart,” Vial said. “I don’t understand it.”

And so, he set off in a quest for the answer. In a move that he describes as “inadvertent and without a brain cell,” he went into Tracy’s room to seek the opinion of more students, who after a few seconds, began to give their opinion.

Although Gale received some votes, Peeta took the majority. One student, Mia Goldstein, justifies her reasoning in voting for Peeta.

“I just think Peeta is more attractive than Gale,” Goldstein said. “So that’s a leading reason, my other reason is because Peeta is a baker.” She also points out Gale’s flaws, detailing how he seemed to be more the jealous, angry hometown sweetheart that couldn’t move on.

Resolved or not, this issue is one that will be remembered for many years, and will spark debate and conversation in kitchens, cars, and even classrooms.