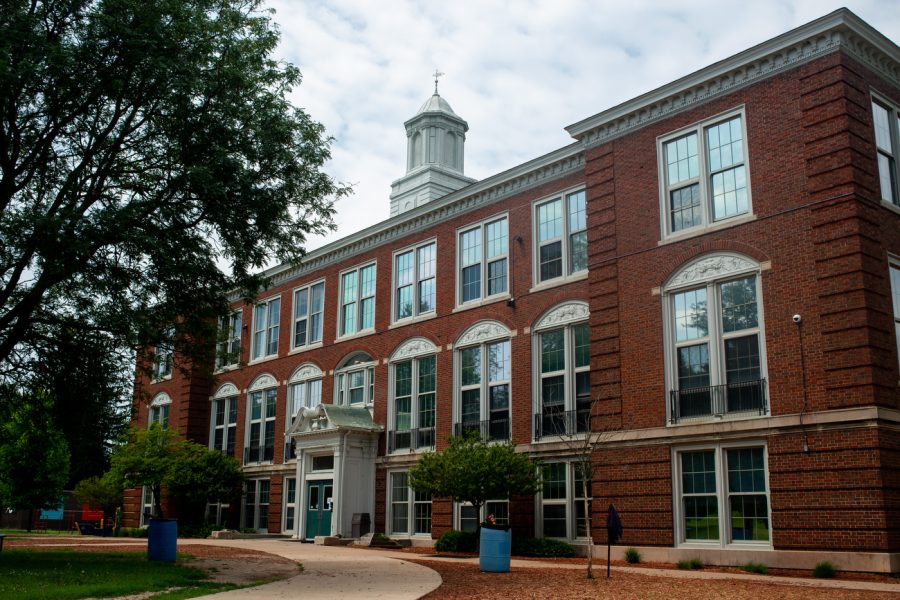 A photo of Burns Park Elementary School, which was affected by the lost gun.

Early in the school day, on Oct. 21, a police officer entered Burns Park Elementary School. She asked to speak to the principal about an incident involving the Burns Park neighborhood: a gun was lost during a walk.
That morning, a member of the community had gone for a walk near Tappan Middle School and Burns Park Elementary. When he got home, he realized that his handgun was not in his coat pocket, where he thought he had left it after returning home from the gun range. He informed the police, who were concerned for the safety of the children in the nearby schools.
Charles Hatt, the Burns Park Elementary School principal, shared this concern. As soon as he heard about the potential danger, he set to work to make sure that the children in his care and the children in the surrounding schools were safe. In conjunction with Tappan Middle School, Hatt and his assistant principal searched all of the students’ backpacks, lockers and school grounds.
A Burns Park and Tappan parent, Laura Hayden, received an email from her seventh-grade daughter detailing these events in the middle of the school day.
“Hey, I’m in math class,” the email read. “We’re in partial lockdown. I guess somebody lost a gun.”
Not long afterward, Hayden received emails from both Tappan and Burns Park, informing her of the situation. Reading them, she recalled her morning walk, during which she saw a man leading two police officers around the neighborhood. She immediately feared for her children.
“Carl, [my youngest child], plays outside all the time,” Hayden said. “We looked up photos of what a snub nose revolver looks like and explained that it’s not a toy and not a part of a Halloween costume.”
When Hatt heard that there might be a gun endangering his students, the first feeling that passed through his mind was anger. Hatt has experience with firearms; he goes hunting every fall with his sons and friends. However, his ideas about handguns differ greatly from those about hunting.
“I [believe] handguns are designed to injure or extinguish human life,” Hatt said. “That’s really what they’re built for.”
Despite his feelings, Hatt knew he had to prioritize the safety of the children in his school before his anger. Hatt reached out to the AAPS safety coordinator to ensure the safety of other schools’ and then focused on communicating with the district and the community.
“One of a principal’s jobs is to represent the administration and the Board of Education and their policies to the community, and to represent the views and perspectives of the community to the administration,” Hatt said. “How do we address this in terms of communication and care for students and families?”
Hatt recognized that he only knew one side of the story and was jumping to conclusions before he had all of the information.
“My first impressions are really limited in accuracy,” Hatt said. “I can have those assumptions, but I should wait to find out as much information as possible before passing judgment.”
Both Hayden and Hatt saw that the person who lost the gun was trying to own up to his mistake by alerting the police and the schools.
“I imagine that the [person who lost the gun] was scared enough to say, ‘I did something wrong,’” Hayden said.
Furthermore, this person was a member of the Burns Park neighborhood, and Hatt knew that living in a community of this size and quality brought with it lasting relationships throughout.
“There needs to be a way to embrace reconciliation in any functional community,” Hatt said. “We can find a path to reconciliation and make peace and learn from mistakes.”