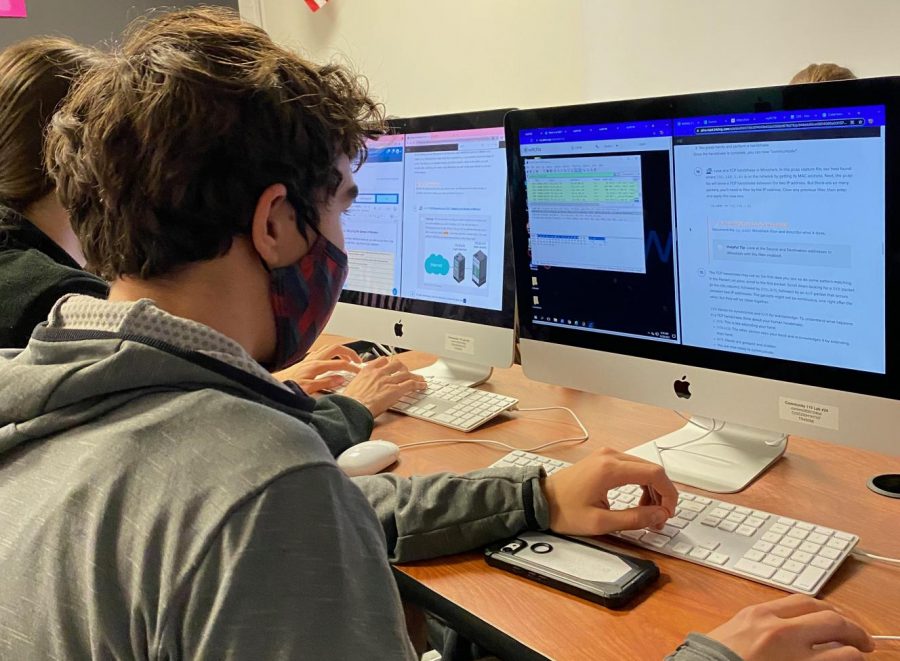 This year, Community High School (CHS) has a new class: Cybersecurity. Taught by computer science teacher George Lancaster, the course covers the basics of defending computers, networks, and the Internet. Sourced from STEM education nonprofit Project Lead The Way, the curriculum includes everything from configuring effective firewalls to investigating digital crimes, all with a thread of career readiness running through.

While students learn how to both identify and exploit vulnerabilities in computers, the main focus of the class is on defense. Senior Gaelen Vanderelzen likes this defensive aspect most: closing security gaps and locking down systems to prevent attackers entering is his favorite part of the class. Most recently, he’s been learning how to patch vulnerabilities in web servers.

“Having SMTP [Simple Mail Transfer Protocol— an email service] enabled creates a vulnerability in the system.” Vanderlezen said. “Since this web server doesn’t need to be running email, it’s better for the server if email is blocked. It’s a pretty typical thing for this class, and particularly this unit, where we’re working with web servers and strengthening [their] security.”

Though Vanderelzen is on the defensive side — a “blue team-er,” in industry parlance — junior Oliver Hiltz-Perron identifies with the red team, on the offense. “I just think it’s more fun to find other peoples’ data than stop people from finding my own,” Hiltz-Perron said.

Hacking and offensive skills aren’t always taught in computer science classes: though simulated offense for security testing purposes is an ethical (and in fact lucrative) skill, in many schools, there’s a pervasive preconception that offensive cybersecurity in any capacity is inherently unethical and illegal. This class, though, doesn’t subscribe to that idea. Instead, it demonstrates offense as well as counters it, albeit with a strong emphasis on ethics and using hacking skills in a legal and productive way.

Recently, Hiltz-Perron has been working on an assignment using handy, fin-iconed network tool Wireshark, an application that “sniffs” and extracts data going in and out of computers on a network. By running commands on one virtual machine and capturing traffic from another, he’s practicing filtering out irrelevant information and identifying outputs that can help him capture better data packets. While Wireshark is a hacking tool, it’s serving an ethical purpose for Hiltz-Perron: in his assignment, it can even stop the spread of malware.

Both Hiltz-Perron and Vanderelzen initially signed up for the class as a fun challenge, as they both already had a passion for programming and wanted to explore a new kind of computer science. However, as they’ve continued through the semester, they’ve found not just a new challenge, but a potential career opportunity.

Cybersecurity as a career is new, high-income, and highly desired by government and private sector alike: the Bureau of Labor Statistics has marked it one of the fastest-growing industries in the country, with more than 16,000 new jobs—and growing—created each year. The new CHS program is part of a sweeping nationwide trend, with cybersecurity programs springing up in schools at record rates to prepare their students for this industry demand.

At CHS, the career-preparedness part of the class is interspersed throughout the online Project Lead The Way curriculum. Most of this is in the form of career exploration: experts featured in the course materials have jobs like penetration testing, where testers get paid to hack into computers and break into buildings to evaluate an organization’s security, or analysis, where analysts determine who’s conducting hacking operations and how to stop them. By design, cybersecurity students can not only leave the semester with knowledge of firewalls and forensics, but with specific and detailed ideas of their potential future careers and where to begin them.

“Hopefully [once finished with the class], I’ll know how to defend a computer, but also how to infiltrate systems and take data: being able to do that seems like a good thing for me career-wise,” said Hiltz-Perron. “There’s a lot of money in computer science, and I think this class is a good thing to know how to do for the future.”