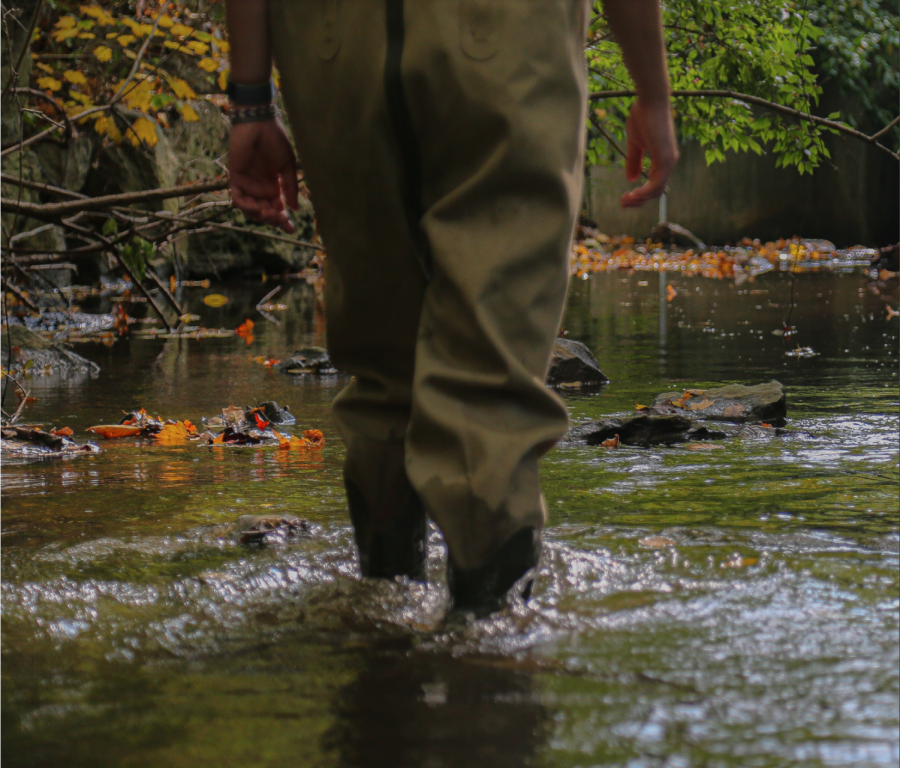 A student wades through Traver Creek for the annual FOS I benthic unit. Current sophomores missed out on this trip last year. “For FOS I, one of the cool things about doing [the field trip to Traver Creek] is the fact that you’re actually out there doing real science out in the field,” West said.

Kids chattered as they walked over the Broadway Bridge during the first week of school. They stopped to look at the river below, swiftly bubbling over rapids, rounding the bend and flowing just out of sight. They continued on their way down the street, off the bridge and down to a plot of grass and trees mostly forgotten to those speeding by in their cars. Hidden by the trees was a creek, and the students stopped there along its banks and watched the water below.

“For FOS I, one of the cool things about doing that [the field trip to Traver Creek] is the fact that you’re actually out there doing real science out in the field,” Christia West, a Foundations of Science (FOS) II teacher at Community High School (CHS), said. “We wanted to have that be a real, authentic experience for students.”

The visit to Traver Creek is an annual science field trip for freshman students studying ecology. The goal in a normal year is to assess the health of Traver Creek by counting benthics, the small creatures that live along the creek bottom. Current sophomores and FOS II students missed that experience last year due to the pandemic. Courtney Kiley, a FOS teacher at CHS, explained that the FOS I teachers went to the creek while school was online to take pictures and videos. They wanted to put the creek in context for the students who were at home at the time. West explained that identifying a benthic out in its natural habitat is different from identifying it from a high-definition photograph.

“Rather than just memorizing facts about [benthics], learning more about where they actually live [and] what they actually look like would have helped learn about it,” David Guikema, a current FOS II student said. “Even if Courtney went down to the creek with a GoPro and filmed everything that she saw, I don’t think that would be the same experience. Having the autonomy and being able to explore by yourself and see it with your own eyes, that’s really important.”

Just because the students got to go to the creek themselves this year does not mean everyone used the opportunity to have that experience, though.

“I just wanted to give [the students] a chance to see it, [and] I think they were sad that they didn’t get to do the whole thing with waders and nets.” Kiley said. “I jumped in the water, I picked up a rock, and on the bottom of it found a water penny, which is a very rare, super pollution intolerant bug and I was really excited because I’d never found one before, and the kids are like, ‘what…’ like, [were not] showing my enthusiasm in general, some kids were, but there was a lot of standing around on their cell phones just underwhelmed.”

In addition, West found that some students didn’t express much interest in the creek.

“I think they’re just not interested and that’s okay. Not everybody is going to be super passionate about [finding benthics], because we all have different passions,” West said.

However, she thinks those students still got something out of the trip.

“Anytime you look at how things happen in the world, [it] expands your worldview,” West said. “Those experiences are good whether or not it’s your thing.”

“It’s been a while, so I don’t remember much about what we did last year,” Eve Sarnecki said. She is a current FOS II student at CHS. She does not think she lost much by not going to Traver Creek last year and she thinks she may have preferred learning about benthics online as compared to going out in the field. Not everybody has the same learning preferences. Some may thrive in an online environment, but others may prefer learning in person.

“I think I could learn [the benthics] because I have a really good memory naturally so memorizing facts and retaining them for long enough to take a test is easy for me,” Guikema said. “But I would imagine that [going to the creek] would definitely have helped [other students] learn and remember because it’s much more meaningful.”

At the end of the class period, the students said goodbye to the creek, walked back over the bridge and up the street to CHS to resume their classes as sophomores. Their FOS I experience was as complete as it could be.

“It was really fun to be back there and I really missed it,” Kiley said. “[The FOS II classes] found some amazing things this year.”