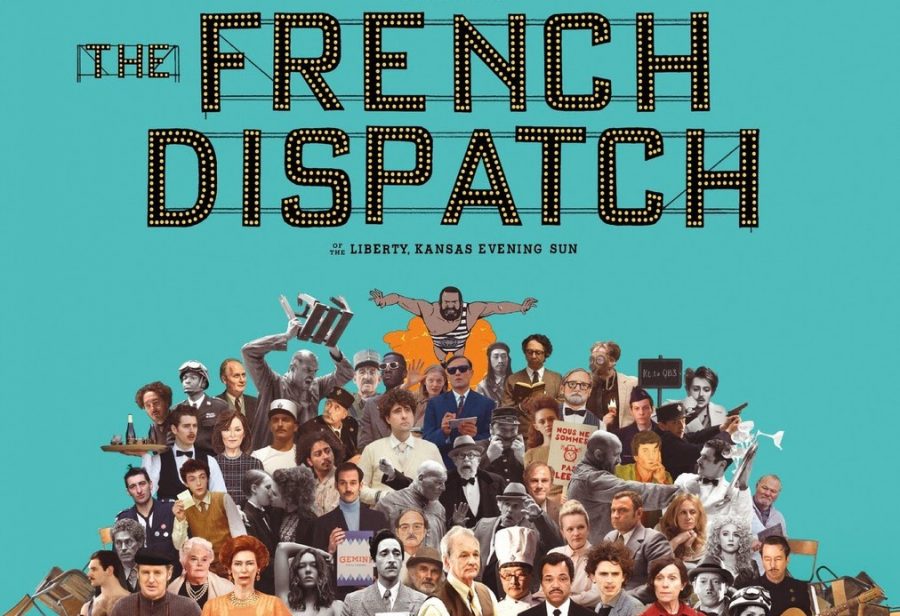 On Oct. 22, “The French Dispatch” directed by Wes Anderson was released worldwide. The film is Anderson’s tenth feature length, and possibly his most ambitious to date. With a cast list that has more depth than most, the film is filled with an outrageous number of Hollywood stars. From old timers like Bill Murray, to rising stars like ​​Timothée Chalamet, the cast list is stacked to the rim.
The plot revolves around a group of journalists, with different members of the staff going on different experiences with the goal of finding a story and publishing their magazine, titled “The French Dispatch”.
The film is very abstract on its surface; with the story essentially split up into three different main sections, along with prologue and epilogue pieces. The sections are meant to act as sections of the magazine itself, so by the end of the story you have experienced the full publication.
The first main section is about a mentally ill artist who serves a sentence in prison. He spends his days working on his art pieces and creates a nude portrait of a security officer working at his prison. After receiving praise for his work by an art dealer, the story takes off as his piece gains traction. Starring Benicio Del Toro as the prisoner, his performance definitely stands out. He perfectly captures the essence of his character and the facial expressions and line delivery always felt meaningful. Léa Seydoux plays the security officer, and she also does an amazing job. She captures her side of the story perfectly and plays an essential part of what makes the plot so intriguing. Her relationship with Del Toro’s character was so engaging and could be seen as the best chemistry of the whole movie. This story is my personal favorite of the film as I feel like it has the most heart.
The second section takes place in a fictional French city called “Ennui”. Lucinda Krementz, played by Frances McDormand, decides as a journalist on the staff to go to Ennui and write about student riots taking place. The leader of the riots, Zeffirelli, is played by ​​Timothée Chalamet.
This section, along with the others, flipped from color to black and white many times, and it felt uninspired at moments. Color always worked when active in this film. I think they should’ve just stuck with it.
The third section follows a journalist’s appearance on a television show where he recites his experience attending a private dinner with the Commissioner of the Ennui police force. Jeffrey Wright steals the show during this section playing the journalist. The color palette presented during this section was pleasing, but the story felt the least engaging of the three. It felt spread out and didn’t draw my full attention until the ending act.
“The French Dispatch” is very abstract when it comes to the way it presents itself. At times you may find it hard to follow, but if you stick with it it’s an enjoyable watch. I tended to feel excited while watching the film, for reasons like the humor which always landed and the fresh world building which was satisfying and appealing to the eye. If I were to give this a rating out of five stars, it’d give it four because while I don’t think it’s perfect, it’s one of the most fun movies of the year and is definitely worth the watch.